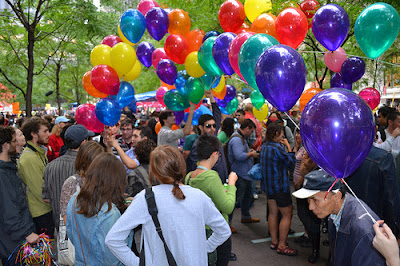 I confess I have not paid much attention to the Occupy Wall Street protest. Watching New York cops arrest whole bunches of them on the Brooklyn Bridge for obstructing traffic was briefly entertaining, but it occurred to me I had no idea why they were protesting except for the fact that they were mostly young, mostly unemployed, and mostly led by the usual demonic Communists that have a beef with American exceptionalism.

As a sign of the times, Occupy Wall Street has a spiffy website, but it is filled with the most ignorant nonsense right out of the Communist Manifesto. Apparently the protesters have identified banks and corporations as the enemy. If you ask bankers and Wall Street folks, they will tell you the enemy is the federal government and they would be right.

Bankers and Wall Street want stability and predictability. They want to pile up money and loan it out to make more money or they want to sell stocks and make bets on which will go up and which will not. It’s called Capitalism and it works unless the government gets deeply involved in telling them what to do and picking winners and losers in the free market.

In the case of the most recent financial crisis, the government got into the home mortgage market back in the 1930s during the Great Depression. Fannie Mae and later Freddie Mac were set up to purchase mortgages from banks in order to “stimulate” the housing market.

You can read the U.S. Constitution from beginning to end and not find the words “housing market” in there anywhere. The house of cards the federal government created, combined with the pressure brought to bear on bankers to make “ninja” loans (no job, no assets) resulting in the 2008 meltdown when the “bundled” mortgages turned out to be worthless and generally untraceable. Wall Street didn’t create this, Washington did.

Of course, none of this means anything to those protesting in Zuccotti Park and elsewhere. It’s not a protest. It’s an excuse to party. Occasionally Leftist celebrities show up and shake hands with “the people” to give them a thrill. Then they go back to their tenured university faculty jobs, making movies and being hideously overpaid for doing so, and looking for a dictator to hug.

Journalists who have tried to determine what the protest is about have come up empty. Brad Knickerbocker, writing for the Christian Science Monitor, noted that “there’s no 10-point list of demands to be nailed Martin-Luther-like to the business and media establishment’s door.”

West is apparently unaware that the political consciousness of Americans has already been raised by the worst presidency in the history of the nation or that Republicans are heatedly debating who they want to elect to replace it. Democrats, too, because quite a few are looking at Mitt Romney with something close to affection.

Andrew Goodman of The Wall Street Journal reported that “Many of the protesters are young. Joblessness seems to be a persistent theme.” No surprises here. Goodman reported that a list of grievances has been circulating among the protesters and, “Among the complaints: bank executives who received ‘exorbitant’ bonuses not long after receiving taxpayer bailouts” and, even I would be happy to protest that.

An October 3rd Gateway Pundit report has listed 13 Occupy Wall Street demands and they read like an Obama-inspired wet dream. They include a universal single payer healthcare system, guaranteed living wage income regardless of employment, free college education, a trillion dollars in infrastructure projects, a trillion dollars in “ecological restoration”, open borders migration, and the immediate across the board debt forgiveness for all.

They are the demands of imbeciles.

You can find a lot of them camped out in lower Manhattan these days. Just wait until the nights turn really cold. They will go home to mommy and daddy.

Correction
ninja = "no income, no job or assets"
A good security for a loan.

I posted this comment about the protesters on another blog so I am copying and pasting it here.

They don't make any sense. I have a nephew who was in college who voted for Obama and actually thought he was going to get free everything. He really believes that you and I should share our hard earned dollars with him who does nothing since getting kicked out of school. He sponges off of his Mom (my sister) Can't hold a job and has never worked long enough to buy a car so must be chauffeured everywhere. I have argued with him until I want to pull off his head and spit down his throat.

If all of these kids protesting are like my nephew...We are in a heap big trouble.

I read that *list of demands*, I didn't see *FREE POT and unlimited Cheetos* on the list..

I was kinda surprised...

A few months ago I was in Columbus, Ohio when the public employee union members gathered there to protest Issue 5 at the state house. Two guys walked around the state house for hours with a sign saying; "Tea Partiers, Get a Job!” I have chuckled over that ever since. Somehow he seems to have developed a glitch in his logic center. He was there because he either didn't have a job or took off work, and they weren't there because they had jobs, and they stayed home to do them. I find this much the same.

People who have no practical experience in running a business, never met a payroll, never worried about making the payments to the bank, never had to work for months on end without drawing a paycheck so that the employees checks wouldn't bounce are now telling everyone how the world's economy needs to be changed. And changed in such a way that no demands will ever be made on them while allowing them to make unending demands on others. Those others are called the "evil rich", and they won't be satisfied until these “evil” ones are eliminated.

Then they will never have to worry about their jobs or the economy because there won't any jobs or an economy.

I do wish someone from this crowd would read a history book once in a while starting with the Soviet Union, especially the early years. The only glitch to that is that they would probably start by reading Noam Chomsky or Howard Zinn.

Sigh! The hippies of the 60's have returned full-force. It was quite funny to watch Fox News the other day when one of the reporters asked one of the young protesting males what he was protesting about. Capitalism, he shouted. The reporter then asked what would he like to see improved with the system? The young idiot couldn't put a coherent sentence together. He stood there with a mouth full of teeth - you could almost see the smoke coming out of his ears as his brain was finally challenged to think. You see, he himself didn't know what he was protesting nor his solution. Another brain washed kid from the fine unionised education system. Sigh.

If you haven't seen this, it's a must watch. It pretty much explains what we're dealing with ...

MammaBear, you will get a kick out of this ....

@Guy in Ohio....Judge Judy was dealing with a young man just like my nephew! Did you hear her call him a moron...LOL!

That's why I posted it Mama Bear... When I read your comment, that clip immediately came to mind. The sad thing is that we are being overwhelmed by people just like that. They believe that we OWE them everything, and they owe us nothing in return, and if they fail, it's our fault. I wasn't raised that way, and I can't help but think that if this is how people are raising their children today, we are in serious trouble.