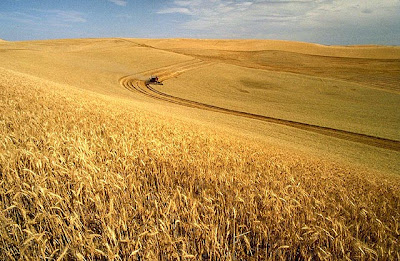 My late Mother used to bake her own breads, along with cookies, cakes, and pies. I miss the taste of freshly baked bread and I miss the aroma that floated from the kitchen to the rest of the house. The author of several cookbooks, she knew a lot about the history of foods. Much of history was shaped by the development of agriculture, the growing of grains.

In the Middle East, it wasn’t called the Fertile Crescent for nothing. In Rome there were public ovens. The bakers of ancient Greece had a worldwide reputation. Much later when French peasants could not get bread, it sparked a revolution. “Let them eat cake” cost Marie Antoinette her head!

Great famines have marked history as well. There is a reason why bread is called the staff of life and there is a reason to keep an eye on today’s worldwide market for wheat. It reflects the competition between nations for the sale of this vital commodity.

Casting an eye over the world, one learns that Syria, in the midst of the riots to overthrow the Assad dictatorship, the more mundane business of the country goes on including the announcement that it plans to sell 50,000 tons of durum in extra stock bought from farmers last year.

Wheat Life, a publication of the Washington Growers of Wheat Association, monitors the global wheat market for its readers. Suffice to say that wheat is a major export for the U.S., generating billions in revenue every year. According to the U.S. Department of Agriculture, U.S. wheat exports will reach 31.3 million metric tons (mmt) in 2011 and 2012.

Farmers, as always, are dependent on the weather and other factors over which they have no control. In the U.S. the environmental movement has often been responsible for shutting off their access to water to “save” some reptile or other species. The EPA is trying to define “dust”, a by-product of farming, as a “pollutant.” This kind of regulation has a serious impact on the availability of all manner of foods at your local supermarket, in restaurants, and bakeries.

Since the growth of all vegetation, including wheat, is dependent on an abundance of carbon dioxide (CO2) in the atmosphere, the demand by global warming hucksters that emissions of this vital gas be reduced is idiotic, either domestically or worldwide.

But I digress. The fact that the world is now home to seven billion hungry humans will put a lot of pressure on farmers to produce more wheat, rice and other grains.

In 2007 India banned the export of wheat, but “large crops and inefficient storage centers means large quantities of India’s crop is spoiled every year.” India’s politicians are under a lot of pressure to ensure that the price of wheat remains within reach of its millions of poor people. Recently, however, India announced that it would allow private companies to export two million metric tons from its 86 mmt annual yield. That would make India the world’s second largest wheat producer after China.

China, however, is paying a price for the expansion of its wheat production. The Chinese Academy of Sciences says that the overuse of chemical fertilizers for the past thirty years is causing the deterioration of arable soil. When you have more than a billion people to feed, it poses a problem that could translate into political unrest, so the Chinese leadership pays a lot of attention to such things.

According to the U.S. Department of Agriculture, Russia’s export of wheat is expected to quadruple from last year to 16 mmt. In 2010, a hot summer that resulted in poor production led to a ban on wheat exports. The demand for Russian wheat has “outstripped the ability of the ports to handle it.” Former Soviet satellite nations such as Bulgaria and the Ukraine have had a banner year for wheat production.

This in turn has knocked Pakistan’s wheat producers out of the competitive marketplace despite the fact that it is the Middle East’s third largest wheat producer. Its expected exports of 3 mmt have been reduced to 1.8 mmt. Along with all its other problems, the excess wheat is likely to be dumped on the domestic market, driving prices downward.

From nation to nation, wheat, whether in abundance or the lack thereof, affects their internal affairs in ways that only rarely make headlines, but it remains as valuable as oil and other commodities that shape policies.

I understand what you mean when you speak of the deterioration of Chinese wheatland soil due to overuse of fertilisers. Our home stands on land which, until 25 years back constituted sugar cane fields. That whole process is heavily driven by application of artificial fertilisers. As a result, our slice of land provides us with a stubbly lawn and just about no vegetable-growing potential. But it is home!