Big Brother, the Internet, and Your Right of Privacy 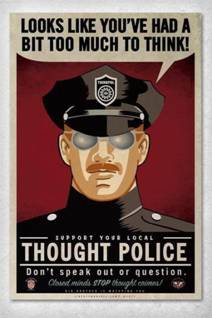 Most Americans assume that they have a right of privacy guaranteed by the U.S. Constitution and, while several of the Bill of Rights imply this right, it is not specifically expressed.

However, it is understood. In a Supreme Court case, Meyer v Nebraska, 1923, Justice McReynolds perhaps said it best:

"While this court has not attempted to define with exactness the liberty thus guaranteed, the term has received much consideration and some of the included things have been definitely stated. Without doubt, it denotes not merely freedom from bodily restraint but also the right of the individual to contract, to engage in any of the common occupations of life, to acquire useful knowledge, to marry, establish a home and bring up children, to worship God according to the dictates of his own conscience, and generally to enjoy those privileges long recognized at common law as essential to the orderly pursuit of happiness by free men."

So, yes, a right of privacy does exist, but it may not exist for long.

There have been three attempts by Congress to exercise control over the Internet including the Cyber Intelligence Sharing and Protection Act that would empower the companies we depend upon for access to the Internet to collect information on our activities, share it with the government, while refusing to notify us that our Internet use is being monitored. In basic terms, all our emails, Skype chats, web searches and other activities would be made known to a faceless governmental bureaucracy.

This is being put forward as a means to fight the so-called “war on terror” or to thwart cyber attacks.

Alan Gottlieb, a longtime advocate of the Second Amendment, has just created www.nointernettax.org to alert Americans to yet another threat to our privacy to oppose any kind of an Internet tax.

At the state level, the National Governor’s Association has introduced the Streamlined Sales Tax Project (SSTP) for the purpose of establishing a “national collection center” to monitor and audit your Internet purchases. All your personal information and Internet shopping choices would be administered by “a trusted third party” or government body. An alternative would enable to subscribe to a national “cartel” tax collection system. It is unconstitution.

It is in essence the imposition of a national sales tax to fill the coffers of states that have demonstrated an inability to exercise prudence in the way they spend the taxes they already collect.

At the federal level, Sen. Dick Durbin has introduced S. 1452, the “Main Street Fairness Act” and has sponsored S. 1832, the “Marketplace Fairness Act.” Any time you see or hear the words “fair” or “fairness” it is a subterfuge for the redistribution of your wealth and the right of the government to know every aspect of your life. The Durbin legislation would require online retailers to pay sale tax on their transactions, thus yield million for state government.

H.R. 1981 is yet another similar piece of legislation. Under the guise of protecting children from pornography, it would require online service provides to, as Gottlieb points out, “spy on your online activities and provide that information to the government. H.R. 1981 “is all about data retention and requires Internet service providers to keep detailed records of your internet activity, your name, address, bank account numbers, and credit card numbers.”

This kind of effort at totalitarian control exists at the international level insofar as the United Nations has long wanted to impose a world tax on Internet users with a special emphasis on financial transactions. In February, the U.S. Commission on Social Development introduced this form of taxation to support a “social protection floor.” It is a direct attack on capitalism which the communist-based U.N. justifies as its own version of a redistribution of wealth. Need it be said that the idea is being supported by Russia, China, India and Brazil among a number of nations seeking to control Internet transactions.

As Gottlieb points out, you already pay taxes on the Internet. “It is taxed in the same way that catalogues, mail order and TV sales are.” Indeed, “Every time you access the Internet, you are paying telecommunications taxes.” Online purchases that are not taxed include travel and financial services, vital to the vitality of the economy.

In 1998, President Bill Clinton signed the Internet Tax Freedom Act into law. It prevents governments from taxing Internet-only activities such as bandwidth, email, or the imposition of multiple taxes on any kind of electronic commerce. It will expire on November 1, 2012 unless extended by Congress.

Gottlieb notes that there are more than 30,000 state and local governments and 7,600 taxing authorities extant in the nation. As we know, most states are in serious financial difficulties, often as the result of government worker unions with which they have signed contracts that provide bountiful retirement and health benefits.

I recommend that you visit http://www.nointernettax.org/ and learn more and then to take action by writing, faxing or emailing your Senators and Representatives to let them know of your opposition to these efforts.

The United States imposes the highest corporate tax in the world and has an unfathomable tax system that sucks vast amounts of money from its citizens. It is $15 trillion in debt because it will not impose any limits on its spending. If any of the proposed measures are passed, not just more of your personal income be tapped, but your privacy will disappear.