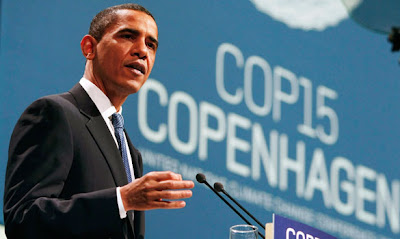 Editor's Note: All this week in the run-up to Earth Day, this blog will post commentaries exposing environmentalism as the totalitarian ideology it has always been.

As the nation and the world closes in on Earth Day, April 22nd, a tsunami of Green propaganda will overwhelm us with all the usual lies about global warming—now called climate change—and calls to reduce the use of all fossil fuels in order to reduce “greenhouse gas” emissions.

The past three and a half years of the having Barack Obama as President have been filled with constant crisis, not the least of which was the nation’s financial crisis which he constantly reminds us he “inherited.” He has not, however, solved it with proven ways to put millions back to work and turn around a stagnant economy.

Instead he devoted his best efforts to a takeover of one-sixth of the nation’s economy, the healthcare industry. His administration has waged a steady war on access to energy reserves vital to the nation’s economy. The result of these policies are being felt at the gas pump as prices rise to historic highs while billions of barrels of oil in the U.S. remain underground.

His devotion to all the eco-lies was seen in the millions wasted on “green jobs” with his failed “stimulus” and loans to “green industries”, primarily wind and solar power. Other schemes included high-speed trains where none are needed or wanted. To this day Amtrak has never made a profit. And electric cars remain impractical and unaffordable.

His environmental commitment was perhaps best seen and heard when Obama attended a United Nations Conference of Parties in Copenhagen in March 2010. His speech to the delegates and world press contained all the lies associated with “climate change” and the failed policies he was pursuing two years ago and earlier.

“We come together here in Copenhagen because climate change poses a grave and growing danger to our people. You would not be here unless you—like me—were convinced that this danger is real. This is not fiction, this is science," said Obama.

Aside from the fact that the climate has always been in a state of change for Earth’s 4.5 billion years, the science employed to frighten people about such change does not bear any resemblance to real science which is an impartial blend of data based on replicable experiments.

Real science does not have a political agenda. The bogus science of global warming was revealed in November 2009 when the world learned that a handful of Intergovernmental Panel on Climate Change (IPCC) “scientists” had systematically distorted the scientific process, conjuring up false computer models that ignored significant elements of climate history. The revelations would be dubbed “Climategate.”

Never one to not criticize America, Obama reminded the delegates that America was “the world’s second largest emitter” of greenhouse gases even though such gases do not function as a greenhouse, trapping and holding heat. If they did, how would one explain the fact that the Earth has been in a natural cooling cycle since around 1998?

What is the mark of a developing or successful economy? It is the use of energy!

Obama promised that the U.S. would work “to phase out fossil fuel subsidies” and promised “historic investments in renewable energy” and his intention to put Americans “to work increasing efficiency in our homes and buildings; and by pursuing comprehensive legislation to transform to a clean energy economy.”

Such a transformation is ludicrous. America runs on oil, on coal, on natural gas, on hydroelectric and nuclear power. The investments in wind and, in particular, solar power, have wasted millions of taxpayer dollars. Combined, wind and solar provide less than two percent of the nation’s electrical power while coal provides nearly half. It has been the use of coal that the Obama administration’s Environmental Protection Agency has been determined to reduce or end, falsely claiming CO2 is a "pollutant."

Typically, Obama said “There is no time to waste.” In reality the Obama administration has wasted every opportunity to increase access to America’s vast energy reserves. Even when bragging about oil production, Obama never admits that it is occurring on private land. His administration has virtually shut down access to exploration and extraction on federally owned and managed land.

Environmentalism is the mask of communism, concentrating ownership of all property and productivity in the hands of the government. Even when addressing the need to ensure clean air and water, it has been used as a blunt instrument of power to limit economic development.

The Copenhagen conference came to a hasty end as the world’s leaders fled the city to avoid being trapped there by a massive blizzard. The global warming they all warned against in 2010 was not occurring and is not occurring.

What is your basis for declaring that the Earth has been cooling? I know it's not actual reporting, so which pundit told you this?

So does NOAA data:
http://www.drroyspencer.com/latest-global-temperatures/

I know it doesn't matter for you, since your generation has already plundered the planet and won't have to worry about consequences, but maybe you could spend just two minutes fact-checking your columns?

NOAA is a bit better, but Roy Spencer still leans toward the CO2 "forcing" theory about the climate and the vast majority of climatologists concluded long ago that CO2 simply reacts to climate change.

I hope this answers your questions. If you have more, visit ClimateDepot.com for lots of data.

49 former staff of NASA wrote that NASA's analysis of their data relies too heavily on flawed models. this group includes one meterologist, and is otherwise made up of astronauts, engineers, and program staff. While there's nothing wrong with astronauts or engineers, there is no reason to think they have any relevant expertise. But even if they did, their complaint is not with NASA's data on global temperatures, but with the organization's conclusions about anthropogenic global warming. So would this call into question NASA's graphs indicating that the Earth is not in a "cooling cycle" as you claim?

@Alexander. Okay, I will make this easier for you to understand. Do not comment here any further. I do not have time to address your conclusions and "facts."

@ Alan - people like Alexander Davis are the result of all the brainwashing and dumbing down of the population. They become intolerant of anyone expressing other views especially when they don't parrot theirs. No doubt he is also a liberal because liberals don't have the ability to think forward to the consequences of their actions. They miss the common sense gene. You'll find most Conservatives are also warming 'deniers' because we can think and see for ourselves and when it's pure BS then that's what we see. In comparison, Mr Davis is still trying to pick up the turd from the clean end.

Alan, you handled Alexander Davis correctly, in my view as an independent physicist-blogger determined to keep the focus upon the definitive facts. There are plenty of sites he can go to, to be de-brainwashed at his own pace, but he has obviously not availed himself of them, or he wouldn't be pushing the NASA site. He is clearly a young person (attacking "your generation") who has let himself be suborned--as have all of our authoritative institutions--by an incompetent climate "consensus", and the unthinking and confrontational, political "Insane Left". I expect you will say more about the latter throughout this week, as you intimated.

Thank you Harry and Lime. My general rule of thumb is to never argue with an idiot. They will drag you down to their level and beat you with experience!