The "What If" of John Edwards 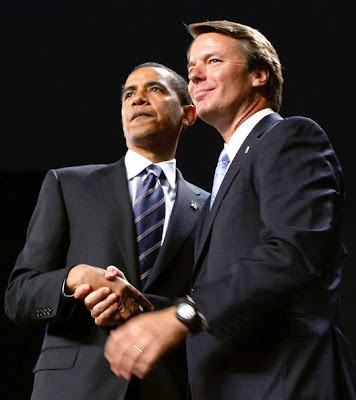 So much in life depends on the “what ifs.” When it comes to American politics, however, the outcomes can be disastrous. It’s a lesson that we need to address more often.

I got to thinking about this as the news of the John Edwards trial continues. For me, it’s not so much if he is found guilty or innocent. After the outcome of the O.J. Simpson trial and the more recent Casey Anthony trial, one becomes inured to miscarriages of justice. Worse off are the poor souls found guilty and serving years behind bars before being exonerated.

John Edwards, though, is emblematic of so much that is wrong with politics in America and a poster boy for why the profession of law is so frequently held in low esteem. Particularly troubling is the fact that he was chosen by John Kerry to be his running mate in the presidential campaign where, mercifully, George W. Bush defeated him in 2004.

Do we really need to be reminded that, were Kerry elected and if he were to have died in office, we would have had President John Edwards in office?

That’s why the trial about whether he misused campaign funds to cover up an affair with Rielle Hunter that led to the birth of a child (while his wife was dying from cancer) is of far less importance than the fact that America could have ended up with a President Edwards.

Let me remind you, too, that it was not the mainstream media that broke the story of Edward’s affair and love child. It was the tabloid, the National Enquirer.

To be candid, I have still not forgotten or forgiven Bill Clinton for debasing the office of President with a tawdry fling with an impressionable intern, Monica Lewinski. And, of course, he lied about it as long as he could. This flaw in his character still troubles me.

As for Kerry, the Senator from Massachusetts sets a whole new standard for stupidity and hypocrisy, but a previous Senator who made it to the Oval Office, John F. Kennedy was likely saved from ignominy by an assassin’s bullet. His philandering has been well documented and the media of his era covered for him.

Edwards strikes me as a particularly loathsome individual. If a jury sends him to jail it will merely be a paragraph in a future history book. Legal experts tend to think that he will be found not guilty of using campaign funds given the complexity of where they came from, whether they really were gifts, and other factors too arcane for me to fathom.

Consider the present situation. If Barack Obama should suffer a massive heart attack this nation and its destiny would be in the hands of Joe Biden, another fool worthy only of late night comedian’s jokes. But Biden is not a joke. He is the proverbial one heartbeat away from being the President of the United States.

Biden’s current status as campaign “attack dog” suits him well, He is capable of saying anything and mostly what he has to say is a tissue of lies. Putting aside Obama’s destruction of the nation’s economy, Biden is sufficient reason to vote for Mitt Romney and whoever he selects as his running mate.

As the pundits frequently tell us, elections have consequences. If Jimmy Carter had not turned out to be such an abysmal failure as President, we would not have had Ronald Reagan. That was Carter’s greatest legacy. Losing reelection was the best thing he did for the nation.

No matter what the jury decides about John Edwards, it will be a reminder of how close this nation came to having a man of dubious character hold a position that put him so close to the presidency.

It also says something about an America in which too many voters preferred a candidate like Edwards with good hair or Obama’s “cool” look.. Too many have either not learned or have forgotten the gravity of the choices we make when the high offices are at stake. The election is not a horse race or a beauty contest. It is often the life and death of our economy and of the men and women we send into battle.

In 2008 the media and a majority portion of the voters elected Barack Obama and we have had to endure someone who is arguably the worst President this nation has ever had. We have to avoid that occuring again. The fate of the nation depends on it.

There haven't really been very good options for a long time now.

There was a time, when politicians actually worked for the voters who elected, for moderate wages. House members did spend a lot of time in their house districts, listening to what the voters in their districts desired.

For too many years politicians gave been beholden to special interest groups, and have not cared in the least as to what voters actually wanted.

America has become too big for a Federal government to govern. It should be left to the various States to decide what its citizens want. The Federal government shouldn't be nearly as intrusive as it is today. However, me thinks the Fed will only get bigger and suck even more money and power out from the states as it races to be the head of the worm. It's taken so much money already creates more debt daily, when it is without the ability to create any wealth itself! And then tells everyone how to live, breath and think. I wonder what the Founding Fathers would think of the monster the US has become?

Disband the Democrat Party and arrest the leadership for treason, say I

Pray tell me, Sir, what think you, of the mounting evidence, forthcoming from such unimpeachable sources, as an Arizona , County Sheriff's investigation, of Obama/Soetoro's eligibility, or lack, there-of, to hold the office of the Presidency, concluding, that there is 'Probable Cause' to indicate, that Obama/Soetoro's B-certificate & Selective Service Registration card (at Least)are not only Fraudulent, but in the case of the Selective Service Registration, Felonious (and without which, No One is eligible to hold ANY Federal job)?

@Rocky. I think the only way to rid the US of Obama is to vote him out in November, a scant six months from now.

The entire power of the government, i.e. the Dept of Justice, would be marshalled to thwart any effort to bring him to justice on the issue of his ineligiblity to hold office and, curiously, the public seems disinterested.