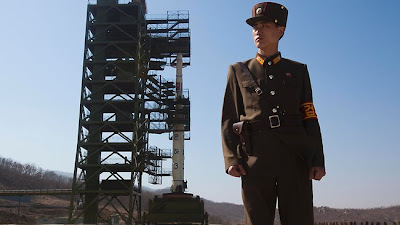 When North Korea launches its intercontinental ballistic missile called the Taepodong, Japan and/or the United States should shoot it down. News reports suggest it could occur as early as 6 PM, April 11.

Japan has more at stake being much closer to North Korea, but the United States has its reputation on the line. If it takes no action, the world will conclude it is gutless and its leadership position will be weakened. Shooting it down will not set off a war, but it will signal that America is not going to continue being played for a fool after years of having acceded to North Korea’s blackmail schemes.

The Taepodong is an ICPM and a very big risk to America’s west coast, to Hawaii, to Japan, and other targets. The first one was launched in 1998 so the North Koreans have had plenty of time to improve their technological mastery. The same, of course, can be said for their nuclear weapons.

In 2004, William C. Triplett II, a former chief Republican counsel to the Senate Foreign Relations Committee with more than thirty years of experience working on China’s threat national security, wrote a book, “Rogue State: How a Nuclear North Korea Threatens America.” I doubt anyone in the Obama administration has read it.

It is uncanny how a nation so poor that it cannot feed its own people—other than its million-plus military—can find the money to build ICBMs and develop nuclear bombs. That answer is staring everyone in the face. “Communist China serves as its life support system. Beijing will not let the regime in North Korea die,” wrote Triplett.

The Chinese have a term for it. It’s called “killing with a borrowed knife” and involves having another nation do its dirty work. “It is true that North Korea is the front man delivering the missiles to terrorist countries,” wrote Triplett, “But behind North Korea, the Chinese are enriching themselves by selling parts, service, production tools, training, and the development of future models.”

It’s worth noting that before the Chinese in the mid-1960s, it was the Russians—then known as the Soviet Union—that had helped North Korea establish a small five-megawatt nuclear research reactor at Yongbyon, sixty miles north of its capitol of Pyongyang. In time the Chinese would provide the assistance for a growing program. In the 1980s, the regime began to build three newer and larger nuclear power reactors.

It is ironic that, despite the capacity to produce electricity with nuclear power, North Korea remains in darkness when night falls.

The U.S. has shown a weak hand in dealing with North Korea. In the 1990s the Clinton administration engaged in classic appeasement, standing by for eight years while the North Korea-Chinese missile export joint venture moved ahead. No American administration going back to the days of Jimmy Carter has done much to restrain the North Koreans and the United Nations has an even worse track record.

There are eight known nuclear bomb explosion sites in North Korea. In 2003, it withdrew from the Nuclear Non-Proliferation Treaty, expelling the IAEA inspectors. In 2006, it tested a nuclear device and fired off six missiles, including a Taepodong II. Since 2007 the usual useless diplomatic kabuki dance has been conducted between North Korea, South Korea, China, Russia, Japan, and the U.S.

President Obama needs to “grow a set” and give the order that the missile is to be shot down when it is launched. Japan may do so for us. It would be a breach of U.N. Security Council resolutions. It is manifestly a threat to our national security.

If we did shoot it down what would China do? Nothing. It would issue a statement denouncing the action and then it would be back to business as usual. It would, however, send a message to them and the North Koreans that the U.S. is not a paper tiger.

If the Obama administration takes no action regarding the missile, it will no doubt find an excuse to ship 240,000 tons of food aid for “humanitarian” reasons. It’s been done before. It didn’t change or slow down North Korea’s missile and nuclear program. It just gave them more time to perfect it.

Shoot it down indeed!

Obama is, as Texans would say, "all hat and no cattle", and it seems to be, to make Japan do the "heavy lifting" on this one.

With the Gay Chupacabra in the WH, NK is 100% counting on no nads in America.