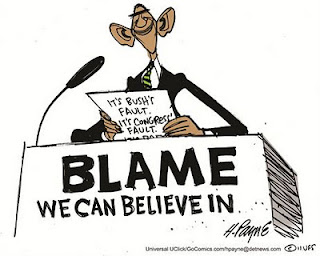 We teach children to acknowledge and accept blame when they do something wrong. It is an important and useful trait in life. Those who do not learn this remain emotionally stunted children their entire life. I am, of course, speaking of President Barack Hussein Obama and I shudder to think of the continued damage he can do to the nation during his remaining months in office.

As Fox News’ Doug McKelway wrote in August 2011, “Obama has suggested that blame for the stagnant U.S. economy lies in places other than the Oval office. The latest example occurred Monday when the President said, “There will always be economic factors that we can’t control, earthquakes, spikes in oil prices, slowdowns in other parts of the world.”

The greatest slowdown has been at home, the national economy, is the only one of concern to Americans. Three and a half years into his first (and hopefully last term), Obama is still blaming it on former President Bush.

As recently as April 18, Obama returned to his favorite theme. Urging a tax increase on millionaires, Obama said that tax cuts enacted “eight years before I took office” had contributed to a “global economic crisis.”

It is worth recalling the financial crisis occurred in September 2008 in the final months of Bush’s second term.

George W. Bush's economic policies set a record of 52 straight months of job growth. So, Obama is not only trying to distract voters from the actual facts, but lying about them as well.

In point of fact the Democrats had taken control of Congress on January 3, 2007, at the start of the 110th Congress

In December 2011, Investors Business Daily opined that Obama was “no longer content to blame President Bush for the country’s economic ills” but was accusing “his Democratic predecessor of being a co-conspirator.” That would be former President Clinton!

In a “Sixty Minutes” segment, Obama had said the economy was suffering from “structural problems that have been building up for two decades.” Most observers concede that both Clinton and Bush43 did a good job in guiding the economy during their terms, but not Obama.

The segment also included his prediction that “If I don’t have this done in three years, then there’s going to be a one-term proposition.” The likelihood that Obama can be reelected with 8.6% unemployment, $4 gas at the pump, massive housing loan foreclosures, and a still stagnant economy grows smaller by the week.

Consider the many ways this President has found everyone else to blame for his failures. Oil prices were blamed on the “uncertainty about what’s going on in Iran and the Middle East”, but prices stayed moderate during all the years of conflict in Afghanistan and Iraq.

Despite the horrid waste of taxpayer’s money on the various green energy firms that keep failing, Obama blamed the Solyndra debacle on the Chinese who “were subsidizing their solar industry and flooding the market in ways that Solyndra couldn’t compete.” That was well known before the Solyndra half billion dollar loan guarantee was made, followed by still more to other solar companies.

The key word here is “inherited.”

Of course it was inherited and Obama knew that as he campaigned to be the President who would solve the financial crisis. In February 2010 he said “If we had taken office during ordinary times, we would have started bringing down these deficits immediately.” Instead, his stimulus program tripled the national deficit in his first year in office

Regarding the debt, Obama in March 2011 said, “I inherited a big debt.”

The message, repeated ceaselessly, is that the increase is not his fault.

No matter what the problem is, it is NEVER his fault.. This isn’t just habitual. It’s pathological. And it bodes ill if he is reelected.