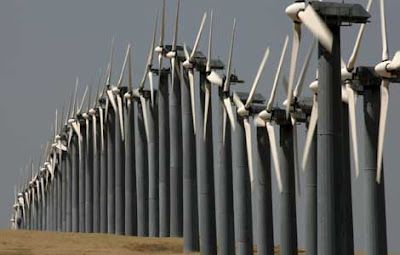 
Like so much else that involves the absurd “renewable energy” scam—wind, solar power and ethanol—the public remains largely in the dark about its actual costs. They come straight out of their pockets in the form of higher costs for electricity and, in the cast of ethanol, lost mileage and engine damage.


At the end of this year, unless Congress does something spectacularly stupid—always a possibility—the Wind Production Tax Credit (PTC) will expire. If extended for just one more year, it will cost $12 billion. If wind energy was (1) reliable and (2) economical, one could make a case for it, but it is the very opposite.


Another way the wind industry has stayed in business, but not in the competitive sense of other industries, has been renewable energy mandates that require state utilities to purchase wind powered electricity generation. Many states have opted out of such mandates as they realized the cost to consumers.


The wind industry in America, according to Pyle, has cost taxpayers $20 billion over the past two decades “and, today, the PTC is so lavish that wind producers are actually paying the electricity grid to take their power, just so they can collect more taxpayer money.”


All the economic advances America has made have been the result of the discovery and utilization of energy generation from oil, natural gas, and coal. If you want to harm America in the most fundamental way, you would attack these sources of energy and that is exactly what the Obama administration has been doing since it took power. For decades coal represented fifty percent of all the electricity used, but incessant attacks by the Environmental Protection Agency, using clean air regulations, has reduced this significantly.


The reality is that 94% of all electricity generated in America comes from traditional sources, coal, natural gas, nuclear and hydroelectric power. America is home to century’s worth of inexpensive coal, is the largest producer of natural gas, and invented nuclear power.


The absolute least sensible way to generate electricity is wind power, followed closely by solar power. Since the wind does not blow all the time or with sufficient ability to turn the blades of the huge turbines, it would seem obvious that wind is a moronic way to produce electricity, but that has not kept those reaping taxpayer tax credits and benefitting from mandates for its use from lining their pockets.


It is a curiosity of the debate over wind power that its impact on bird and bat species is rarely, if ever, discussed or reported. In a recent article, Paul Driessen noted that “The impact of mandated, subsidized and ‘production tax credited’ industrial wind facilities on eagles, whooping cranes, bads, and other value species is horrendous, ecologically devastating, intolerable—and growing. In fact, it is infinitely worse than the widely quoted figure of 440,000 birds per year…the actual USA death toll is 13,000,000 to 39,000,000 birds and bats every year!”


The expert I turn to for information about wind power is John Droz, Jr., a physicist and a leading activist against its use whose website is worth visiting.


Wind power doesn’t meet any of the major criteria for the generation of electricity. Droz points out that it only produces about 30% of the power it allegedly can or should produce. This is because “it takes over one thousand times the amount of land for wind power” that a single nuclear power plant produces. Moreover, that land has to be located far from the cities and suburbs that need to access its power.


Is wind power reliable or even predictable? Compared to traditional power generators, it doesn’t come close compared to the standards set for them. Indeed, “when power is really needed,” notes Droz, such as hot summer afternoons, “wind is usually on vacation.” It most certainly cannot be depended upon to dispatch power to the grid on demand, nor can it supply power reliably to meet a 24/7 demand.


Along with the Wind Protection Tax Credit, the industry is subsidized far more than any conventional power source, Cost per megawatt-hour, according to the U.S. Energy Information Agency, is subsidized to the tune of $23 per megawatt-hour. Compare that with coal that receives 44 cents! Natural gas at 25 cents! Hydroelectric at 67 cents, and nuclear power at $1.59.


The advocates of wind power are the same charlatans who keep shouting about carbon dioxide (CO2) as the cause of global warming—and now “climate change—when CO2 plays no role whatever in causing or changing the climate. It is also touted as being environmentally beneficial, but tell that to the thousands of bird and bat species the wind turbines kill every year.


Allowing the PTC to expire at the end of the year will not mark the end of wind power, but it will surely make it even less competitive in the years ahead and, like other nations that bought into this fairy tale, those dependent on it are going to suffer some dire consequences, particularly as the current cooling cycle the Earth has been in for the last sixteen years deepens.

If wind power is such a good deal why don't we build a butt-load of wind farms in Washington DC?

There's so much HOT AIR coming from DC these things would spin so fast that the bearings would burn out...