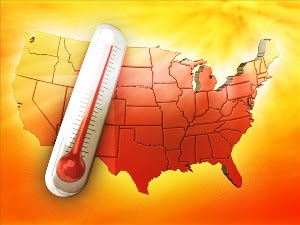 
I am giving thanks this week, despite the heat wave, that I have not read, nor heard, a single claim that it is proof that global warming has arrived and we are all doomed.
By the time the global warming hoax was in its final days, we were being told that mid-winter blizzards were signs of it. Now the charlatans have switched their message, calling it “climate change” and this is so bogus that it defies description.


Of course the climate changes! It has done that from the billions of years before the first man climbed down out of the tree to stand upright; just in time to learn how to run like hell from whatever creature thought he would make a tasty snack.


I live in the Northeast and residents in the tri-state area face an entire week of temperatures in the upper 90s. The National Weather Service predicts the heat index (what it feels like outside) could hit 105 degrees. In 2006, about forty people died from heat stroke in New York during a heat wave from late July to early August. Most lacked air conditioning.


Curiously, the Earth is actually the farthest away from the Sun during our summer months. The way the National Geographic explained it the “Earth's elliptical orbit means there will be a point each year when the planet is closest to the sun, called perihelion, and a point when it is farthest away, known as aphelion.” The aphelion was reached on July 5.


By contrast in January of this year Australia was undergoing a historic heat wave complete with wildfires in five of its six states. It set new records hitting 104.6 degrees Fahrenheit; summer in Australia runs from December to February. Far to the north, however, this summer has been the coldest on record in the Arctic and it is forecast to get even colder there towards the end of the month.


What I always find interesting is the way much of the population seems to have absolutely no memory of any previous heat wave or, for that matter, a major blizzard. Either way the news media goes bananas, usually seeing it an apocalyptic scenario. No, it’s just a perfectly normal heat wave or blizzard.


It’s a good idea to keep in mind these and other events are the “weather”, not the “climate.” The climate is measured in terms of centuries or, at the very least, decades. The climate is a trend. The weather is what’s happening outside today.


These weather extremes can be quite dramatic. Wikipedia notes that by 1851, half the population of England was living in towns while London had already grown into a major city. “Modern toilets appear on the scene before modern infrastructure, turning the Thames into an open sewer. In June 1858, a heat wave hit London and baked the river into a fetid mess.” A newspaper reported that “Gentility of speech is at an end—it stinks; and whoso once inhales the stink can never forget it and count himself lucky if he lives to remember it.” The result was that Parliament moved upstream and anyone who could afford it left town.


In June 1976, England sweltered for fifteen straight days of heat in the ninety degrees and parts of the southwest went without rain for forty-five days. Forest fires destroyed trees and crops.


In August 1948 in the northeast, New York, Philadelphia, and other cities saw the temperature hit a hundred degrees and people flocked to air-conditioned movie theatres or to the airy beaches like Coney Island. I am old enough to recall the pre-air conditioned times before they became a common appliance in people’s homes and apartments. Electric fans provided what little relief there was to be found.


You don’t have to live in a city to endure a heat wave. During the Great Depression the 1936 heat wave that hit the Midwest turned farms into dust bowls and farmers lost their summer crops. It is estimated that some 5,000 people died. Chicago was hard hit and as far north as Toronto. The scene was repeated in 1995 in Chicago when an estimated 500 people died from heat-related deaths.


By the end of the week, Al Gore is sure to issue another one of his boring claims that the current heat wave is “proof” of global warming. Ignore him.

I don't know about global WARMING but yesterday it was 72° here in Rowlett, just outside of Dallas, TX.

We had RAIN all day yesterday, most of the night last night and off and on today. Our yards are GREEN again.

Now I'm not operating under any misconceptions, August will be HOT, the last part of July will be hot, but it's TEXAS, and it's summer, it's supposed to be HOT!

If we are at the door of a mini ice age and global temperatures are dropping consistently over the past two decades, how is it that we continue to have record temperatures? It doesn't make sense.

Flee, climate cycles are measured in decades and centuries, so we may have hot weather in the midst of an overall cooling cycle.