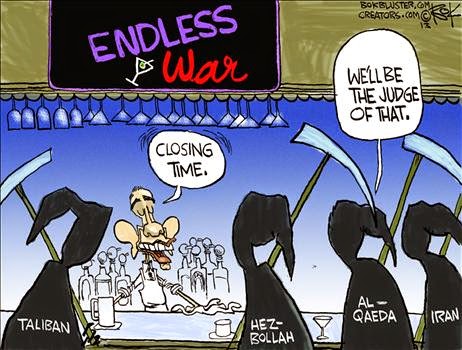 
I remember how the Vietnam War seemed to drag on for years without resolution, from Lyndon Johnson’s initial expansion in 1964, after he was elected in his own right through his second term, marked by many marches in Washington, D.C. demanding the U.S. get out. It took Nixon’s and Kissinger’s efforts to secure an end to the conflict in 1973.


The war in Iraq had a similar feel to it. The first conflict, led by Bush41 to push Iraq out of Kuwait had public support and was dramatically short and successful. The second, led by Bush43 began as an effort to remove Saddam Hussein from power and initially the military victory was also swift. In hindsight, the error was staying on, presumably to help establish a democratic government and other institutions in a nation that had never known democracy.


The Iraqis are divided by Islam’s ancient schism, Sunni versus Shiite. Saddam had been a Sunni. He was replaced by a Shiite, Nouri al-Maliki, elected Prime Minister in a nation that is predominantly Shiite.


While Republicans would like to blame the current situation on Obama, the fact is that George W. Bush signed a “Status of Forces Agreement” in 2008 that terminated the American military presence in Iraq at the close of 2011. That said, President Obama shares the blame for the current situation for failing to push for a military presence there. His foreign policy in the Middle East has been to get the U.S. out of Iraq and out of Afghanistan.


This did not go unnoticed by Iran, al-Qaeda, or the breakaway faction, the Islamic State in Iraq and al-Sham (ISIS) which regrouped in Syria as part of the forces seeking to oust the regime of Bashar Assad, its dictator. They took the time to recruit the most fanatical Islamists into their ranks, train them as an army, and, having established a command center in Syria, to then unleash them on Iraq.


While this was going on President Obama never failed to tell Americans that bin Laden was dead and al Qaeda was on a “path to defeat.”  In a 2013 speech at the National Defense University, he asserted that “the future of terrorism” came from “less capable” terrorist groups that mainly threatened “diplomatic facilities and businesses abroad.”


He not only learned nothing from the 2012 attack in Benghazi, Libya that killed our ambassador and three others, he and his Secretary of State, Hillary Clinton, engaged in a lie about it being a spontaneous event triggered by a video no one had seen.


Obama concluded his remarks by calling on Congress to repeal its 2001 Authorization to Use Military Force against al Qaeda!


As the June 12 Wall Street Journal editorial, “The Iraq Debacle”, noted, “If the war on terror was over, ISIS did not get the message.”


Obama’s decision not to intervene in Syria after it became known Assad was using poison gas was not just his own reluctance to engage militarily in the Middle East, but reflected the widespread American lack of support for further involvement in the region. Too many years in Afghanistan and Iraq, along with the vast costs and loss of American lives was and is a significant factor.


Coinciding with this has been Obama’s view that America is not exceptional, nor that it should continue its role as the leader of the free world. In this regard he is spectacularly wrong. Much of what passes for stability among the nations of the world is influenced by the military power (and the willingness to use it) of the United States—at least until Obama was elected.


His release of five Taliban commanders from Guantanamo Bay reflects his longtime intention to close the site which he deems a “provocation” to Islamic terrorism. They do not need provocation. They are holy warriors, jihadists.


They attacked the homeland when there was no Guantanamo and there had been attacks on our embassies going back to the 1980s. Former Secretary of State Hillary Clinton dismissed them as no danger to the U.S. One of them was involved in the planning of 9/11 and two are designated by the United Nations as war criminals. Clinton is as delusional as Obama.


Meanwhile, Iraq was ripe for a Sunni-Shiite civil war after the removal of Saddam Hussein. Prime Minister al-Maliki, ruling in autocratic manner, removed many Sunni generals who had fought alongside of American forces and increased the Shiite-Sunni divide in his government. The loss of major cities in the north to ISIS, a Sunni entity, has brought Shiite Iran into the present conflict potentially to protect southern Iraq and its own interests because ISIS exists to create an Islamic caliphate to control the entire Middle East.


ISIS is so radical, so devoted to the most draconian and barbaric aspects of Islam, that it is filling the streets of captured cities with the beheaded bodies of all they deem a threat to their ideology.


The notion that al Qaeda and comparable groups were on the run was either a delusion Obama held onto or a deliberate lie. ISIS is just one among others that include the Taliban in Afghanistan, Al-Shabaab in Somalia, Al-Nusra Front in Syria, Ansar Dine in Mali, and Boko Haram in Nigeria.


Daniel Pipes, president of the Middle East Forum, believes that “however much damage the al Qaeda-type organizations can do to property and lives, they ultimately cannot emerge victorious because their undiluted extremism both alienates Muslims and scares non-Muslims.” That is a long term prediction, but it is the short-term conflict that must be addressed and Dr. Pipes deems what is occurring “a Middle Eastern problem and outside powers should aim to protect their own interests, not solve the Middle East’s crisis. Tehran, not we, should fight ISIS.” 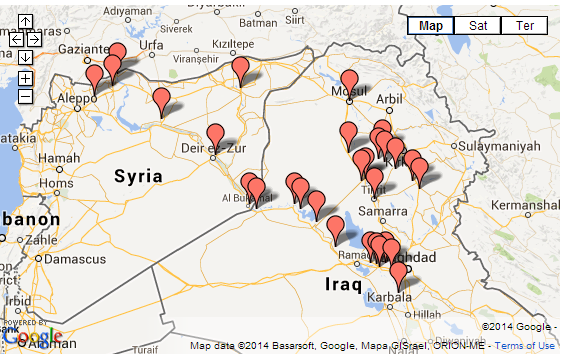 Obama will likely follow Dr. Pipe’s recommendation, leaving the fighting to the Iraqis and whatever aid Iran provides. The hope is that Iraqi forces can regroup to protect Baghdad and push out ISIS or restrict it to the northern section of Iraq. The war may ultimately see Iraq split into sections, one of which will be a separate and sovereign Kurdish one. ISIS, if the Iranians decide to rid the region of them, could face defeat. It would solve their threat to both Syria and Iraq.


Ultimately, this isn’t just a Middle East problem. It is a U.S. and global problem because (1) Islamism is a threat to modern civilization and (2) because two of the largest fields of oil in the Middle East exist in Iraq, the other two are in Saudi Arabia and a fifth is in Kuwait. If Iraq falls, the price of gasoline and all other petroleum products would skyrocket.


After six years of the Obama administration, the U.S. has no friends in the Middle East—the kind that trust us, but it does have interests to protect. It has an enemy in fanatical Islamism. For now, however, it will not put U.S. troops into the Iraqi conflict and that reflects not just Obama’s point of view, but that of most Americans.

Mr. Caruba, an insightful and well written critique of the situation. But too, I think it would have been better to emphasize the political climate each President faced with each phase of the Iraq War/s.

41, being a UN, new world order guy, threw the US at the tip of the sword of international condemnation of Saddam and his Kuwait adventure.

43, much like 41, pushed the US to the tip of the UN sword once again, as there was great international pressure to do something or see the UN mean nothing. He truly believed in the sanctity of the UN resolutions Iraq was foiling and then after 9/11, he had extra reason to act.

The UN and those that fully embrace it are at the root of middling in the M.E. Obama is more of a realist, he likes the UN if it serves his purpose, but refuses to be the tip of the sword... because he'd rather see America diminished first and foremost.

Iran now has troops on the ground in Iraq. ISIS will see this (rightly) as in invasion as will Saudi Arabia. The Iraqis themselves have sided with ISIS against the Government. Don't write off ISIS just yet and don't imagine that Iran has nothing to fear.
Iran has not fought a modern war.
Iran has no money but it does have a population that want's to be rid of it's Government.

Ys, Eddy, this is really, really scary. Scarier still is that some 47% of Americans still support Obama.