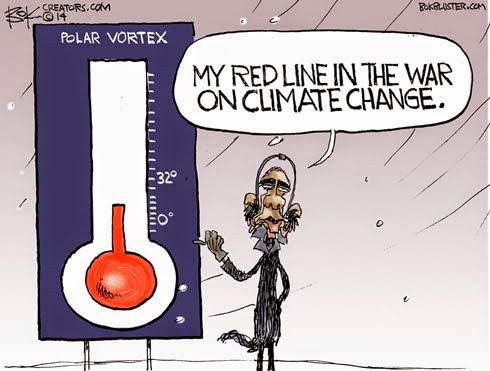 
It is depressing beyond words that we will have to endure two and a half more years of an endless stream of lies about climate change from President Obama.


On June 14 he gave a commencement speech to graduates of the University of California at Irvine, using it to tell Big Fat Lies, not the least of which was that the Earth’s temperatures were rising when in fact they have been falling for nearly eighteen years.


It is an endless source of wonder to me that no part of the mainstream media disputes him when he says things like this. For years now they have been reporting the evidence of increasingly cold weather worldwide.
On the same day the President was lying about warming, eight inches of snow fell in Rize, Turkey. It has fallen as well in South Africa, Norway, Sweden, Finland and Russia while closer to home snow fell on several cities in Idaho with cold freezes extending into Oregon. In June!


Obama used the speech to demand that politicians take steps to acknowledge climate change which used to be called global warming until it became undeniable to everyone except the charlatans lining their pockets with utterly bogus “research” that underwrites the source of the lies, the United Nations Intergovernmental Panel on Climate Change (IPCC).


Obama continues to listen to his White House advisor, Dr. John Holdren, whose contempt for the human race is such he would happily see large parts of it disappear. In February, Holdren told reporters that all weather is impacted by climate change, but that is what climate change has done for 4.5 billion years. Not mentioned was that climate cycles are measured in centuries while weather is a short-term event. The most recent mini-ice age lasted from 1300 to 1850.


Holdren alluded to droughts affecting parts of the nation, claiming they were getting longer and drying. Two leading climate scientists, former NASA scientist Dr. Roy Spencer and University of Colorado climate scientists, Roger Pielke, Jr, called Holdren’s assertions “pseudo-science rambling.” “The idea that any of the weather we are seeing is in any significant way due to humanity’s greenhouse gas emissions verges on irrationality,” said Spencer. Pielke called Holdren’s assertions “zombie science.”


While Holdren is warning about droughts that could cause famines, James M. Taylor, the managing editor of the Heartland Institute’s monthly, Environment & Climate News, took aim at the IPCC claims, noting that U.S. and global crop production, especially the most important staple food crops, corn, rice, and wheat, “have more than tripled since 1970. During the past few years, the United States has set crop production records for alfalfa, cotton, beans, sugar beets, sweet potatoes, canola, corn, flaxseed, hops, rice sorghum, soybeans, sunflowers, peanuts and wheat, to name just a few.”


The worst part of Obama’s lies about the so-called “greenhouse gases” that we’ve been told for decades are warming the Earth is the way those lies are translated into government policies. The Obama administration, via the Environmental Protection Agency, has launched a war on coal-fired plants that produce 40% of the nation’s electricity claiming that their emissions such as carbon dioxide (CO2) are causing a warming that is not happening. What is happening is a deliberate effort to drive up the cost of electricity for everyone.


America runs on electricity and 68% of it is generated by fossil fuels, 20% by nuclear, and 7% by hydropower. So called “clean energy”, wind and solar, provides about 4% at far higher costs than the others and exists largely due to government subsidies and mandates.


Claims about increased severe storms, heat waves, and hurricanes simply have no basis in fact. In recent years there has been a record low in the numbers of tornadoes, hurricanes, no change in the rise of sea levels, but record gains in Arctic and Antarctic ice. None of this is reported by the mainstream media.


Yet Obama told graduates that rising temperatures and sea levels, as well as intensifying storm patterns represent “one of the most significant long-term challenges that our country and our planet face.” He said this even though his administration’s recent National Climate Assessment acknowledged that “There has been no universal trend in the overall extent of drought across the continental U.S. since 1900.” The report, however, is being used to justify carbon-related regulations.


While the world’s attention is on one of the greatest threats facing it, the takeover of northern Iraq by a barbaric Islamist group—one from which even al Qaeda disassociated itself—Obama is talking about non-existent climate threats to further policies that kill jobs in the U.S. and harm its struggling recovery of our economy.


While the Islamic State of Iraq and al-Sham (ISIS) seeks to expand its control of a major portion of the Middle East, Obama thought it was more important to lie about the climate to college graduates.


How much more damage Obama can inflict on the economy between now and the end of his second term in office is unknown, but what we do know is that his priorities, based on scare-mongering speeches about the climate will continue until he leaves office.

Obama is a third-world dictator and tribal leader, not fit to hold any office in America. He demonstrates every day that he is bent on bringing down America and that nothing he says should be taken seriously, much less trusted in.

He will probably remain in office until his term ends. There seems no intent to remove him via impeachment. After the midterms, maybe, but unlikely.

Obama is what I like to call *A Moron*... Apologies to all morons for lumping you in with Obama...

At home in the USA he's a giant slayer, because he has NO equal. He plays with his non-existent RINO opposition as a cat would play with a mouse. He's is literally getting away with murder while the RINO establishment navel gazes and says NOTHING about his antics. At the moment he's flooding the country with hostile illegal immigrants - for YOU to care and look after, while they have no loyalty to their new welcoming homeland but will vote one day for the Dems - and the RINO's do zero, nada, nothing about it. One can either deduce that the GOP is led by idiots, or they're complicit in Obama's agenda.

It's only when Obama leaves the safe American shores that the truth is exposed - that he's a retarded Progressive, who doesn't know what he's doing, and where people laugh at him behind his back. He tends to stay where it's safe - in dumbed down America, where he has the media and education institutions wrapped tightly around his little black finger, covering for him 100%. There is no media in America - they're part of the fifth column. The media's job is to vet the government, not carry water for it.

So, good luck America. You still have 2.5 years of this traitor to deal with. Rome burns while Nero fiddles. One has to wonder what America, and indeed the world will look like when he's finished imposing his Progressive ideology on it.