Will the Midterm Elections Repeat History? 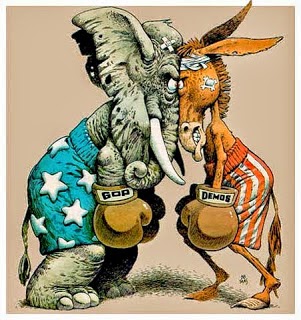 By Alan Caruba
﻿
As Americans go to the polls in primary elections to select the candidates that will run in November, the question is how many Tea Party candidates will be among the winners. If there are a significant number among them, my feeling is that the November midterm elections are going to be a bloodbath for the Democratic Party.


There is a point at which even Democrats realize that their President, their party and their policies are harming the economy in general and themselves in particular. Very few families in America do not have someone who is out of work because of what Obama has done at this point. What he has not done is put the economy on the road to recovery.


Ultimately all elections are about jobs and the economy. With 90 million Americans out of work or who have just stopped looking for work, that’s a lot of unhappy voters. Elections tend to work in cycles. When times are good, politicians take credit for it and get reelected. When times are bad they blame the other party and are often rejected.


As we approach the November midterm elections the Obama administration’s political strategy has been to offer an increase in the minimum wage, to talk about equal pay and infrastructure, and to claim that the Affordable Care Act is working.


Raising the minimum wage will reduce new jobs because, at some point, a business needs to make a profit, but If they don’t pay enough, no one will work for them. For all the complaints about Wal-Mark and McDonald’s, these and other corporations employ thousands. Workers at a Toyota manufacturing facility were given the choice of joining the auto workers union and they rejected it.


A nation that has $17 trillion debt Is in no position to talk about spending billions on infrastructure. And the Affordable Care Act—Obamacare—has proven to be an unmitigated disaster for millions who were insured, lost their insurance, and then required to purchase plans they did not like and which cost more.


So, yes, voters, Democratic and Republican, are ready to reject incumbents in Congress seeking reelection if they voted for Obamacare and are giving evidence of liking candidates who express Tea Party movement ideals. And let’s not ignore the growing role of independent voters who are deciding the outcome of elections.


There is, moreover, a vast, often unspoken, dissatisfaction with President Obama for a variety of reasons. Chief among them is the realization that he lies about everything. Second term Presidents have received so much public exposure that it is human nature to grow tired of them. This aversion, in Obama’s case, is heightened by a long succession of scandals, the latest of which is the failure of the Veterans Administration to provide the services and care expected.


When you add the gun-running fiasco of “Fast and Furious”, the first scandal to erupt and those that followed, voters are less inclined to be forgiving. The 2010 midterm elections increased the Republican control of the House of Representatives. The 2014 elections are likely to cede control of the Senate to the GOP. The Republican Party will have a relatively short window of time to take dramatic action such as the repeal of Obamacare to make its mark before 2016.


Rarely mentioned by political pundits is the rot which the Obama administration has engendered throughout the whole of the federal government. The spending by various elements of it has demonstrated an indifference to the massive debt run up by failed programs such as the stimulus, the crony capitalism billions wasted on green energy companies—wind, solar, biofuels, and batteries—that taxpayers ended up losing.


Another unspoken element of the Obama message to voters is its obscene emphasis on “climate change” as the all-purpose cause of weather-related events that have always existed. This is exacerbated by the Secretary of State’s claim that climate change is an even greater threat to the nation than Islamic terrorism or actions being taken by Russia, China and Iran, among others. The climate change message is intended to distract voters from the economy and issues based in reality. Climate change barely registers as a concern among voters.


The President’s lavish lifestyle that has included hugely expensive family vacations, lots of golf, and his non-stop fundraising, particularly among the “one percent” wealthy, has not gone unnoticed by voters. The role of the First Lady plays into this as she promotes nutritional programs that have not found favor, particularly in the nation’s schools.


Nor have voters found the issue of race which seems to dominate the Attorney General’s views and actions to correlate with reality. Fifty years past the Civil Rights Act of 1964 has demonstrated considerable improvement in the lives of black Americans. Talking about school segregation as the Attorney General recently did seems oddly out of place to many voters who are far more concerned about the general deterioration of the nation’s education system that has led to a call for more and more charter schools.


We have a President who has endorsed both same-sex marriage and the legalization of marijuana, neither of which appeals to the vast majority of Americans. His open rejection of the Defense of Marriage Act is contrary to the oath he took to enforce all laws. His use of executive orders to alter Obamacare’s implementation for purely political reasons raises more questions about his indifference to the oath he took.


The swap of five high-ranked Taliban detainees for a U.S. soldier who reportedly deserted his post in Afghanistan is just the icing on the cake this primary day.


The voters have many reasons in November to express their dissatisfaction with Obama and the Democratic Party. They did so in 2010 and despite Obama’s reelection in 2012 they appear ready to do so again in November of 2014.

I expect the elections in November to favor Tea Party style politicians, but I doubt even firm control of Congress by the opposition will stop Obama's long march to tyranny.

In fact, I expect Obama to "double down" on anything and everything that can be done by Presidential Orders to destroy the Republic.

After all, Obama is a traitor and he is doing his traitor's duty, which is to destroy liberty in America, so I would expect his last act as president will be to tank the economy worse than 2008 and bring on the Super Depression that he hopes will be the last straw on to break the camel's back.

'Ultimately all elections are about jobs and the economy.'

If that was the case, we would be living in a perfect capitalistic society. But it is not and so we are not.

Elections ultimately are about ideology. Until conservatives realize that, they will continue to lose ground (albeit gradually).