Predicting the Weather? The Climate? You're Kidding, Right? 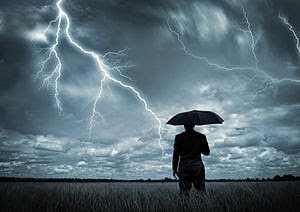 
With some of the most sophisticated computers and satellites at its disposal, the U.S. Weather Service cannot tell you with any certainty what the weather will be in your area two weeks from now. It’s not that they don’t give forecasts beyond that a good try, but when you have to work with computers that cannot determine cloud formation and cover, significant factors, you have to just make your best guess.


Since the 1980s, following a decade in which an ice age was being predicted, the global warming charlatans operating out of the United Nations Intergovernmental Panel on Climate Change began to generate predictions of an imminent and threatening period of warming for the Earth and, of course, former Vice President Al Gore became the Predictor-in-Chief for that while also becoming a multi-millionaire doing so.


Then, about seventeen years ago, the Earth began to cool, entering a perfectly natural weather cycle that put an end to the global warming hoax. So the IPCC and the rest of the environmental crowd began to talk about “climate change” instead.


They continued to blame carbon dioxide (CO2)—which they call “carbon pollution”—and the Environmental Protection Agency keeps flogging this lie because it is the basis for its criminal agenda to destroy the economy with hundreds of thousands of regulations over every inch of land and every drop of water in the nation. This week it embarks on its effort to shut down every coal-fired plant in America that provides electricity.


Writing recently in his “blogosphere” at IceCap.us, Joe D’Aleo, a widely respected climatologist, pointed out that “First of all, carbon pollution is ‘soot’ which we don’t have a problem with—the EPA’s own data shows in fact it is well below EPA standards, declining 50% since 1999”


“CO2 which is conflated with soot is a harmless (actually beneficial) gas and every breathe (that) every human emits (contains) 100 times as much CO2 as is in the ambient air. CO2 is critical for plant life and we are at the low end of the scale of CO2 for the earth’s history, just above the survival level needed for plants which require it for photosynthesis—around 280 parts per million.”


So, who are you going to believe? A leading climatologist or a former community organizer, Barack Obama?
It appears that Obama has decided to tell a lot of lies about the climate for the remainder of his second term in office. Having failed to resuscitate the nation’s economy and unable to have any effect on global events as his administration’s scandals mount, Obama has seized upon the IPCC’s lies about the climate to divert our attention from our real problems. They have become the basis for official U.S. policy and behavior.


As the hurricane season from June through November begins, Obama can be found predicting a rise in these storms in the months ahead, but as June arrived, it marked 3,142 days since the U.S. last was hit by a major hurricane. This “drought” of hurricanes is truly unprecedented, dating back to 1900!


Be assured that Obama will be supported by reports from U.S. agencies like the National Oceanic and Atmospheric Administration and National Hurricane Center whose budgets depend on his support. What they won’t tell you is that, thirty years ago, Dr. William Gray, a distinguished meteorologist at Colorado State University found and documented the relationship between the El Nino Southern Oscillation (ENSO), commonly just called El Nino that suppresses hurricane activity.


Forecasters are anticipating a strong El Nino this year. It is a phenomenon determined by the ocean and atmosphere in and over the tropical Pacific Ocean. How powerful is it? Its effects are felt around the world, including the Atlantic Ocean where most of the hurricanes that hit the U.S. occur. Its counterpart, La Nina, a cool phase enhances hurricane activity, but that is not going to happen in the months ahead because El Ninos usually last at least 27 months.


If the U.S. Weather Service cannot predict the weather two weeks to a month from now, any predictions regarding the climate—measured in centuries—should be viewed with a very high degree of doubt. It should be noted, however, that the interglacial period between ice ages is about 11,000 to 11,500 years and the current period is reaching its end.


A President using the weather to scare Americans should be viewed with considerable cynicism. Note that Obama keeps referring to the last big storm to hit the East Coast, Sandy, but it was a tropical storm, not a hurricane

The National Center for Public Policy Research has set forth the "Top Ten Reasons Washington Should Not Impose New Global Warming Laws or Regulations."


There will be dramatic weather events in the months ahead because there are always such events, droughts, storms, tornadoes, floods, forest fires, et cetera. This is how Mother Earth operates and always has.


It comes down to this. If your weatherman tells you it is going to rain tomorrow or in a day or two, bring an umbrella with you. Beyond that, just enjoy the summer.

Well said, Alan - If we can't predict the weather with 100% certainty 24 hours in advance, then how the HELL can anyone predict the coming of Global Warming, or the next Ice Age?

Like with "The Shape of Things To Come" there are too many variables in the equation.

Telling the future is a game of chance. You can guess right or wrong. But when there are facts to support otherwise I lean towards the facts. Fact #1 weather and climate are two different things. Weather is short term and therefore extremely unpredictable after two days. Climate is the change over the various years. So when you say there are no facts to support the global warming of the world I have to say look towards historical occurrences as your answer if you need any more help NASA keeps a record of the weather since 1880s. Each year the temperature rises slowly and if you think slow is okay for the world then understand that almost every scientist in the world estimates that a 2 degree change can wipe us out. So I say write about something that you may actually get liked for. Start telling people to stop using fossil fuels and look to a solar and wind. Just a thought.

@Peace. I did NOT say there was no global warming. I said that the claims made by the IPCC were wrong and those now making those claims in the name of climate change are just as wrong. Yes, there was a period of warming from about 1850 on. For the past 17 years, however, the Earth has been in a cooling cycle.

As a resident of Hurricane Alley for over half a century, I have witnessed some pretty severe storms.

However, even tho, I relish the good news that we are expected to have a mild hurricane season, one must remember that "mild" is open to interpretation. There are far too many variables about a hurricane to pigeon hole them as we humans try to do.

Already, we are preparing for the new season. We're stocking up on emergency supplies, checking the condition of those supplies that last for many years, and planning our best westerly route out of the area when our options are down to one -- "RUN!"

Alan is correct in this article.

Do yourself a favor and pay a visit to your local Weather Service Office and ask for a tour. It is a real eye-opener.