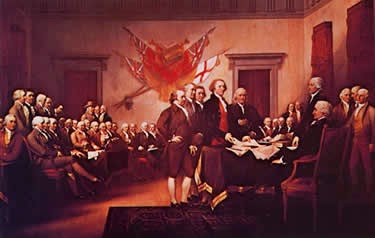 
“I cannot undertake to lay my finger on that article of the Constitution which granted a right to Congress of expending, on objects of benevolence, the money of their constituents. … If Congress can do whatever in their discretion can be done by money, and will promote the General Welfare, the Government is no longer a limited one, possessing enumerated powers, but an indefinite one. …


The powers delegated by the proposed Constitution to the federal government are few and defined. Those which are to remain in the State governments are numerous and indefinite. … The government of the United States is a definite government, confined to specified objects. It is not like the state governments, whose powers are more general.


Charity is no part of the legislative duty of the government. … There are more instances of the abridgment of the freedom of the people by gradual and silent encroachments of those in power than by violent and sudden usurpations.”


When people are asked to name the Founding Fathers of the nation, they usually reel off Washington, Adams, and Jefferson, the first, second and third Presidents in addition to their earlier role in guiding the Revolution to success.


Occasionally, someone who, like myself, loves history will add Madison, the fourth President, but Lynne Cheney’s new biography of Madison rightly identifies him as the man most responsible “for creating the United States of America in the form we know it today.” It was Madison who guided the process by which the Founders arrived at the Constitution, contributing the fundamental principles it incorporated and writing the Bill of Rights, amendments that ensured its ratification by the original states.

Cheney’s biography, “James Madison: A Life Considered” ($36.00, Viking) benefits not only from her scholarship, but from her facility with the written word, making it a continual pleasure to read for a book of 563 pages, including its notes, bibliography, and index. If you were to set aside the summer to read just one book, this would be the one I would recommend.


If Cheney’s name rings a bell, it is because she is the wife of former Vice President Dick Cheney, but she is also a Ph.D. who has been studying Madison since 1987 when she was a member of the Commission on the Bicentennial of the Constitution. These days she is a senior fellow at the American Enterprise Institute.


The Cheney’s reside in Wilson, Wyoming. She is making the rounds of radio and television shows to promote her book and, most notably, interviewers tend to ignore her book in order to pry an opinion out of her about current events and politics. One gets the feeling that most did not read her book.


Those short in stature and, compared to the other Founders, quite young, all who came to know him swiftly developed a profound respect for his intellect and his knowledge of how governments were structured with some succeeding while others failed. When Madison spoke, they listened. There were in those days “factions” (which today we call political parties) that opposed his and the other Founder’s views.


“Jefferson,” wrote Cheney, “would later say that it was a wonder that Madison accomplished so much as he had, given that he faced ‘the endless quibbles, chicaneries, perversions, vexations, and delays of lawyers and demi-lawyers’” and Madison himself was often struck “by the way that ‘important bills prepared at leisure by skillful hands’ were treated to ‘crudeness and tedious discussion’, and he had seen legislative tricks of the most blatant sort.” So the politics of Madison’s time was not unlike much of today’s.


After the Constitution was written to replace the failed Articles of Confederation it needed to be vigorously defended. America benefited greatly from the fact that its population was highly literate and it was the Federalist papers, a series of essays mostly written by Madison was the way its principles and protections were explained to the public. Chaney notes that the Federalist essay that would eventually become most famous was the first one Madison wrote.


“In Federalist 10, published November 22,1787, he set forth the failures of ‘our governments’ (rather than ‘our states’ where, after all, the Constitution would be ratified), noting the instability and injustices that had caused good citizens across the country to increasingly distrust those governments and feel ‘alarm for private rights.’”


These alarms are reflected in our times by concerns that the President is bypassing Congress to govern by executive orders, is failing to enforce laws with which he disagrees, and that we have a Department of Justice and an IRS that cannot be trusted to apply laws fairly, acting against groups and individuals with whom they disagree such as the Tea Party movement and other conservative organizations. A rogue agency such as the Environmental Protection Agency is so out of control that Congress must at some point exert powerful restraints on it.


What is remarkable about Madison’s time was the fact that he, Jefferson is lifelong friend, and Adams, all lived long lives unlike the bulk of the population. Madison would devote his life to the creation of our extraordinary government and, throughout the early presidencies including his own, to ensuring the existence of the new nation, challenged as it was by Great Britain, first during the Revolution and then in the War of 1812.


On his last day as President, Madison vetoed an improvements bill, “arguing as he had since the days of The Federalist that the general government did not have general powers. It had specified powers, and recognizing its limits was essential to ‘the permanent success of the Constitution.’”


Cheney wrote that Madison understood that “if the limits the Constitution imposed on government were unrecognized, ‘the parchment had better be thrown into the fire at once.”, but Madison was all about protecting the Constitution and the new nation. For that he is owed the gratitude of all the generations that have followed him.


It is now our responsibility to protect it because freedom and liberty always have domestic and foreign enemies.

If the Founders were alive today they would be leading the 2nd American Revolution... As it is they are likely rolling over in their graves at the actions of the most corrupt *regime* in American history...

I make NO apologies for saying so; when I hear someone say they are an Obama supporter or that they like the job he is doing, I know that I am in the presence of a fool..

I second the motion for a Second American Revolution!

I just don't see any other way to avoid a collectivist nation and slavery for We The People unless we take up arms and completely destroy the current federal government.

Once the unpleasant things are done - a purge of the Washington, D.C. ruling class into imprisonment, exile, or execution - we start all over again with a a few more safeguards added to Madison's awesome creation like limiting all federal politicians to two terms and the election of all federal judges to include the U.S. Supreme Court.