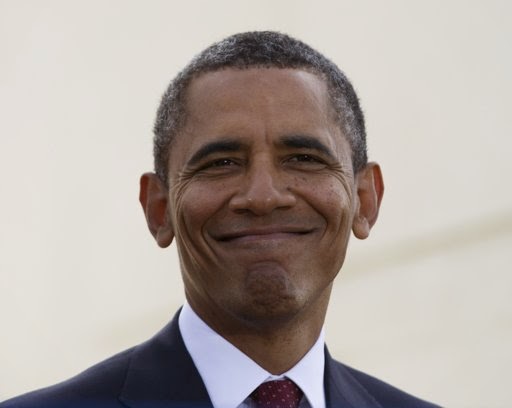 
Americans are feeling the same fear for the future that preceded the Civil War when the incompetent James Buchanan left the mess that Abraham Lincoln had to address. I don’t think we have ever had a President with less knowledge of history than Barack Obama and less ability to solve domestic economic problems and address threatening foreign ones.


“Rarely has a U.S. President been so wrong about so much at the expense of so many,” said former Vice President Dick Cheney, along with his daughter Liz, in a June 18 opinion published by the Wall Street Journal. Liz has been a deputy assistant secretary of state for eastern affairs.
My fear now is that the President is not, as I originally assumed, driven just by ideology, but that he keeps demonstrating the illegal use of powers that he does not have under the Constitution, coupled with a disdain for the other branch of government, the Congress.


If Obama is eminently impeachable, but Congress is so divided that this is not an option.


Despite what his Justice Department told him, Obama disobeyed a law requiring him to give Congress a 30-day notice for the exchange of terrorist detainees from Guantanamo Bay. His use of executive orders may meet some legal standard, but they are often his way of getting around legal limitations such as his wish to open America’s borders to the flood of illegal immigrants we are seeing.


There is some comfort in being someone who warned against electing him both times, but there is no comfort in reviewing the harm he has done to date. Only a major Republican victory in the November midterm elections will offer any protection against him until he leaves office.


Let’s just do a quick review:


He traded five members of the Taliban’s highest ranked detainees from Guantanamo for an alleged prisoner of war who deserted his unit in Afghanistan, negotiating with the Islamic criminal group, the Haqqani, known for extracting high ransoms but no mention of money has been made.


Having initiated negotiations with Iran in a futile attempt to get them to cease seeking their own nuclear arsenal, there is conjecture the U.S. will enlist Iran’s help in addressing the jihadist attack on Iraq, but Iran has been the declared enemy of the United States since it seized our diplomats in 1979 and held them hostage until President Reagan was sworn into office. Iran is the world’s greatest supporter of terror. It was behind the truck bomb that destroyed our embassy in Beirut in 1984 and a few months later killed U.S. Marines in an attack on their barracks there. It provided weapons to our enemies during the Iraq war.


He has driven the nation’s debt up so high that, for the first time in its history, its credit rating was reduced. That debt continues to grow and is pegged at $17 trillion. The price of food is beginning to soar.


Unemployment now affects the lives of those unable to find work—literally millions—and those who have ceased to look. Raising the minimum wage will only serve to further reduce job creation and opportunities. Millions are on food stamps while millions are receiving disability benefits. There is likely no way to know who legitimately deserves assistance and who does not. Increasing the rolls is seen as ensuring the Democrat Party gets their vote.


He reduced the funding of our military, reducing its fighting capacity to pre-World War Two levels in manpower and the arsenal of weapons it requires. He advocated the participation of homosexuals, a policy the military has long opposed for issues of unit cohesion and morale. He advocated more female participation in the military. Pastors and other chaplains serving the military were pressured to alter their message to the troops.


Obama is on record saying that “climate change” is the greatest enemy the U.S. military will face. Climate change has been occurring for billions of years and is entirely natural. It has nothing to do with waging war except for the circumstances on a specific battlefield and that is called the “weather”, not climate change.


Having done nothing to stem illegal immigration, the nation is now besieged by thousands of “refugees”, often very young, being bussed here from nations like Nicaragua and Guatemala. They in turn are being “dumped” in Arizona and other locations because the Texas immigration detention facilities are full. This situation is being attributed to Obama’s Deferred Action for Childhood Arrivals program that was initiated in 2012 to allow illegal immigrants who can to the U.S. as minors to escape deportation for two years. In early June an additional two years was tacked onto the program.


By pushing Obamacare—the Affordable Patient Care Act—through Congress, Obama has effectively destroyed the finest medical health system in the world, raising the cost of health insurance, interfering with the doctor-patient relationship, and causing several million Americans who already had health insurance to lose it. He lied to achieve this and the Democrats knew it. No Republican in Congress voted for it. By 2017 an estimated seven million workers will lose employer provided coverage.


Just as Obama’s indifference to fix the management problems of the Veterans Administration has resulted in needless deaths, Obamacare’s death toll will make that seem small when even policy holders are forced to wait for care because hospitals have closed or there are fewer private practice physicians.


Obama’s declared “war on coal” has already caused more than a hundred coal-fired plants producing electricity to close, reducing the production of electricity at a time the population is growing and the economy requires it for growth. The emissions from such plants had already been reduced by 90% at a significant cost. The EPA’s new regulations have no basis whatever in scientific fact. The cost of electricity is already rising for many Americans and U.S. coal is being shipped to China and India for their plants.


The nation’s moral standards have been harmed by the implementation of same-sex marriages which the President endorsed after reversing an earlier campaign position. His view that legalizing marijuana is okay will have serious implications that are already manifesting themselves at this point.


This is just a thumbnail review of what has been happening to the nation and to all Americans. We have survived incompetent presidents in the past, but Obama is unique, not just for his ignorance and incompetence, but for his reliance on lies to achieve his goal of reducing America as the one world power that has been relied upon to resist the forces of evil that threaten mankind.


Having begun with a quote by the Cheney’s, I will conclude with their view that “President Obama is on track to securing his legacy as the man who betrayed our past and squandered our freedom.”

Your reference to Buchanan and the mess he left is magnificent...

Obama has done nothing but cry about the mess he was left by George W. Bush, and granted, things could have been better, but since Obama and his supporters seem to think that he, Obama, is the smartest man in the world, wouldn't it stand to reason that Obama would have rectified the situation by now?

It seems to me that he has only made matters worse, and if you want to think of a poor sod that's going to inherit a mess, consider the successor to Obama...

...and I get cold comfort in my many predictions since 2005 the division of the country between the Right and Left would end in a Second U.S. Civil War.

In fact, in the words of Glenn Beck, we are already engaged in a Cold Civil War where former friends, and even members of the same family, refuse to associate with one another because of political differences.

In regards to the U.S. military being cut back to pre-WW II levels:

The equipment, and in many cases the same personnel, now staff the Department of Homeland Security, whose main mission seems to have become the crushing of the almost inevitable insurrection.

In reaction to this arms build up by DHS, the largely underground Tea Party Movement, in cells as small as one person, and linked only by a common ideology and the Internet, has also engaged in an arms race and stocked up on guns, ammunition and military rations.

Yes, these are civil war times in America once again.

The blood of patriots and traitors will soon water our fields.

The most ruthless and best organized.

Glenn Beck has also stated that the main problem with the patriot side is that we are not ruthless revolutionists, as are the opposition.

I submit that changes when the first battle is fought.

Alan, your first mistake is calling Obama incompetent. He's been very competent in destroying America, on time and as planned. YOU may not like what he's doing - but he and his fellow Marxist Progressive LOVE what he's accomplished.

Or don't you remember his promise that he'd fundamentally transform America? Pity no one thought to ask him what he meant back when he said it.

Lime, over 40% of the us populations still think he's doing a great job. There is no defense against stupidity.

Lime, over 40% of the us populations still think he's doing a great job. There is no defense against stupidity.

Fortunately or otherwise, Congress shares the blame for our current situation. As you noted, Obama is eminently impeachable on several counts...but neither the Repubs nor the Dems have the stones to step up and do the deed.