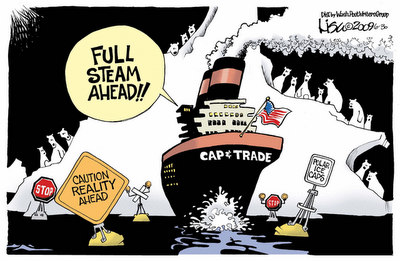 If there is one thing Americans began to rapidly conclude following his inauguration in January, it is that President Barack Obama lies all the time and that those lies are often blatant.

In pursuit of the “Cap-and-Trade” act that is a huge tax on all energy use in America, Obama’s favorite mantra is that massive subsidies to wind and solar energy producers, as well as biofuel producers, will generate millions of new “green” jobs. Perhaps the worst part of this lie is that they will actually destroy jobs.

In the July edition of Energy Tribune, Michael Economides and Peter Glover co-authored “Green Jobs: Fast-Tracking Economic Suicide.” I know Economides and he is internationally recognized as one of the world’s authorities on energy issues.

“Creating ex nihilo—literally, out of nothing—used to be a theological concept, God’s prerogative. Today, it seems, President Obama and certain Western politicians claim to possess the ability to do it,” write the article’s authors. “Against all the laws of economics and the marketplace, President Obama and others believe they can create millions of ‘green’ jobs ex nihilo, literally out of thin air, via cap and trade.”

There are two driving forces behind Cap-and-Trade. One is the claim that “green” energy producers will generate new jobs if the government just provides a combination of legislative mandates for its use (wind and solar) and, two, that a massive new trading apparatus in “carbon credits” for the generation of “greenhouse gas emissions” will protect the Earth against “global warming.”

It is increasingly obvious to everyone that the Earth is cooling, breaking thousands of previous records for cool weather in cities around America and similar conditions worldwide. The tide, too, is turning against the “global warming” hoax that is failing in the face of the obvious cooling weather and climate.

Using “global warming” to justify any government mandates or to empower the Environmental Protection Agency to regulate carbon dioxide as a “pollutant” is a lie. It is a very big lie. Carbon dioxide is vital to all life on Earth.

As the Energy Tribune authors point out, “To generate real industrial jobs, however, you need a basic commodity to trade, such as oil, gas or coal.” This is in marked contrast to wind and solar energy. “The trouble is that alternative energy technologies currently don’t work. That is to say, they remain inefficient, offering a very poor energy return on investment.”

“Cut off the flow of public subsidies and the alternative energy industrial revolution would grind to a halt tomorrow.”

In the real world, in 2008 the Marcellus gas industry in Pennsylvania generated $2.3 billion in total value added, more than 29,000 jobs, and $240 million in state and local taxes. If you extrapolate that to other sectors of the energy industry, you would be looking at thousands of real jobs, not lost jobs, but President Obama and his sycophants would rather you not know about that.

This is not mere conjecture. The experience of European Union nations demonstrates that “for every green job created, a real job is destroyed elsewhere in the economy.” Carbon regimes drive manufacturing to nations that do not impose limits on coal, oil and natural gas.

For example, “Germany’s Angela Merkel is insisting on major exemptions for German heavy industry come December’s global climate summit in Copenhagen. Merkel’s government is also supporting the building of 26 new coal-fired power plants across Germany.” Compare that with one hundred such plants whose construction was thwarted in the United States by environmental groups such as the Sierra Club and Friends of the Earth.

“In June, deputy head of Poland’s Solidarity trade union, Jaroslaw Gresik, estimated that the EU’s climate policy would cost 800,000 European jobs.” Widely circulated data from a study of the heavily subsidized wind and solar energy industry in Spain revealed that its alternative energy program destroyed nearly 110,500 jobs elsewhere in its economy or 2.2 jobs destroyed for every ‘green job’ created. Consumers there have seen their electricity rate increase by 31 percent.

Other independent studies reveal that Obama’s claim of five million new “green” jobs would cost an estimated $500 billion to create.

Wake up, America! The Big Lie about “Green jobs” is going to cost jobs. The Cap-and-Trade bill is a massive tax increase.

The summer recess is the time to contact your Senator and Representative and tell them you oppose Cap-and-Trade. If it is passed, it will undermine the economy, cost jobs, and leave the nation increasingly dependent on the import of energy resources while our own lay underground, unexplored, untapped, unused.
Posted by Alan Caruba at 1:37 PM

I have to be away for a while, but before I go I'll throw a couple of more links your way, like....

More unemployment is really less, or The Pain In Spain stays mainly in the unemployment lane.
...and...
How warming makes it feel colder
...and...
What could be more Socialist than The worse the economy, the better.

Thank you Alan. I have shamelessly lifted this post to mickysmuses.blogspot.com, with credits.

Great commentary, Alan....what would we do without you?

I have called my senator and Rep so many times they know my name. Passing Cap and Trade would be catastrophic to the American economy. However, since I sincerely believe that is Obama's intention I doubt he will listen to "we the people." It will take extraordinary measures to stop this "community organizer."

Town Hall Meetings across the country are proving that the people are up in arms over Obama and his administration's attempt to bring our country down. Next step....violent protests.

Now that the anti-science, superstition-based initiative presidency is over, we need Manhattan projects to make us great again and boost us out of this Grotesque Depression. First we must provide free advertising-based wireless internet to everyone to end land line monopolies. Better yet, renationalize the telephone companies like in 1917 and now put them and the DTV fiasco and the internet under a renationalized post office. Then we must criscross the land with high speed rail. Because bovine flatulence is the major source of greenhouse gases, we must develop home growable microbes to provide all of our protein. Then we must create microbes which turn our sewage and waste into fuel right at home. This will end energy monopoly by putting fuel in our hands. We must finally join the metric system and take advantage of DTV problems to create a unified global standard for television and cellular telephones instead of this Anglo Saxon competitive waste. We must address that most illness starts from behavior, especially from parents. Since paranoid schizophrenia is the cause of racism, bigotry, homelessness, terrorism, ignorance, exploitation and criminality, we must provide put the appropriate medications, like lithium, in the water supply and require dangerous wingnuts who refuse free mental health care to be implanted with drug release devices. Churches should be licensed to reduce supersition and all clergy dealing with small children should be psychiatrically monitored to prevent molesting. Osama bin Laden and Timothy McVeigh were the ultimate superstition based initiatives. Aborting future terrorists and sterilizing their parents is the most effective homeland security. Preganancy is a shelfish, environmentally desturctive act and must be punished, not rewarded with benefits, preference and leave. Widen navigation straits (Gibraltar, Suez, Malacca, Danube, Panama and Hellspont) with deep nukes to prevent war. In order to fund this we must nationalize the entire financial, electrical and transportation system and extinguish the silly feudal notion that each industry should be regulated by its peers. Technology mandates a transformation of tax subsidies from feudal forecloseable debt to risk sharing equity. Real estate and insurance, the engines of feudalism, must be brought under the Federal Reserve so we may replace all buildings with hazardous materials to provide public works. Insects, flooding and fire spread asbestos, lead and mold which prematurely disables the disadvantaged. Disposable manufactured housing assures children are not prematurely disabled and disadvantaged. Because feudalism is the threat to progress everywhere, we must abolish large land holdings by farmers, foresters or religions and instead make all such large landholding part of the forest service so our trees may diminish greenhouse gases. Darwin led to the worst colonial, militarist, attrocity and stock market abuses in history - Lamarkian inhertiance and mitochondrial DNA show that Darwin was not all he is crackered up to be. We must abolish executive pay and make sure all employees in a company are all paid equally. We must abolish this exploitative idea of trade and monopoly and make every manufactured disposable cottage self sufficient through the microbes we invent. Southern Oligarchs destroyed the Democarts in the sixties and destroyed the Republicans this decade - they would not allow viable candidates like Colin Powell, Mitt Romney or Condi Rice to even be considered!

Vernon, you obviously put a lot of time in composing your comment, so I will post it here on that basis alone.

Beyond that, I find myself in disagreement with most of it for too many reasons to cite.

I suggest you would probably be happier post comments SOMEWHERE ELSE in the future.

I recently came accross your blog and have been reading along. I thought I would leave my first comment. I dont know what to say except that I have enjoyed reading. Nice blog. I will keep visiting this blog very often.

Thank you, Margaret. Welcome to the Warning Signs family.