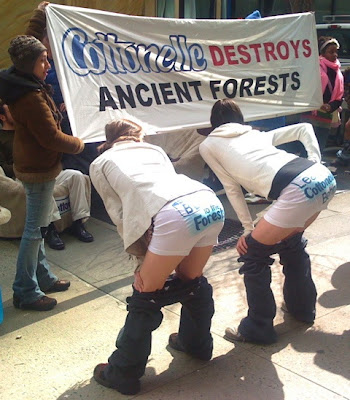 Anyone who has been paying any attention to the environmental movement has got to have concluded it is insane.

• While the United States stands poised on defaulting on its ever-growing debt—the highest in the nation’s history;

• While wars and insurrections are waged in the Middle East, across northern Africa, and in the Ivory Coast;

• While Japan struggles to deal with a major earthquake and nuclear plant meltdown;

• While Islam wages terrorism worldwide, and

• While European nations attempt to deal with their own financial crisis, the environmentalists—Greens—engage in the most absurd frauds and nonsense since the Dark Ages.

In news from the United Nations—a misnomer if ever there was one—Bolivia is proposing a UN treaty that will give “Mother Earth” the same rights as accorded to human beings. It has just passed a domestic law that grants these rights to bugs, trees, and all other natural things in its own country.

According to the Bolivian proposal, humans have sought to “dominate and exploit” the Earth in ways that threaten the “well-being and existence of many beings” such as malaria-bearing mosquitoes, lice and ticks that spread disease, trees that provide timber for shelter and countless other uses, venomous snakes, and every other creature upon which we depend for food---beef, chickens, and fish, to name just three.

The Bolivian law, if successful, will end the extraction of all natural resources in that nation, thus effectively plunging it into insolvency. That is a definition of insanity. It is also a description of the United States of America where access to its vast reserves of coal, natural gas, and oil is being systematically denied by the government.

This is occurring as the Environmental Protection Agency continues its effort to declare carbon dioxide (CO2) a “pollutant” that must be regulated, despite the fact that is vital to all life on Earth.

In America, there has been a resurgence of bed bugs, formerly controlled by DDT. The EPA recently awarded $550,000 in grants to the University of Missouri, Texas A&M University, the Maryland Department of Health and Mental Hygiene, Rutgers University, and the Michigan Department of Community Health, for bed bug “education, outreach, and environmental justice departments.” So, instead of authorizing the use of a pesticide to rid us all of bed bugs, it wants to “educate” us to live with them. That’s insane.

The U.S. Forest Service scientists will hire field crews “to gather information on the conditions of forests from approximately 1,000 sites in five western states, Alaska, California, Hawaii, Oregon, and Washington, “for a comprehensive study on the health of trees in urban areas.” No mention of the millions this will waste, but it is heralded as part of Obama’s “America’s Great Outdoors Initiative.”

At the same time, Agriculture Secretary Tom Vilsack has just announced that the department will spend $1 million in “cost-sharing funding for children’s programs in 18 States and Puerto Rico, furthering USDA’s commitment to connect young people around the country with America’s great outdoors.” Why?

A rational nation that’s $14 trillion in debt, borrowing 40 cents of every dollar it spends, would not do such things, but the United States does while its President calls for higher taxes. And why not? The Obama administration spent up to $200 million to promote Obamacare. While that was happening, 26 States joined in demanding its repeal and a U.S. federal court judge declared it unconstitutional.

As the nation struggles to reverse an unsustainable trend toward financial doom, Greens are trumpeting an “Extended Producer Responsibility” program to achieve “waste reduction and increased recycling” that would make manufacturers “liable for the cost of recycling TVs and other electronics at the end of their useful lives” and alter the way they package goods. This is not the manufacturer’s responsibility and will increase the cost of everything everyone purchases.

On Earth Day, everyone will be exhorted to engage in “A billion acts of Green” and to purchase “Green” products, all of which cost more than everything else one purchases in the normal course of everyday life.

We are only now recovering from the greatest fraud of the modern era, “global warming.” The United States wasted an estimated $50 billion on so-called scientific research, all of which existed for the purpose of advancing this hoax. It is rarely mentioned any more except for its fraudulent new name, “climate change.”

As we approach April 22nd, designated “Earth Day”, it would be well to recall that it is the birthday of Vladimir Illich Lenin, a devotee of Karl Marx and a man who plunged Russia into more than seventy years of Communism until the Soviet Union collapsed in 1991.

Environmentalism, worldwide and in the United States of America, is devoted to the collapse of every scientific and technological advance of the past century, along with the capitalist system that made them possible.

"Hang on to my hat" sez I. Here in Santa Cruz "earth day" is about as important as Christmas or Easter.

I love to document the crazies and their devotion to Gaia.

But then, I am probably mean-spirited and I don't inhale.

I am speechless.......! On second thought after God gave man dominion over all beast, fowl, etc. did he not drown all the morons?

Good article. Would that more people were willing to think logically. Radical environmentalism is the new paganism: "worshiping the creation rather than the Creator".

@Dave: It's all that exhaling you do that puts more CO2 in the atmosphere! Global warming, man!

And when these environmentalists have reduced the economy to a basket case, leaving the country with high unemployment, poverty, food shortages, poor health treatment and increased diseases and high mortality rate, the environmentalists will be the first ones to be complaining ... how could the government have allowed things to have gotten so bad?

You forgot to mention that the resources in the Nation's National Forests are also locked up. China is buying logs like crazy. We could sell them some and solve a lot of economic problems.

I keep encountering reasons to post this quote from Lenin :

We must be ready to employ trickery, deceit, law-breaking, withholding and concealing truth. We can and must write in a language which sows among the masses hate, revulsion, scorn, and the like, towards those who disagree with us.

Vladimir Ilyich Lenin quoted in Max Eastman : Reflections on the Failure of Socialism