History is No Help to the Federal Reserve 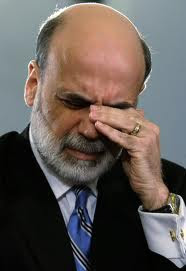 Federal Reserve Chairman, Ben Bernanke, gave a press conference on Wednesday and, try as I did, I fell asleep almost immediately. For those suffering from insomnia, I would recommend you “take two Bernanke’s and call me in the morning.”

At the time of his appointment Bernanke was widely known as an expert on the history of the Great Depression. It was commonly thought that he would avoid putting the nation through a similar experience, but a long, deep recession has put that in doubt.

In “New Deal or Raw Deal”, historian Burton Folsom, Jr., identified three major causes of the Great Depression, beginning with a Smoot-Hawley Tariff Act on imported goods that was signed in June 1930 by Herbert Hoover. It was the highest tariff on imported goods in U.S. history. Other nations retaliated. “Our exports, therefore, dropped from $7 billion in 1929 to $2.5 billion by 1932.” The result was that “By July the stock market had lost one-third of its value in ten months”, a second major cause of the Depression whose beginning is generally dated to the Wall Street crash of October 1929.

The other cause was due to the fact that, in the three years leading up to the bill, “the national debt balloon(ed) from $1.3 billion to $24 billion.” Our current national debt is equal to our entire Gross Domestic Product, the value of all of the nation’s goods and services.

Folsom identified the third leading cause as “the poor performance of the Federal Reserve. “In practice, the Fed had raised interest rates four times, from 3.5 percent to 6 percent, during 1928 and 1929. That made it harder for businessmen to borrow money to invest, which hindered economic growth.”

Under former Chairman Alan Greenspan and Bernanke, the Fed has kept the interest rates it charges banks to nearly zero. Bernanke is no doubt aware that the Fed’s failure to lend money to cash-hungry banks led to the collapse of hundreds during the Great Depression.

Fast-forward to present times and we see that the Fed has literally flooded the economy with cash, essentially by simply printing money out of thin air. All of it is backed by the “full faith and credit” of the government.

On April 25, The Wall Street Journal headlined an article, “Fed Searches for Next Step” noting that it “is likely to begin closing a wide-open credit spigot this week—but faces a major decision: when to start draining the excess credit out of the economy by raising interest rates.”

Whether the economy was infused with great gobs of cash or whether that liquidity is slowed, the Fed—then and now—is caught in a vice because history demonstrates that neither action had the desired purpose. If this was a game of Monopoly, the players could put the board away in its box, but neither history nor current trends point to anything other than a severe depression.

The rating service, Standard & Poors, recently issued a warning that the U.S. debt was slipping into a “negative” situation and this has been followed with a prediction by the International Monetary Fund that the U.S. economy will be overtaken by China in just five years. S&P is famous for its failure to spot bad guys like Enron, to whom it gave high ratings right up to the day it collapsed, nor should we believe the IMF propaganda which suspiciously tries to panic Americans.

The Fed was created by a small group of bankers and came into being in 1913. In good times and bad it has functioned in concert with international banks to control the volatility of the financial marketplace and sustain the viability of the individual nations they represent. The Fed functions largely in secret. The oversight that Congress is supposed to exercise is much the same of its regulatory agencies that have rarely seen trouble brewing, nor been able to do much about it except to clean up the mess with taxpayer’s funds.

The problem in the 1930s and now is the national debt, the result of insane, profligate spending. Those in the White House and the Democratic Party are opposing any rational steps to reduce it.

Instead, it enacted Obamacare, legislation that will further crash the economies of individual States. Some twenty-eight States are already on record opposing it. An effort to have it declared unconstitutional was greeted by the Supreme Court with a refusal to expedite the case just before the judges began a three month vacation.

An April 27, 2010 Cato Institute briefing paper by Arnold King presciently noted that “Recently, the Federal Reserve has significantly altered the procedures and goal that it had followed for decades. It has more than doubled its balance sheet, paid interest to banks on reserves held as deposits with the Fed, made decisions about which institutions to prop up and which should be allowed to fail, invested in assets that expose taxpayers to large losses, and raised questions about how it will avoid inflation despite an unprecedented increase in the monetary base.”

The Cato paper was titled “The Case for Auditing the Fed is Obvious.” The fate of the nation is held in the hands of the Federal Reserve. It performed poorly in the late 1920s and 30s, and confidence in its ability to extricate the nation from its enormous debt may well be misplaced.

A combination of unsustainable entitlement programs, too much spending, and the collapse of the housing market that resulted from Fannie Mae’s and Freddie Mac’s belief that housing prices would never fall has brought us to this point in the wake of the 2008 financial crisis.

The response by the government, however, was to buy the bank’s bad debts and engage in multi-billion dollar “stimulus programs” which we were told would create employment and put the economy on track to recovery. It has not happened.

Instead, taxpayers have had the nation’s future put in jeopardy into the next and further generations, some of whom are as yet unborn.

Despite the Fed’s printing presses, the U.S. dollar is in decline at the same time that the price of gasoline, food, and everything else is rising.

The 2010 elections that put Republicans in charge of the House of Representatives, the branch of government that initiates spending bills, has resulted in partisan warfare on Capitol Hill as the GOP weighs what steps it can take. Ambivalence about raising the debt ceiling reflects GOP concerns regarding the 2012 national elections and their fear that they, not the Democrats that regained control of Congress in 2006 will be blamed for the current crisis.

Suffice to say that both political parties deserve blame for years spent initiating excessive spending and ignoring the warning signs.

Meanwhile President Obama has declared his candidacy airily demanding that taxes be raised on “the rich” at a time when raising taxes is the worst possible choice to make as the economy struggles to recover. For the passed two years, the Obama administration has engaged in every effort to undermine and destroy the economy.

John Adams, one of the Founding Fathers and the nation’s second President, warned “Remember, democracy never lasts long. It soon wastes, exhausts and murders itself. There never was a democracy that did not commit suicide.”

2012 looms as an election year in which Americans will decide whether to change course or, indeed, commit suicide.

We either get a REAL Conservative and an America 1st PATRIOT in the White House or the vacationer in chief is going to believe himself to be in possession of a Divine mandate to rule America...

Since the Great Drought of 1930 (as it was referred to at the time) kept on going until about 1939, and since beginning in the 1800s American farmers exported large quantities of agricultural products to many nations, I would guess that a lack of agricultural products to export had a good deal to do with exports falling substantially beginning with the extremely poor harvest of 1930.

Topsoil was completely blown away by the wind during the "Dust Bowl" days in 17 Midwestern states.

I don't guess that the fact that it was called the "Great" Depression(the "Long" Depression in England) because it hit hard people of a good many other nations as well as the US of A wouldn't have caused a substantial reduction in exports . . . back in the long ago days where "cash on the barrel head" was how the vast majority paid for goods.

Politicians always think that what happens is due to politics, when, far more often than not, it is that harsh mistress, "Mother Nature" driving politics . . . not the other way around.

The "Great Depression" didn't end so much as directly after WWII, ordinary people were given that thing called "credit", whereby anticipated future earnings could be spent in the then present, with the penalty of interest attached. As time passed, getting credit became more and more easy to obtain.

Improvements in an economy can be had in the long term only by adding value (not merely adding price). Since few are allowed in the US to do that which actually adds value anymore, because of gone-lunatic local, state and federal agencies, it's looking to me to be a long haul indeed.

Larry, after WW II, the US was the only industrialized country with the capability for full production. We couldn't avoid making money. Add to that the amount of accumulated savings from the higher average wages, since during the war there was little to buy in the way of "consumption" frou-frou.

I wandered off to town, yesterday, doing miscellaneous errands. Got home, got on the Internet, went to Kitco.com and instantly knew the gist of Bernanke's babble.

Mixed emotions: My billfold's doing great, but it's because of the ruinacious financial situation in my country.

I agree, Desertrat. But still, we are now rapidly going down the tubes from any economic standpoint.

Well, I am one of those old geezers, been around the block more than a couple of times. Big Government and modern mythlogy has about done us in.

It has amazed me for some time that Bernanke is considered an expert on what actually caused the Great Depression.

Initially I was happy to see a person in his position with that kind of understanding until I realized he was repeating all the very same mistakes that made a depression the Great Depression. And they didn't have financial obligations of 100 trillion or more to worry about then.

Soooooo... when they say he is an expert on the cause of the Great Depression they must mean that he idiotically believes that it was capitalism that was responsible and FDR fixed it. Don’t we feel all better now? I do! Why? Because the outcome is now completely predictable!