War for No Particular Reason 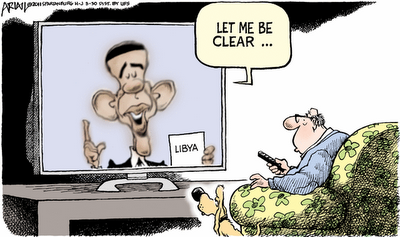 Thanks to the Obama administration, we have now entered upon a new phase of foreign policy. It is war for no particular reason.

Why are we doing anything in Libya? We’re not messing around in any of those other places that involve governments shooting at their own people. Obama famously did not want to “meddle” when the Iranians filled the streets of Tehran in 2009, protesting a stolen election by Mamoud Imanutjob and Ayatollah Comeandgetme.

Americans are connoisseurs of invasions. We know a good one when we see it and are not easily fooled by those who say, “We’re dropping thousands of pounds of ordnance and launching numerous missiles, but we are not in a war. It’s a kinetic military action.” Yeah, right.

Telling Americans that their nation—without so much as a phone call to Congress—has launched a military action over (but not IN) Libya and that NATO is really running the operation, (with a Canadian general taking orders from two American generals) suggests that the White House thinks we are really STUPID.

We know what an invasion looks like. Bush41 had a great one in Kuwait and Bush43 had an even better one in Iraq. It may not have been D-Day, but it was good enough for a generation born too late to remember Normandy Beach. When it comes to invading countries, we are the gold standard.

Conservatives wonder why the liberals screamed bloody murder when Bush43 invaded Iraq after getting all kinds of UN resolutions and authorization from Congress, but are curiously silent when Obama begins bombing the hell out of Tripoli “for humanitarian reasons.” Of course, in fairness, liberals never want to invade any place. That’s why you don’t find many liberals in the Marines and other branches of service.

How do you tell a good despot from a bad one? Let me explain. There are the pro-U.S. ones who cooperate with us and there are all the others. As some statesman once said, nations have interests, not friends.

It is necessary to understand that those generating an Islamic revolution have no love for the monarchs and the former colonels and generals who run Muslim nations. Their ideal is something like Iran. The initial goal of al Qaeda, for example, was (and is) to overthrow the ruling family of Saudi Arabia. They, in turn, told bin Laden to get out and stay out.

The present unrest in Muslim nations is the result of the convergance of al Qaeda and Iranian agendas to exercise control over those nations. But first, they intend to destroy everyone, Jew, gentile, and Arab alike, in Israel. According to Islamic lore, they can’t really take over the world until this is accomplished.

Americans have been slow to grasp that the Iranians have been preparing since 1979 to sweep across the region and the world to ensure that Islam (Shiite version only) is the only religion with the power to dictate to all others. There is zero room for tolerance in Islam, a “religion” that separates the world into dar al Islam and dar al Harb (the world of war!)

As a non-war the Libyan operation is especially disappointing since the so-called rebels at this early point have less cohesion than a Hell’s Angels chapter. This has not deterred talk of “arming” them. However, the latest word out of Libya is that the “rebels” made a couple of million by selling thousands of mustard and nerve gas shells they found in military facilities around Benghazi to the Palestinian terrorist organizations, Hamas and Hezbollah. Let those creeps arm themselves.

How was it that a President who spent weeks agonizing over what to do in Afghanistan took only a few days to decide that the U.S. should start lobbing missiles into Gadhafi’s Libyan compound?

One obvious answer is that the man is just a moron. The other is that he lacks any serious opposition from Republicans and Democrats alike, and for now is being allowed to get away with it.

The U.S. Navy and Marines showed up in Tripoli in 1801 to deal out some hurt and a message to the Barbary pirates harassing our merchant ships. President Thomas Jefferson concluded that killing the pirates was cheaper than paying them the bribes they demanded. He was right.

The rebellion against Gadhafi appears to have a contingent of jihadists that include al Qaeda’s professional mujahideen that migrate from war zone to war zone, but the bottom line appears to be that folks throughout the Middle East are just fed up with the current crop of despots. Forty years in control seems to be the cut-off point whether it was Egypt’s Mubarack, Libya’s Gadhafi, or the former Tunisian tough guy, Zine el-Abidine Ben Ali.

This Libyan non-war reeks of having been a political decision. It is surely not a military one. Odds are that Obama is not paying attention to what his generals are telling him and it’s for damn sure he doesn’t care what the U.S. Constitution has to say on the subject.

No one knows how this kinetic farce will play out, but since Obama is channeling Jimmy Carter, there is a strong likelihood the U.S. is going to end up looking bad and events in the Middle East will just get worse.

Boy Blunder knows exactly what he's doing, destroying America as we knew it was his only goal... And he's nearly accomplished it too...

@TexasFred:
We are 675 days from putting an end to that.

Maybe you didn't notice, but he's just announced his re-election campaign. Always good to start with a war, especially if it's short and successful.
And there's the problem, I spent 5 years in Libya, Colonel G happens to have a lot of support, and is much more popular than the press would have you believe. My money has been on the bad guy from the start, so the only way this mess will end is when military boots are put on the ground, and that means it won't be either successful or short.

Damned straight, Alan. It's necessary to summarize things, early and often' when it comes to analyzing what President Zero is up to. And, as the song goes, "You do it better....."

You're so right! "Walk softly" now seems to mean "stamp 'em out" and the Big Stick has an erectile disfunction.