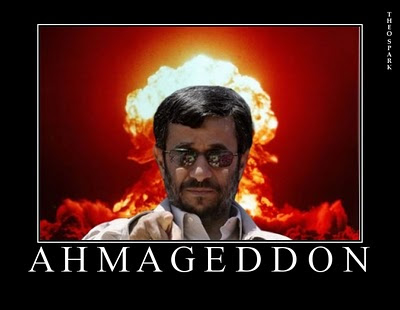 In the months and years leading up to the beginning of World War Two, all the parties knew full well Hitler’s intention to start a war. When he struck a deal with Stalin to divide Poland, the die was cast. The invasion came in September 1939. Previously, diplomats had met with the Nazis to offer them the former Czechoslovakia and turned a blind eye to other provocative events.

World War Two was preceded by Hitler’s “Mein Kampf” that spelled out his plans for Europe’s Jews and the torrent of lies that led to war and the genocide that became known as the Holocaust.

It is not surprising that history is repeating itself as in the case of an April 7 letter to The Wall Street Journal by Alireza Miryousefi of the Iranian Mission to the U.N. “There is no evidence of any military diversion” in Iran’s nuclear facilities claimed Mr. Miryousefi, who went on to assert that “the real threat of nuclear proliferation” was Israel which he described as “the Zionist regime.”

Despite Iran’s support for two terrorist organizations, Hezbollah and Hamas, it was Israel, said Mr. Miryousefi, that was “the biggest terrorist and apartheid regime.”

Today, everyone knows the Iran’s crazed ayatollahs intend to secure nuclear weapon capability and everyone knows that, when they do, they will attack Israel with them. They have never ceased to call for its destruction. It is not a question of if, but when.

How close is “when”? The Iranians just released a video titled “The Coming is Near” that describes the current events in the Middle East as the prelude to the coming of the Twelfth Imam, the Mahdi, a figure particular to the Shiite branch of Islam and one that Islamic scriptures say will lead the armies of Islam to victory over all non-Muslims in the last days.

In a nuclear age, as Nikita Krushchev, a former Premier of the Soviet Union, once said, “The living will envy the dead.” Those were the days of the Cold War and, with both the U.S. and Russia possessing nukes, the concept of mutually assured destruction, MAD, was understood. This, however, does not apply to the ayatollahs. They need massive destruction to bring about their Islamic End Times scenario.

In a recent Wall Street Journal interview with Bernard Lewis, the West’s leading scholar on the Middle East, he pointed out that the mullahs “are religious fanatics with an apocalyptic mindset. In Islam, as in Christianity and Judaism, there is an end-of-times scenario—and they think it’s beginning or has already begun.”

The result, said Lewis, is that “mutually assured destruction is not a deterrent—it’s an inducement.”

In the days leading up to World War Two, the diplomatic choice was appeasement. Today, hope is that the mullahs can be deterred long enough that Iranians will somehow bring about regime change from within. The computer virus, Stuxnet, had the affect of interfering with the enrichment process necessary to weaponize uranium, but may not now be a factor.

In the meantime, the Gulf Cooperation Council, composed of six GCC states are discussing a proposal to identify and deport an estimated 20,000 Shiites linked to Iran. In Kuwait the plan would focus on Lebanese Shiites with links to Hezbollah and Iran’s Islamic Revolutionary Guard Corps.

It is believed that many Iranian agents have been activated this year and, as such, pose a security threat. Said one GCC insider, “For years, the GCC knew of these people, but looked the other way. We can’t look the other way anymore.”

The news, unfortunately, just keeps getting worse and worse. In the muddle that represents the effort to overthrow Libya’s Gadhafi, DebkaFile reports that the “rebels” have sold thousands of chemical shells found in Benghazi to Hezbollah and Hamas, two puppet organizations funded by Iran.

When you add to that the thousands of rockets cached in Lebanon by Hezbollah and the rocketing that has been reinstituted from Gaza by Hamas, you have a trigger for a wider war.

Specifically, you have the elements of the destruction of Israel by the Iranians and the so-called Palestinians, a stateless group that have been the pawns of Iran and Arab nations for more than six decades.

In late March, Senators Mark Kirk (R-Ill) and Kirsten Gillibrand (D-NY) were joined by twenty-five other Senators who sent a letter to Secretary of State Hillary Clinton asking her to identify specific steps the administration is taking to press the Palestinian Authority to end the “dangerous incitement against Jews and Israel.” The letter was sent in the wake of the terrorist murder of the Fogel family in Itamar and a bombing of a civilian bus in Jerusalem. A school bus has since been attacked.

You don’t have to be a CIA analyst to know that events in the Middle East will be exploited by the Iranians to bring about their apocalyptic End Times aspirations and that the destruction of Israel is, in their view, the trigger. After Israel, the United States and Europe will be next.

While in the long run the mainstream Sunni version of Islam is a threat to the West, the Shiite model of Iran is a bomb with the fuse already burning toward an explosion of world war at any moment.

Interesting how history is repeating itself in 2011 complete with Israel in the role of 1939 Poland and Iran playing Nazi Germany while the West plays the appeasement game.

But unlike Poland 1939 version that was overcome in a three week blitz by Hitler and Stalin, Israel will not go down without one hellva fight with a first class modern military establishment armed to the teeth with over 400 nukes operating under The Samson Option.

It's a real shame that Iran can't have an earthquake AND a tsunami, and the ensuing meltdown would be hilarious...

Idiotic article, written by a total ignorant, brainwashed moron. Luckily, not many people wasted their time on it. Iran doesnt want to bring Armageddon, its not in their religion. They believe in prophet and that the end will come AFTER he visits Earth, but it doesnt say that they MUST cause Armageddon, its against their belief. Islam was deliberately misinterpreted in the West and in the rotten country like US, so that people thought that Iran is fanatical and dangerous. Israel and US are the most dangerous right now and trying to finish this world, and yo are all too blind to see it and prefer to believe crap about Iran.

Nika: So, apparently the daily threats to destroy Israel are just for fun and the 444 days Iran held US diplomats hostage was just some kind of Iranian joke.

And the sanctions other nations have opposed on Iran to stop its nuclear program have nothing to do with its threats to Europe, etc?

No sane person wants Armageddon under and circumstance, but a rational person would take steps to avoid its happening.

America wants to avoid a confrontation with Iran. Let's hope Iran does as well.