The Harm a President Can Do 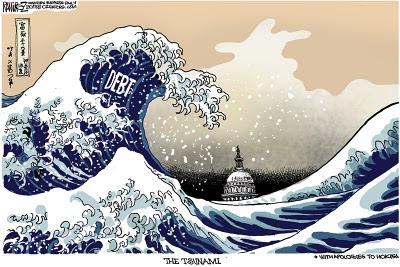 The announcement that Barack Hussein Obama will run for reelection was greeted with little fanfare and less surprise. In order to raise money, he needed to make it official and he was quick to join Rev. Al Sharpton, a man with a dubious history of histrionics, at a Harlem event.

Even with the data available, two years into his first term, it is difficult to grasp how much harm he has done to the nation as its elected leader.

Despite the fact that, until November 2010, the Congress was controlled by the Democrats, he was so busy during his second year that he could not find time to present Congress with a budget. The government shutdown is pure political theatre and should be avoided. If it comes, it will be the result of a political calculation that the President can benefit from it.

Obamacare, the hallmark of his political legacy, is opposed by 26 U.S. States and has been declared unconstitutional in a federal court. The House has voted to repeal it. Hardly a week goes by without finding billions in new costs buried within its pages, all of which expand the size of government beyond imagination.

In two years, the nation has accumulated debt at a rate more than 27 times as fast as its entire prior history since the day George Washington took office. In January 2009, when President Obama was sworn into office, the national debt was $10.627 trillion. Today it is $14.052 trillion and rising.

The leadership that the world has long looked to America to provide has dissipated. The nations of the West, in particular the European socialist nations, have also spent themselves into penury. Portugal is the latest to cry out for help. Greece, Ireland, Spain, all once among the great powers, have drained their coffers with cradle-to-grave assurances that the government would always pick up the tab.

After two years in which every regulatory obstacle, including an illegal “moratorium” on deep water drilling for oil was imposed, the price of West Texas crude oil went from $38.74 a barrel to $99.02. Other commodities, soybeans, sugar, and corn have all seen similar increases. The price of corn has more than doubled in just twelve months.

America has enormous reserves of oil, coal, and natural gas. It has long been a giant agricultural economy, but all this potential wealth is being throttled by men and women in the Obama administration who think Americans must be forced to change their driving and eating habits. In a consumer-driven economy, they want Americans to consume less.

When President Obama was sworn in, there were 2,600,000 long-term unemployed. Today there are 9,193,000 Americans in that category. People living in poverty in America have, in just two year’s time, gone from 39,800,000 to 43,600,000. This occurred during a time when massive “bailouts” were undertaken by the government. They are now widely regarded as failures.

The greatest automotive manufacturer in the world, General Motors, is for all intents and purposes owned by the government. Auto union jobs had to be saved even if taxpayers had to have their taxes diverted for that purpose. Having brought the company to ruin with outrageous work, wage, health, and pension demands, they were still to be rewarded by the Obama administration. The heads of public service unions, among the largest in the nations, have enjoyed an open-door policy at the White House.

Having been elected by campaigning against the war in Iraq, President Obama expanded the number of troops in Afghanistan. While U.S. troop presence in Iraq was being reduced, the President suddenly engaged the nation militarily in Libya without any authorization from Congress.

With one glaring exception, no cohesive foreign policy regarding the Middle East exists. Israel, the only true democracy in the Middle East, an ally of the United States, surrounded on all sides by enemies and threatened daily by Iran, has been abandoned.

Egypt’s Mubarack was publicly abandoned, but Iran’s Ahmadinejad’s stolen election evoked no response when people took to the streets in Tehran to protest it. Col. Gadhafi remains in control of Libya. Syria’s dictator was called “a reformer.”

Domestically, the President calls for windmills to produce energy when they remain one of the least practical means, sustained solely by government subsidies and mandates. The factory in which he made the call belongs to a Spanish company. His call for solar energy is equally fatuous. High speed rail is yet another foolish initiative.

The last two years have been testimony to the harm a President can do to a nation and yet, despite the obvious harm being imposed on millions of Americans, the President continues to enjoy the support of people for whom the growth of the government, the increase in spending, and the nation’s loss of leadership in the world is not understood and will not be until it is too late to reverse the damage.

I'm afraid "harm" is not the correct term as to what this President has done to our country. I firmly believe in my heart that his is a systematic tear down of everything this country stands for from leadership of the free world to our very sacred liberties. The sad part is that there are so many people who are blind to the basic facts be they indoctrinated young folks fresh out of school to the welfare state mentalities so many suffer from in which the only thing that matters is "what they are owed!

To give him credit, he has achieved one impossible feat. Jimmy Carter is no longer the worst president in history.

In the sage words of Rush Limbaugh:

So three big cheers for "The Donald" who may be elected president simply because no other big name Obama opponent has the guts to go after the "Magic Negro" with hammer and tongs, since they're afraid of being called, "RAA-CIST."

To give him credit, he has achieved one impossible feat. Jimmy Carter is no longer the worst president in history.

This indecisive lawyer was one of the leading causes of the U.S. Civil War, in my never humble opinion.

So only if Obama enables a SECOND U.S. Civil War and more terrible conflict will Obama be the WORST president in America.