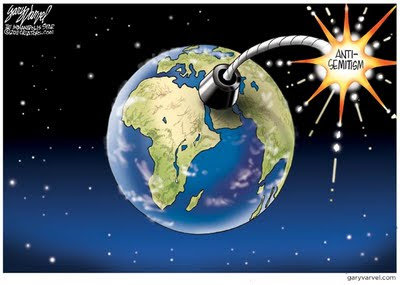 The people who have given us bagels and lox, potato latkes, and chicken soup, in addition to the Old Testament, Albert Einstein, and a list of Nobel Prize winners as long as your arm, are in for yet another interesting week.

Last week, Palestinian Chairman Mahmoud Abbas announced that the Palestinian Authority would not make a bid for statehood at the United Nations. That may have had something to do with massive pressure from the United States, Europe, and Saudi Arabia.

You can always trust a Palestinian’s word, right? Wrong. The next day, September 15, Abbas said the PA had changed its mind and would go to the UN Security Council to ask that it grant statehood to Palestine, admitting it as a full-fledged member.

He must have gotten a call from Turkey’s Prime Minister, Tayyip Erdogen, who has been spoiling for a war with Israel and has been urging the Arab League to join in. It might have something to do with Erdogen’s beef with Greece that announced that it will begin drilling for natural gas on Monday, September 19, in Cyprus’s offshore Aphrodite field. The Turkish air force has been watching the rig, owned by Houston-based Noble Energy, move from Israel to Cyprus.

This is probably as good a way to start World War Three as any. It has nothing to do with Israel and everything to do with the decades of bad blood between Greece and Turkey that includes a divided Cyprus.

Israel, founded in 1948, has been through five wars with its “neighbors”, endless terrorism and rocketing, and has been openly threatened with nuclear destruction by Iran.

The only thing I can guarantee you is that Israel will be blamed for whatever happens.

This week is also the occasion for the United Nations celebration of “Durban III.” It is an anti-Semitic, anti-Israel hate fest in which every other nation in the world that practices racism is ignored and Israel is identified as the lone offender; largely because the Palestinians have refused every offer of peace and statehood made to them.

To demonstrate what an obscenity the event is, one of the keynote speakers will be Mahmoud Ahmadinejad, Iran’s president and longtime Holocaust denier. A number of nations, including U.S., Canada and Great Britain, have already made it known they will not sit through another Ahmadinejad vituperation. Israel’s PM, Bibi Netanyahu, will be on hand to offer a response.

Anyone who still thinks the United Nations is about peace needs to pay closer attention. It is about being a global central power with authority over all the nations of the world. 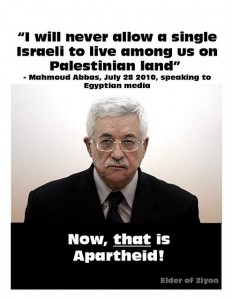 Durban III is about “racism.” So how does that square with a statement by Maen Arewikat, the PA Ambassador to the United States, who last week said that an independent Palestinian state would take steps to force Jews living in the West Bank to leave. In an interview with USA Today, he said it would be in the best interest of Israelis and Palestinians to “be separated.” The Nazis had a word for this, “Judenrein.”

Elliot Abrams, a former U.S. National Security Council officer, told USA Today that “No civilized country would act like this.”

The United States has already made it clear that it will veto a resolution for Palestinian statehood in the UN Security Council. So far the Palestinians have rejected the Oslo Accords and every other laborious diplomatic effort to get them to settle for peaceful coexistence. They could have had statehood after the UN partitioned the former British mandate that led to Israel’s establishment, but they rejected that option in favor of trying to drive the newly minted Israelis out of their ancestral homeland.

Jordan was among those nations that lost the 1967 war. The Israelis occupied the West Bank, a name Jordan gave to the ancient Israeli provinces of Judea and Samaria. The only reason Israel has not annexed the West Bank is that asserting such a claim would add a million Arabs to its population, none of whom have any love for Israel. Meanwhile, over the years, Israeli “settlements” have grown up on the West Bank.

The turmoil of the “Arab spring” has altered the cold peace that had existed between Egypt and Israel. The Israeli embassy in Cairo was attacked last week and the Israelis withdrew its staff. How many times do the Egyptians have to be defeated in war before they conclude it’s a bad idea?

The Palestinian demands have Jordon on alert as well. Jordan doesn’t want to have to absorb more Palestinian refugees into its population, thus making them a majority of the Hashemite kingdom created by the British after World War One. They tried to overthrow the former king once and he drove them into Lebanon.

The Syrian despot is busy crushing a revolution. Lebanon which used to belong to the Lebanese is now controlled by Hezbollah, a Palestinian organization backed by Iran and sworn enemies of Israel.

And how do the Palestinians have a state when the Palestinian Authority and Hamas, an Iranian-backed group located in Gaza, are at each other’s throat? If it is possible, Hamas hates Israel more than the PA.

The Palestinian dilemma is that they cannot get along with each other and no other nation in the region wants to have anything to do with them.

What will happen at the United Nations this week?

What will happen if Turkey decides to attack the oil rig off the Grecian part of Cyprus?

What will happen when the Israelis who have a defense pact with the Greeks respond?

How does NATO deal with two of its member nations going to war? What affect will this have on its role in the liberation of Libya?

It’s tough enough for the Israelis and Jews around the world to deal with the growing anti-Semitism that has been spread and nurtured by Muslims, but this irrational hatred, the well spring of the Holocaust, could set off a series of events initiated by such hatred.

Having destroyed the World Trade Center towers ten years ago, World War Three would be Islam’s gift to the world.

Mr Caruba,
Thank you for a great article...(again and every time)
I wonder....
would we face the same Armageddon if our POTUS has been someone other than obama ?
I fear you are right, and Israel will be for its very survival before 2012 election...
Islam has never placed one of its own in the White House!!!!

"an independent Palestinian state would take steps to force Jews living in the West Bank to leave."

You can be 1000% sure that just about ALL Arabs with Israeli IDs will NOT agree to leave a country that as a democracy offers them chances they never get in any of their own 'home turfs'.

Food packages might be welcome...because we have NO intention of disappearing fast.

sz, jerusalem - in the eye of the storm.

Aside from praying that "Masada shall not fall again" is indeed true and correct, I often wonder at our own shortage of Dayans and Netanyahus.