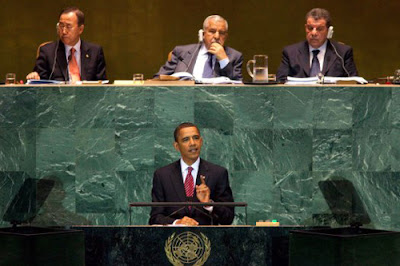 “Peace is more than just the absence of war.”

“So let there be no doubt…”

“We stand at a crossroads of history.”

“There is no excuse for inaction.”

Fewer people at home and around the world are paying any attention when Barack Obama speaks. He has become President Cliché. We were all told what a great speech-maker he was and now nobody wants to listen anymore.

Ironically, in his speech to the United Nations on Wednesday, September 21, he actually said some interesting things. Too bad none of the other leaders of nations care what he has to say. At home, his popularity and approval ratings in the polls continue to plummet to new depths and to set new records for the lack thereof.

In truth, this is not good for the world or the nation. The job of President is all about leadership coupled to effective policies that address problems. In fairness, Obama arrived in the Oval Office with some of the worst problems any president has faced in the modern era. Like his predecessor, on whom he blamed everything, he continued to throw money at the financial crisis, managing to run up the nation’s debt to a historic level. Obama's economic advisors dusted off the failed policies of the New Deal and tried again. They have not worked.

The problems not only did not go away, they got worse.

The Middle East has seen the “Arab spring” in which a number of dictators were overthrown and that seems hopeful except for the fact that radical Islam is the solution that many of those same nations are likely to embrace. It doesn’t help that the U.S. President has famously demonstrated a “tilt” toward Islam as it continues to foment conflict.

The United Nations speech was a long wish list, pasted together with a lot of platitudes about how the UN has played a role in warding off World War Three. That was largely avoided because the U.S. has a couple of warehouses full of nuclear weapons and had maintained the greatest military the world had ever seen. We’re still here. The Soviet Union isn’t. Most U.S. presidents since the end of World War Two wanted to see the world abandon nuclear weapons. It didn’t. The club just kept getting bigger with China, North Korea, Pakistan, and India. Now Iran wants them as well.

The Soviet leaders weren't crazy. The Iranian ayatollahs and mullahs are.

Obama cited the UN founding Charter that called on nations to “unite our strength to maintain international peace and security.” In reality, it has always been the United States who did the heavy lifting. We fought the North Koreans and Chinese to protect South Korea. We sent arms to Israel when it was repeatedly attacked. We detoured into Vietnam and took a shellacking. After 9/11 we drove the Taliban and al Qaeda out of Afghanistan and we organized allies to remove Iraq’s dictator, Saddam Hussein. Most recently, we got NATO to put an end to Gaddaffi’s reign of terror.

The problem Obama has discovered is that the United Nations is composed of many of the worst dictatorships and oppressive regimes on Earth. It is an utterly corrupt institution. It will not prevent World War Three if the U.S. leaves and a large number of Americans want us to leave.

“Peace is hard. Peace is hard. Progress can be reversed. Prosperity comes slowly. Societies can split apart.” Aside from the yawning banality of this pronouncement, the President’s learning curve about the reality of life on planet Earth has been a tough one. Still, he did condemn Syria’s dictator who has been killing that nation’s people, but could not resist showing off his Islamic credentials by saying many of the victims occurred "during the holy time of Ramadan.”

Obama has discovered what presidents since the days of Harry Truman have discovered. That Palestine is not a nation and the Palestinians are a horrid group of people who refuse to live in peace with Israel. “The Palestinian people deserve a state of their own,” said the President. Guess what? The Israelis agree, but cannot get their Mamoud Abbas of the Palestinian Authority to actually agree that Israel has a right to exist. Or Hamas to stop lobbing rockets into southern Israel.

In case anyone was actually listening, Obama repeated what every prior President has said, “America’s commitment to Israel’s security is unshakeable. Our friendship with Israel is deep and enduring”. After spending the last two and a half years demonstrating his contempt for Israel, this comes as a real surprise and further proof that Obama will say anything to get reelected.

And then he ruined it all by saying, “To preserve our planet, we must not put off action that climate change demands. We have to tap the power of science to save those resources that are scarce. And together we must continue our work to build on the progress made in Copenhagen and Cancun.”

The major fuels of the modern world are not scarce. We live above an ocean of oil. There is enough coal in America alone to keep the lights on here for centuries. Tapping the sun and wind has proved to be a huge waste of money for two of the least productive ways to provide energy. Copenhagen and Cancun, the site of two UN climate change conferences were total failures.

President Cliché closed out saying—again—“Peace is hard, but we know it is possible. So, together, let us be resolved to see that it is defined by our hopes and not our fears.”

Our fears are what sustain peace. It is why every nation is armed to the teeth.

Obama is a national embarrassment. And he wants four more years in office.

“Peace is more than just the absence of war.” - correct me if I'm wrong Alan, but didn't he plagerise this from a Reagan speech??

@Lime Lite: I doubt that Obama has had an original thought since studying the Koran in Indonesia and Saul Alinsky in Chicago.

You refer to him as "President Cliche" because *President dumber than a bag of dirt* was already taken??

@TexasFred:
Yeah, that and "dumber than a box of rocks", too!

He gave a speech? Wow...I wonder how many noticed?

@Rich: As you know, I never miss a chance to hear our Great Leader speak. NOT!

I did print out his speech to see what was in it. NOT MUCH!