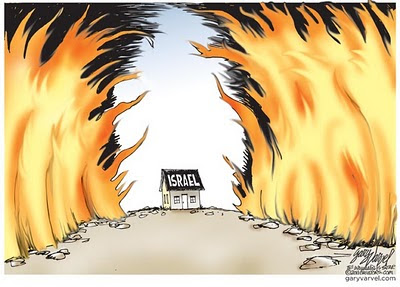 I was eleven years old when Israel declared its independence and sovereignty in 1948 with the blessing of the United Nations. World War Two and the Holocaust were over barely three years and many of Europe’s Jews needed a state of their own to rebuild their lives. Jews from throughout the Middle East were forced to flee nations in which they had lived for centuries. Over time Israel would absorb Russian Jews and others from around the world.

Egypt, Jordan, Syria and Lebanon attacked Israel days after its formal establishment. They were defeated. They would attack again in 1967 and 1973. In the course of these wars, the Arabs that had been living in Palestine, as Israel was known due to the post World War One British mandate, fled or were displaced.

They would become the world’s oldest refugee group and the only one to which a UN agency would be solely devoted, absorbing U.S. and other funding to maintain their status as opposed to helping them assimilate into neighboring Arab nations.

The Zionists, mostly secular and mostly socialist Jews from Europe and Russia who had come to Palestine earlier to prepare the path to statehood were rather surprised to find so many Arabs living there. At the time, Palestinians regarded themselves mostly as people living in southern Syria. Others were Bedouin. They were not “Palestinians”, nor had there ever been a Palestinian state.

Debating what the Israelis should do regarding the Palestinians has become a constant topic of U.S. foreign policy as well as that of most nations. It is, however, a debate that can only be decided by the Israelis and Palestinians and it is a cliché to say that one cannot achieve peace with someone who repeatedly says they want to kill you.

I have written about Israel over the years and maintained that it had a historic right to the land. After more than sixty years of ceaseless jihad—happening still—I have come to regard Palestinians as (1) intractably intent on driving out the Jews and (2) and incapable of establishing a state of their own.

After reading Hirsh Goodman’s new book, “The Anatomy of Israel’s Survival”, it has made me realize the terrible choices Israel faces. The problem that confronted the original settlers of Israel still challenges its existence. Resolving the issue of the Palestinians says Goodman must be recognized IF it is at all possible.

As much as I hated and rejected the term “occupier” as applied to Israel the truth is that it has been an occupier of the West Bank as the result of wars waged against its right to exist, but an occupier nonetheless. That said, the Palestinians have always refused to accept any peace terms offered, as often as not greeting them with terror campaigns directed against Israel.

Hirsh is a senior research associate at the Institute for National Security at Tel Aviv University. Between 1986 and 1989 he was the strategic fellow at the Washington Institute for Near East Policy. Born in South Africa in 1946, his family immigrated to Israel in 1965 where he has lived in Jerusalem. He’s been a journalist and, as such, has had a front row seat on the politics, the wars, the intifadas, and all other aspects of life in Israel.

The Israel he describes is one with a parliamentary government that is divided by far too many political parties, each representing competing views and agendas, and largely dysfunctional except in the unifying threat of an attack. It is a very small nation; its population largely concentrated in its major cities.

In a decade the Arabs will outnumber the Jews of Israel. Hirsh's data, however, is subject to challenges. (See end note)

It is demography, the study of population increases and declines that poses a greater challenge to the future of Israel than even hostile neighbor states. It is increasingly essential to establish peace with the Palestinian Authority to provide Israel’s Arabs with a nation of their own, though many who are already Israeli citizens will likely choose to remain citizens in the only Middle Eastern nation to offer them freedoms found in no other.

Hamas in Gaza, hostile even to the PA, is a problem that will have to be dealt with later.

Hirsh puts it bluntly. “Can Israel survive? Of course it can. The question is what kind of Israel it will be and what kind of neighbors it might enjoy. How Israel tackles the internal issues of the Hareidim (ultra orthodox) and the Israeli Arabs is important, even critical.”

“But even more important, the nature of Israeli survival depends on whether it remains an occupier or a tyrannical overlord. In continued occupation lies the deepening of internal dissent between the settlers and the rest of Israel, between the Right and the left, those who claim to speak in the name of God and the rest of us. Occupation will lead to the erosion of Israel’s moral fiber.”

And Hirsh knows that “Israel is not totally the master of its own destiny. It cannot make peace by itself. It cannot alone influence, let alone control, what happens in the region.”

What is happening is the widespread movement of Arabs to rid themselves of the dictators that have run nations from the Maghreb nations where Africa meets the Mediterranean, Tunisia, Libya and Egypt, and others such as Syria’s Assad and even some Gulf nations like Bahrain.

How the Middle East looks after the dust settles is anyone’s guess. If history is any guide, these nations will simply replace old despots with new ones.

So long as the Palestine issue exists it conveniently provides Israel’s neighbors and others the excuse to condemn it. Until the election of President Barack Hussein Obama, the United States had always been a steadfast ally, but he has undermined that long relationship.

Thus Israel, a pariah among nations with far worse records in war, peace and human rights faces some terrible choices. One choice, its right to self defense and to exist as Jewish state is non-negotiable.

http://www.theettingerreport.com/Demographic-Scare.aspx
Mr. Hirsh's data regarding Israel's demographic makeup is challenged by others with alternative data. -- AC
Posted by Alan Caruba at 7:05 AM

"I will bless those who bless you, and whoever curses you I will curse; and all peoples on earth will be blessed through you." --Genesis 12:3 NIV.

We had better remember who we are for lest we end up like the rest of the heathens.

I have followed this process from its beginning in 1948 when I was 12 years old. It was like seeing in reality a grand heroic tale of ancient myth.

Those Arabs who fled the new nation of Israel (now referred to as "Palestinians") were told to do so by Arab leaders, who promised that after the short war of annihilation of the Jewish people, those who fled would be given the real and personal property the Jewish people had possessed.

Having made the mistake of listening to the idiot president Jimmy Carter, and believing his lie that they would no longer have to look out for their own interests, as America would do that for them, Israel has indeed only terrible choices now.

That Israel survived the initial Arab-Israel war was no less than a miracle. I can only hope that another virtual miracle will occur.

May Israel prevail, against great odds, once again. (I am not Jewish, but I greatly admire those in Israel who are)