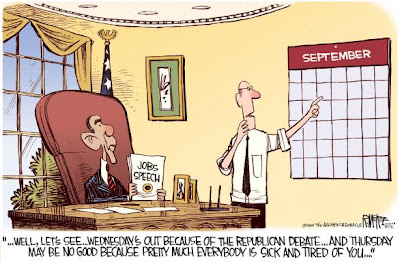 Not only is President Obama’s forthcoming “jobs” speech a self-inflicted embarrassment when he was told he could not deliver it to a joint session of Congress on Wednesday—the first time any President was refused the day and time of his choosing—but it is essentially D.O.A.; dead on arrival.

Every one who has had to endure the last two and a half years of Barack Hussein Obama knows he has no idea how to “create” any jobs other than government jobs or how to cut through the Gordian knot of Washington’s regulatory and taxation bureaucracy. For starters, since taking office his administration has accelerated regulations more than the entire two terms of the man he blames for his problems.

Obamacare has stalled hiring as businesses large and small wait for its repeal. Already repealed by a vote in the House of Representatives, if the November 2012 elections give the nation a Republican Senate and President, this huge burden will be removed. On September 1, Wayne Crews, a vice president of the Competitive Enterprise Institute and nationally recognized authority on federal regulations, wrote a commentary in The Washington Times in which he said, “Mr. Obama’s slate of yet more regulations is beyond merely alarming in this tense environment. The Federal Register already stands at more than 54,000 pages so far this year.”

Crews especially cited the cesspool of over-regulation, the Environmental Protection Agency, for its proposed “Maximum Achievable Control Technology” pollutant control mandate for fossil-fuel utilities, for cement plants and boilers widely in hospital and factor use, for “dust” that is stirred up during normal farming, and for power-plant coal ash.

Obama just asked the insane EPA to withdrawal its proposed ozone rules that Steve Milloy of JunkScience.com says “would provide no health benefits, but cost $1 trillion per year in compliance, and kill 7.4 million jobs by 2020.”

Obama has also become well known for his advocacy of “green jobs” and, one day after Wayne Crews was lamenting the regulation explosion, Stephen Moore was writing in The Wall Street Journal that “President Obama is expected to seek another $250 billion or so in new stimulus funds next week, with plenty of money for clean energy and the creation of so-called green jobs.”

Future economists will calculate how much money the Obama administration has wasted on the fantasies of wind and solar energy, but what we know for sure is he has utilized all the powers of government to ensure that access to the fossil fuels on which ours and every other economy worldwide is based is thwarted, slowed or punished.

Moore wrote of an Obama-appointed U.S. attorney who brought criminal charges against seven oil companies for “causing the deaths of 28 migratory birds found in oil waste pits.” No such charges have ever been levied against the owners of wind farms that routinely slice and dice hundreds, if not thousands, of birds and bats.

In terms of long-term unemployment, about 6.2 million workers have been unemployed for six months or more. Among them, 4.5 million have been jobless for a year or more. Unsurprisingly, the least educated are the hardest hits. Since January 2010, the Center says there has been a net loss of 500,000 jobs for people with high school diplomas or less, but a net gain of 1.2 million jobs for college graduates. Unemployment among blacks and Hispanics is significantly higher than for whites.

His brain clogged with Marxist and Keynesian nonsense that puts government at the center of the economy, Obama’s Thursday speech will be a hodge-podge of failed programs, proposals to spend billions we don’t have, and a tinker-toy constructed of various tax credits and other efforts, none of which have worked since the day he took the oath of office.

Watch what the stock market does when it opens Friday morning. Then watch as businesses sit on what money they have, hire sparingly, and wait until Obama is gone as of January 20, 2013.

Lets not forget almost every businesses he has spoken at or for has gone belly up in one way, shape or form.

Finding it impossible to watch the full episode of our President in action, I have resorted to listening only. My defense mechanisms allow me to pretend I'm H.V. Kaltenborn, a broadcaster who gave it both barrels when I was a small boy. This way my TV is safe from Elvis'
mode of censorship.

I pay no attention at all to what the Confused In Charge has to say.

This boondoggle will cost the Treasury of the US 300 billion dollars, and go into the purses of the cronies of "O".

A tax cut equal to this amount would have allowed Americans to spend the money for their own purposes, and resulted in a good many jobs, doing wonders for the economy, and would not have cost the Treasury more.

I cannot watch the president. I get sick to my stomach knowing that we as a nation have somehow been deluded into thinking that this undereducated puppet has the eyes of the world. With that, we are thought of as stupid and worse. I fear that Gov. Perry will have the same effect on me as he doesn't stand for Constitutional government, but government by, for and bought by the PTBs. A Democrat, now Republican! How did we lose our discernment? Public schools? Ooops, another post perhaps.

The way of politics is strange indeed. Reagan had what he called his "Kitchen Cabinet", who were brillant advisers. I met a couple, and while I could say "we chatted", in fact I listened closely. One put too much faith in the way of planning, which has been far over done, but the others were worth listening to. Smart men.

Give Perry the equivalent set of advisers, and Perry could easily "sell" the program to most Americans, and carry it through.

The way I see it, Rick Perry is our only chance.