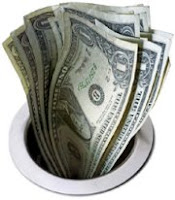 A visit on Tuesday morning to the websites of various federal departments reveals that this administration can find an excuse to spend millions on anything. Here’s a quick tour.

In the wake of the Solyndra scandal in which taxpayers were, in the words of Investor Business Daily, “put on the hook for at least the first $75 million if the company should default and with “a minimum of five green firms going bankrupt” the U.S. Department of Energy, on September 13, announced a $1.2 billion loan guarantee to Mojave Solar LLC for the development of the Mojave Solar Project.

On the same day, the U.S. Department of Transportation (DOT) announced a $32.5 million grant “to finalize expansion plan of Boston’s South Station” for the purpose of expanding and enhancing the historic station on the grounds that it estimates a “50 percent increase in high-speed intercity passenger rail travel in the coming years.” And we all know how accurate estimates are, eh?

Three days later, the DOT provided $22 million to the Maryland Department of Transportation for a study of replacement options for the Susquehanna River Bridge on Amtrak’s Northeast Corridor from Boston to Washington, D.C. Why not spend the money on actually replacing the bridge? On September 19, DOT awarded $25 million to the city of Charlotte, N.C. for a streetcar line “to improve access to jobs, housing, and schools.” Why money from other States should gift Charlotte with a streetcar line when the nation has a $14 trillion debt might have something to do with the fact that the Democratic Party National Convention will be held there in 2012.

In the midst of a recession that officially does not exist, the U.S. Department of Housing and Urban Affairs (HUD), on September 15, announced $93 million in grants to 39 local projects “to conduct a wide range of activities intended to protect children and families from potentially dangerous lead-based paint and other home health and safety hazards.” HUD estimates there are “nearly 7,000 high-risk homes” because “providing healthy and safe homes for families and children is a priority.” Keep in mind that lead-based paint was banned for residential use in 1978, more than three decades ago.

On September 15, the U.S. Department of Health & Human Services announced awards totaling $10 million “to aid 129 organizations across the country that would like to become community health centers. The funds came from the Affordable Care Act, but at the same time Obamacare cuts billions from Medicare, reducing payments to hospitals and to individual physicians providing care to America’s growing population of the elderly. Go figure.

At the Department of Commerce, on August 30, they were celebrating a $2.9 million “investment to expand access to capital for area small businesses and entrepreneurs.” One of them was a new $75.6 million Convention Complex in Cedar Rapids, Iowa that broke ground that day and we all know how many conventions Cedar Rapids hosts.

On September 14, the Department of Agriculture announced that taxpayers are now on the hook for loans to 27 rural electric cooperative utilities. DOA made $603 million in loans to help electric utilities "upgrade, expand, maintain and replace rural America’s electric infrastructure."

This is the same administration whose Environmental Protection Agency is waging war on coal-fired utilities and mining (coal provides 50% of all electricity in America). On September 16, USDA announced funding for more than 500 projects to boost renewable energy production (wind and solar) despite the fact that this represents just over 2% of all the electricity produced and companies producing solar panels are declaring bankruptcy on a weekly basis these days.

Secretary Tom Vilsack also noted that USDA Rural Development “is providing $35 million to finance smart grid technologies such as advanced metering infrastructure.” The problem with smart grids is that, if the utility thinks you’re using too much electricity to cool your home or business in the heat of summer, it can reduce the amount you receive. Same goes for warming it in the winter.

Not to be outdone, the U.S. Department of the Interior announced in late August that it was making more than $53 million in grants to 17 states “to support conservation planning and acquisition of vital habitat for threatened and endangered fish, wildlife, and plants.” The Endangered Species Act has been one of the greatest failures in U.S. history and responsible for thwarting billions in development. This money is intended to remove yet more landmass from development, all in the name of obscure species and plants.

On September 14 the Department of Justice announced grants totaling $118.4 million to “enhance public safety in Indian Country.” The money went to tribal governments. Apparently the Apaches are on the warpath again. Over the last two years, DOJ spent $121 million on conferences.

This doesn’t even take into consideration the money flowing from the Departments of Defense, Education, Veteran Affairs, and Homeland Security. It is in fact just a quick overview of the funding the Obama administration is spending while 14 million Americans are trying to find a job and others struggle to pay their mortgage or put their children through college.

It is a look at a government grown so large and so profligate that its credit rating was recently reduced and our President is on the campaign trail telling Americans they must pay more taxes despite the fact that 40% pay no taxes and “millionaires and billionaires” pay 70% of taxes collected. It’s the same government that wants to impose a 1% tax on all banking transactions, the deposits and withdrawals of your money!

As an ID-carrying worker for a to-be-named-after-retirement government agency, I must say that the problem is worse than you CAN imagine. Mission creep to protect the rice bowls of politically-appointed management seems to be the root of most evils.
The number of Hopey McChange supporters in my agency is beyond belief, it beggars the imagination. Change is at hand. The gravy train is slowing.

@The Old Man: Thanks for your input. I forgot to mention that all the money these departments is spending was authorized by Congress!