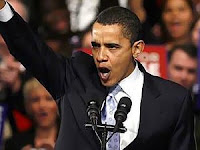 The most interesting thing happening in the world of politics and finance today is the way Barack Hussein Obama continues to lose traction every time he gives a speech.

When longtime, staunch supporters of Obama such as MSNBC’s Chris Matthews look and sound betrayed, it is clear that even Obama’s liberal base is in disarray. Matthews, presumably a seasoned political observer, had poured all his faith into Obama, believed in hope and change, and Obama only delivered a huge national debt, the first downgrade of the nation’s triple-A credit rating, massive unemployment, and the sad repetition of failed solutions.

Conservative commentators were openly disdainful of Obama’s use of a joint session of Congress as a stage for a purely political speech, but it was the public as always that had the last word.

Obama’s first speech to a joint session of Congress in February 2009 garnered 52.4 million viewers. By January 2010, the State of the Union speech drew 48 million and the 2011 SOTU attracted only 42.8 million.

His “jobs” speech was watched by 31.5 million. On the East Coast it was 7 PM, but in California it was 4 PM. Maybe it was just the time difference? Or maybe people have decided that listening to Barack Hussein Obama is just a great waste of time, no matter what the hour may be.

I know that the conventional political wisdom is that Obama has 14 months to go and that he’s a great campaigner, but to my eye his audiences following the “jobs” speech were composed mostly of union members or the very young.

Among the military, whenever he addresses them, the silence is palpable. Recall the sullen response he got at West Point when he announced his Afghanistan strategy, if one can even call it that.

There is a hard core of perhaps 20% who love Obama to the exclusion of his record of failure to focus on the economy. Others, though, from the black and Hispanic base are beginning to look for the exit. The Black Caucus is unhappy. Hispanics are unimpressed.

The race card is being played. Class warfare is being encouraged. These are the tools of a demagogue.

Obama, though, is convinced that if he just talks enough he can change opinion; thinks he is the master salesman, the ultimate campaigner. What he does not see, nor sense, is the derision with which his message is being received. 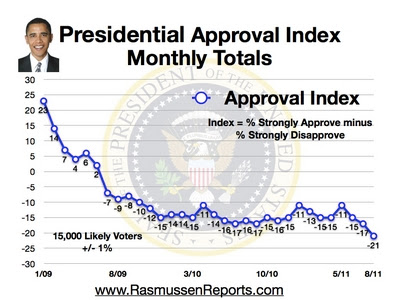 The public has had two and a half years to take his measure and while he cannot be fired until November 2012 and will not leave until January 2013, he is pure poison to any hope of economic recovery. He has the reverse Midis touch; whatever he touches turns to poop.

It was almost comical that the solar panel company he touted as the green jobs wave the future, Solyndra, received millions from the government, filed bankruptcy, and got a visit from the FBI that seized its records and computers. When it comes to picking winners and losers, Obama always manages pick a loser and stick the public with the bill.

Meanwhile his administration seeks to block Boeing from creating new jobs and raids Gibson guitars for using the same wood as every other guitar-maker in the nation. His administration shipped guns to the drug cartels in Mexico for reasons beyond comprehension. His Attorney General pleads ignorance.

His rhythmic phrase, “Pass this bill”, repeated seventeen times in the course of his speech to Congress ignored the fact that there literally is no bill. Out on the campaign trail a day or so later he was still saying it.

Obama is intoxicated with the sound of his voice, his staccato delivery, his hand gestures, and all the other elements of oratory upon which he has depended for his rise to the top. He just hasn’t figured out that it is not what you say, nor how you say it, that matters. What matters is the result of his policies. They don’t work.

Obama matters less and less in national affairs except for the destruction he and his minions continue to wreak upon a nation struggling to come back from a major financial crisis, fearful of his flawed judgment, not hiring, not spending, and waiting impatiently for November 2012 to arrive.

The biggest FAILURE in American presidential history went through the motions and did his very best to convince Americans that he actually cares. The ONLY thing Obama cares about is HIS job, America is NOT his concern!

And I say again, get ready to see Obama attempt to RULE, yes, I said RULE, via Presidential Executive Order...

We are on the verge of an Obama dictatorship, Obama is a trapped rat, he is cornered, and that makes him a very dangerous RAT!

I think Obama's plan from the beginning of his neo-Communist Regime in 2009 was to destroy capitalism in the USA, and I'd say he's been pretty darn successful so far.

The presidential speech making was always an Orwellian smoke screen to hide what his Regime is doing daily to advance the cause of Communism in America. I don't think his many presidential speeches were ever designed to win the hearts and minds of the vast majority of Americans, but instead crafted to encourage the hardcore 20% Leftists who hate the Republic and can read between the lines.

Did you think he would actually come out and tell the truth about his endgame this close to the destruction of capitalism in America in the next 14 months?

Why if he did something stupid like that even his boot licking Republican House might impeach him and his Democrat lackeys in the Senate remove him from office.

Obama may not be a rocket scientist, but the union thug at heart is smart enough not to desire to be the defendant in the first presidential treason trial facing the death penalty.

Reverend Wright's rant was correct! America has been damned. A fool has been thrust upon us as president. Foolish non-leaders like Reid, Pelosi, Frank, Waters, Dodd and others have perpetuated this damnation. If the Congressional Conservative Right does not stand up to this idiot NOW it will be like we are in a burning building and the fire department will not arrive until January 2013.

We have a long hard climb ahead, if we are to set the Free Market back on its rails and let Capitalism work again. It's not just ObamaCare, everything The Impostor attempts is designed to weaken Small Business and its entrepreneurs from succeeding. Reverse Midas Touch is too cute a term to really convey when the KAKA hits the fan. Everything he does is wrong and dangerous.