Negotiating with Hostage Takers and Murderers 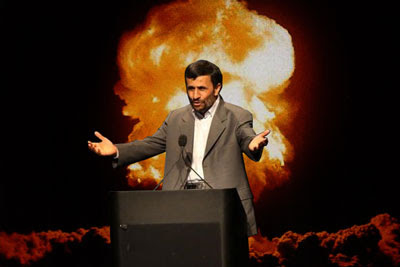 We’re all happy to see the return of Americans, Shane Bauer and Joshua Fattal after two years captivity in Iran. While hiking in the Kurdish region of Iraq, they, along with Sarah Shourd, were captured by soldiers at gunpoint, detained, tried, and imprisoned for espionage. Ms. Shourd was released a year ago.

Iran has been taking Americans and others hostage for a very long time, either directly or through proxy terrorist groups. They have created a new paradigm of war-without-war in which troops do not take to the field of battle against Iran, but rather diplomats who must negotiate the release of whomever the hostages might be.

In domestic situations like that Americans are accustomed to seeing SWAT teams used when all else fails and one might compare the SEAL team assassination of Osama bin Laden to the conclusion of the military attack we now call 9/11.

Iran, however, has committed criminal acts that break every international law and yet its president is still welcomed to take the podium of the United Nations. More on his most recent speech, the seventh year he has spewed his insane mixture of threats and a bizarre Islamic interpretation of Armageddon below.

Diplomats are understood to be protected against the usual acts of war in order that they may facilitate a solution. When that doesn’t occur, they are allowed to leave the hostile nation, but on November 4, 1979 Iranian “students” seized control of the American embassy in Tehran and took 52 Americans hostage for 444 days until January 20, 1980.

It ended Jimmy Carter’s one term presidency. An aborted military action was made to secure their release.

American reluctance to even threaten war has left the impression of impotence. When Iran announces it has developed its own nuclear weapons, it will put the whole world at risk. They won’t need ballistic missiles to deliver them. Just a freighter with such a weapon in any U.S. port.

With astonishing impunity, the Iranians have seized British citizens as well; four young crew members of a racing yacht off the coast of Bahrain, along with a radio announcer along for the ride. In March 2007 they took fifteen Royal Navy personnel hostage and held them for thirteen days, claiming they had been in Iranian waters; a typical lie.

Israeli Prime Minister, Benyamin Netanyahu, ended his speech to the UN General Assembly by reminding its members that Gilad Shalit, a member of its Defense force, had been held hostage in Gaza by Iran’s proxy, Hamas, after having been captured on June 26, 2005. He has been refused visits by the International Committee of the Red Cross. Shalit holds dual French and Israel citizenship.

Iran is led by gangsters who murder and kidnap people with utter disregard for any laws. Its own population is held hostage by Ayatollah Ali Khamenei, President Mahmoud Ahmadinejad and the machinery of terror that control their lives.

When Iranians took to the streets to protest the election of Ahmadinejad, they were gunned down in the streets of Tehran while others were imprisoned. President Obama’s response at the time was that the U.S. should not “meddle” in Iranian affairs, though he would earlier call for the overthrow of Egypt’s Mubarack and later seek to engage NATO in the overthrow of Libya’s dictator.

On September 23, Ahmadinejad took the podium of the United Nations, beginning his speech by giving thanks to “Almighty Allah” who, he said, urged Muslims to show “compassion to others, generosity, justice-seeking, and having integrity both in words and deeds.”

After giving an account of the ills of the world, he then proceeded to list a litany of crimes against humanity by the West in general and the United States and Israel in particular, citing the dropping of atomic bombs to end World War Two’s conflict with Japan and Israel’s more than sixty years of existence, to name just a few. He neglected to mention any of Iran’s crimes.

As he had in the past, Ahmadinejad closed his speech referencing an Iranian belief in the return of the Twelfth Imam, without mentioning the belief that his return can only be brought about by an Iranian Islamic belief in a worldwide Armageddon of death and destruction in “a future that will be built when humanity initiates to tread the path of the divine prophets and the righteous under the leadership of Imam al-Mahdi, the Ultimate Savior of mankind and the inheritor of all divine messengers and leaders and to the pure generations of the Great Prophet.”

“He will come alongside with Jesus Christ to lead the freedom and justice lovers to eradicate tyranny and discrimination, and promote knowledge, peace, justice, freedom, and love across the world. He will present to every single individual all the beauties of the world and all good things which bring happiness for humankind.”

Meanwhile, the world stands by and stands back as the Iranian fanatically religious oligarchy pursues the acquisition of nuclear weapons with which to bring about the return of Imam al-Mahdi.

Attn AD: No I have not posted your idiotic comment. Suffice to say, the text regarding the use of a SWAT team says "when all else fails." Precisely what you sought to correct me about.

Do yourself a favor and just stop visiting this blog or trying to post a comment here.

@Alan - the Twelfth Imam truthers believe that he can only return when there is widespread war, destruction, suffering and terror on earth - the redder the soil soaked in blood all the betterfor their hero to make his appearance. This guy is nuts and how anyone can give him airtime is beyond me. What's troubling is that he has Venezuela's useful idiot supporting him. Therefore, you have the BRIC countries plus South Africa also clapping him on. It may not have been a lost cause with a strong America; but you have your weakling in the WH. Has anyone noticed that the Arab "Spring" happened on BO's watch? That's how much they don't fear or respect the USA anymore!