Racism? Depends Who's Talking About It 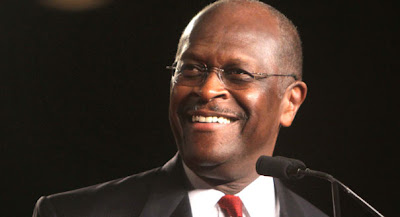 Recently I stopped by the home of a friend of some forty years to wish him happy birthday. He is a PhD with a long career in the field of human relations. And he is an African-American. As we sat together discussing our lives and current events, I was surprised to hear his wife declare that the only reason everyone is criticizing President Obama was “racism.”

I suggested that even the Congressional Black Caucus was criticizing the President. She dismissed that. Perhaps it has to do with his handling of the economy? No, it was racism, she said. I had to wonder how many other black Americans felt that way and, frankly, I do not have the answer to that question.

In sharp contrast, the news on Saturday, September 24, was that Herman Cain, a candidate for the Republican nomination, had won a straw vote at CPAC Florida, scoring 37.1% over distant runners-up, Rick Perry at 15.4# and Mitt Romney at 14%. Did I mention that Cain is the only black man running against eight white candidates? Or that Florida elected Allen West to the House from a district that is predominantly white?

So, someone, please tell me where is this racism that my friend’s wife perceived? And has President Obama’s race been a help or hindrance? When he was elected the 44th President of the United States in 2008, Adam Nagourney of The New York Times wrote that his election swept away “the last racial barrier in American politics with ease…” At the time, Nagourney noted that “Initial signs were that Mr. Obama benefited from a large turnout of voters, but particularly among blacks.”

ABC News reported similar results. In an interview with Andy Kohut, president of the Pew Research Center that had published similar approval ratings he said “Obama is not being judged through the prism of race by white voters. It’s because ‘Hey, I don’t like what he’s doing.’”

It is perfectly understandable that black Americans would want to support the President, but is there a blind spot regarding why his approval ratings are dropping even among blacks? In an interview on CNN with Piers Morgan, the Oscar-winning actor, Morgan Freeman, was asked if Obama had helped the process of eradicating racism or had he made it worse. “Made it worse,” replied Freeman who blamed the “Tea Partiers”, calling Obama’s present problems “a racist thing.”

If that were true, why in late August did an article in Politico report that “prominent black leaders…have turned up the heat on the nation’s first African-American president”? He is widely seen as indifferent to black concerns, but their concern is also about the black voter turnout in 2012.

The Black Congressional Caucus has been increasingly vocal regarding their unhappiness with President Obama. In remarks at its annual Phoenix Awards dinner on September 24, the President said, “I expect all of you to march with me and press on. Take off your slippers, put on your marching shoes. Stop complaining, stop grumbling, (and) stop crying.” It is hard to imagine a white President saying such things as Obama strove to rally his audience.

For anyone familiar with the history of race and politics in America, the loyalty of black Americans to the Democratic Party is astonishing. During the years of FDR’s New Deal, civil rights for blacks were not on the agenda. Even the years following World War Two when two million blacks served in a segregated military, the Democratic Party—especially in the “solid South”—opposed any civil rights legislation. It took the assassination of President Kennedy in 1963 to finally get a bill passed.

For my part, I think Obama has done incalculable harm to any current or future black candidate for the presidency. He had an opportunity to address the nation’s problems of unemployment and debt, and he gave all Americans, black, Hispanic, and white, more unemployment and debt. It’s unfair, but black candidates will likely have to work twice as hard to overcome his legacy.

I would imagine there is some racism concerning Obama but I do not think it is even close to being anything to worry about. I think Obama`s biggest problem is what comes out of his own mouth and the more he talks and reasonable people listen, the deeper the hole will be in when he realizes his problem. He still thinks he can walk on water so to speak but he is actually sinking quite rapidly.

It is certainly a shame that so many blacks think that everything is about racism. Once upon a while ago, there was significant racism which did keep blacks out of the good-paying jobs market, but that was mostly done away with a long time ago.

In 1947, Harry S Truman integrated our armed forces, and it worked out extremely well. I knew of a few whites from southern states who were fiercely racial, but not all that many.

The civil rights legislation of the 1960s severely damaged race relations because the legislation went way too far and resulted in severe reverse discrimination against whites, particularly white men.

Obama's problems are from his own ignorance and lack of experience, along with his hand-picked "Czars", who are either incompetent or largely hate America and all it stands for.

My concern is that liberals actually feel that anyone who does not agree with a black person in general, and Obama specifically, is being racist. At what point did liberals give up all pretense of independent thought?

ne of MY readers, a VERY White guy, read into that what you will, stated that Cain is going to vote Black issues over White issues simply because that is what *THEY* do...

Racism abounds on ALL sides...

"Why is it perfectly understandable" and not racist?