This Way to the Poorhouse 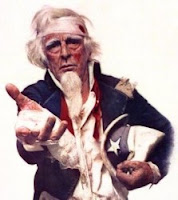 On Tuesday, September 13, Reuters news service reported “Number of poor hit record 46 million in 2010.” Another new record set by the Obama administration and a President who has been out campaigning to “Pass this jobs bill now.”

“The number of poor Americans in 2010,” Reuters reported, “was the largest in the 52 years the Census Bureau has been publishing poverty estimates.” Obama has the great misfortune of presiding over a government, some of whose agencies report just how bad a job he’s doing. Last month, we were informed that zero new jobs were created in August.

On the same day of the Reuters article, Douglas W. Elmendorf, the Director of the Congressional Budget Office (CBO) was on Capitol Hill, advising the new deficit super-committee to whom Congress has punted the job of reducing the obscene amount of money the federal government wastes every day.

If they don’t come up with a plan, cuts kick in automatically. This basically means that they have to decide what agencies and departments get protected. Otherwise the federal government gets a one-size-fits-all budget cut. That is as dumb a way to run the nation as one can imagine.

There was some fairly desultory media coverage of Elmendorf’s presentation. For most reporters it was just more of the same, but for the rest of us, it was a reasoned description of the utter disaster that faces the nation if a truly massive effort isn’t undertaken to slash government spending.

Aside from spending, there’s the problem of all those old codgers like me. “If current policies are continued in coming years,” Elmendorf said, “the aging of the population and the rising cost of health care will boost federal spending, as a share of the economy, well above the amount of revenues that the federal government has collected in the past.”

Social Security and Medicare have to be significantly reformed. They are bankrupting the nation because, in the words of Margaret Thatcher, “Sooner or later you run out of other people’s money.”

Reform, however, of any part of the federal budget is complicated by “the weakness of the economy and the large numbers of unemployed workers, empty houses, and underused factories and offices.”

Or to put it another way, we’re broke. We are seriously broke. We are $14.3 trillion broke in terms of the national debt. That’s about the same amount of the entire gross domestic product for a year.

We are not only broke, Elmendorf told the committee, “the economic growth for the remainder of this year and next is likely to be weaker than the agency anticipated—with growth in the vicinity of 1 ½ percent this year and around 2 ½ percent next year.” We need at least 3 percent to just break even.

Since both the Democrats and Republicans got us into this jam, it is highly doubtful the super-committee will do anything but dawdle long enough to let the automatic cuts kick in.

Meanwhile, the rest of the federal government is hemorrhaging money.

As this is being written, I received a news release from the U.S. Department of Housing and Urban Development that it has awarded “nearly $100 million to promote jobs, self-sufficiency, independent living for HUD-assisted housing developments.”

And something called the Renewable Energy and Energy Efficiency Advisory Committee is set to “present eleven recommendations to promote U.S. exports of renewable and efficiency technologies to federal officials.”

Folks at the Department of Commerce will be told that green energy and clean energy is the wave of the future. Did anyone tell them that Solyndra, the solar panel company that received a U.S. government loan of more than $500 million just filed for bankruptcy? Or that General Electric builds its wind turbines in China? Or that it shut down the last factory in America that manufactured incandescent light bulbs?

A week ago, the Competitive Enterprise Institute (CEI) released a ten-point plan to create jobs that has nothing to do with shoveling gobs of taxpayer money out the door to banks, housing developments, or wasting time discussing renewable energy.

Among its recommendations were the repeal of the financial “reform” laws, Dodd-Frank and Sarbanes-Oxley. Bank of America isn’t planning to cut 30,000 jobs because it has too little regulation, but too much bad regulation.

CEI urged that proposed or recently finalized federal environmental regulations that will force the closing of power plants and energy-intensive industrial plants be put on hold. The Institute urged the federal government to expedite environmental permitting of natural resource projects (coal, oil, natural gas) projects on federal, state and private lands. Ending taxpayer subsidies for wasteful, inefficient “green” jobs was yet another recommendation.

It’s not that CEI and the U.S. Chamber of Commerce, among other think tanks and trade associations haven’t been telling the Obama administration what needs to be done to energize the economy. It’s more like the administration either isn’t listening or doesn’t care or intends to deliberately put America further into bankruptcy.

Labels: Obama administration, US Debt, US Deficit, US economy

Poverty... I am not *poor*, but I'm not rich, not by ANY means, I am a retiree living on a fixed income, and my social security disability, and while the Obama clan travels the world, blows tons of money and vacations incessantly, guys like me haven't seen a cost of living raise in 2 years now...

How does it end?

And maybe a civil war if we are really unlucky...

Of course, the good times will return...

But few of us old timers will live to see it.

I don't see a civil war, as in the previous one, states against states, but I do see a good possibility of war between residents of large crowded cities and the rest of us, or even between poor and more wealthy areas within such cities.

Given my excellent health, I guess I could move back east and take up highway engineering again. After Irene and Lee, there is no end to the need for qualified civil engineers, would there ever be the money funded to pay for massive road reconstruction.

IMHO, what is coming will be far worse than the Great Depression was.