Save Us from Joe Biden 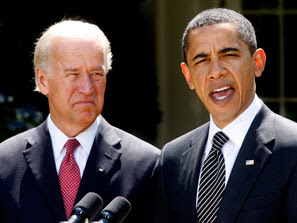 There is, I swear, an entire category on Google titled “Joe Biden is an idiot.” As further proof, there are collections of Joe Biden quotes.

Addressing a gathering of the House Democratic Caucus on February 6, 2009, shortly after he and the President were sworn into office, Biden said, “If we do everything right, if we do it with absolute certainty, there’s a 30% change we’re going to get it wrong.”

A growing majority of Americans has concluded that they got closer to 90% wrong, no matter what they did. The Obama administration is going to go into the history books as one of the worst the nation has ever endured.

That says a lot about Obama’s judgment because it was he who chose Biden to be his Vice President. Biden has turned out to be Obama’s alter ego and, we’re told, one of his most trusted advisors.

On October 12th, in Flint, Michigan, Biden actually said that there would be more rapes and murders if the current iteration of Obama’s jobs bill, yet another multi-billion dollar blunder, was not passed. Even a Democrat-controlled Senate would not pass it. In Flint this year, with no stimulus spending and 19 less stimulus police officers there are projected decreases in homicides of 42% and rapes of 52%.

It is worth pausing to keep in mind that, if Obama was to cease being President for any reason, Biden would become President. It is mind-boggling to think that this idiot could ascend to the office. If there was no other reason to defeat Obama in 2012, Joe Biden stands head and shoulders above all others.

How stupid is Joe Biden? Let me count the ways.

On October 23rd, in the course of a CNN interview, Biden said that nobody can say “that the stimulus did not create jobs.” Putting aside the fact that government does not create any other kind of jobs other than government jobs or make-work, temporary jobs, the most recent report on the stimulus by the Congressional Budget Office (CBO) calculated that the stimulus did create a maximum of two million jobs by the fourth quarter of 2011, but that at a cost of $412,500 per job!

The CNN interview draw attention from some elements of the mainstream media when, according to a CBS political analyst noted that Biden “left the door open to running for president in 2016, saying he would “make up my mind on that later” adding that he was physically and mentally prepared for the challenge. Physically maybe, but mentally he is one of the most clueless vice presidents since the days of Al Gore.

“When the stock market crashed,” Biden told Katie Couric, “Franklin D. Roosevelt got on television an didn’t just talk about, you know, the princes of greed. He said, ‘Look, here’s what happened.’” For the record, the market crashed in 1929 before Roosevelt was president and television did not exist except for a few experimental sets at the time.

Biden is famous for his gaffs, most famously for his comment, caught by the microphones, about the passage of Obamacare. “This is a big fuc*ing deal” during the signing ceremony on March 23, 2010. Since then, the House has voted to repeal the bill and it is headed to the Supreme Court after 26 States attorney generals challenged its constitutionality.

Biden is a buffoon, but worse than that, he has zero command of the facts and an alarming characteristic which he shares with Obama; he lies about everything all the time.

We can count on Biden, now that he and the president have hit the campaign trail, to say a lot of other stupid and false things, but we can also count on him putting audiences to sleep with his famed long-winded answers.

We must save America from Joe Biden for the same reason we must rid the nation of the worst president in its history.

It's odd, even a lot of conservatives confess that they like Joe Biden. Everybody loves a clown!

Are you familiar with a comic named Jeff Dunham? A ventriloquist??

He has a dummy named Walter.. I think Biden was the pattern for Walter...

Walter is smarter though...

Be careful what you wish for. It's been said that if Obama were to replace Biden with Hilarious, he'd be almost guaranteed a second term. My skin crawls just thinking about that ...

Guy, I don't think Obama will replace Biden or that Hillary would want to be on the ticket with a sure loser.

She looks very tired these days as it is.

Have you noticed how much weight Hillary has put on? She looked not only tired, but much heavier in the last few photos I've seen ...

Obama and Biden are the worst ever!!!And I hope all the trendsetters and new age voters are happy with the outcome!!!!!! Joe Biden is the biggest idiot that was ever and I meen ever was in office!!!! For the state of union speech he probably had to chug 5 hour energy drinks just to stay awake the moron!!!!!!!!!!!!!!!!