At War with Iran 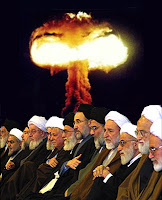 “State TV said President Assad's brother-in-law, Assef Shawkat, and Gen Dawoud Rajha, the defence minister were victims of a blast during a high level security meeting. The Interior minister was also injured. Gen Shawkat was the deputy defense minister and was among the most feared figures in Assad's inner circle. He is married to Assad's elder sister, Bushra.” – The Telegraph (UK) July 18, 2012

The best thing now for Syria would be a dead Bashar al-Assad and events are pointing toward that conclusion. The world has been watching the slaughter of Syrians by their own government as Bashar follows in his father’s footsteps.

Events dubbed the “Arab Spring” have forced dictators out of Tunisia, Libya, and Egypt, but left behind nations that are likely not much improved over their previous governments. Middle Eastern states are essentially groups of warring tribes and are divided by the schism between Sunnis and Shiites.

The motivation for these uprisings is the widespread poverty throughout the Middle East and the fact that much of the population is quite young. It is a volatile combination.

At this point, Bashar al-Assad and the minority Alawite tribe that supports him are concentrated on simply surviving. It is a civil war not unlike Libya’s. The earlier uprisings have inspired people to rid themselves of their dictators, but there has been no evidence that their replacements are in a mood to do anything but establish new governments to control the oil wealth that sustains much of the region.

For now, using the covert skills of the CIA, the U.S. is providing arms to the Syrian rebels while the Saudis are picking up the costs. Recall that the U.S. provided similar assistance to the mujahadin who forced the Soviet Union out of Afghanistan. That conflict included the creation of al Qaeda and their appreciation was demonstrated on 9/11.

At this point, other than guarding their border with Syria, the Israelis are concentrated on the threat that a nuclear Iran poses. They are not alone, but the question remains whether the Obama administration would support an attack on Iran. Obama’s animosity toward Israel could require them to wait in the hope of a new president by 2013.

The Israelis have a track record. In the past, when they felt their survival was on the line they destroyed an Iraqi nuclear reactor in the 1981 and a Syrian one in 2007. They have defeated their Arab neighbors in several wars since their founding in 1948.

Technically the U.S. has been at war with Iran since 1979 when the Islamic revolution there included taking 52 American diplomats hostage for 444 days. They were released when Reagan took the oath of office in 1981.

Iran has been the largest exporter of terrorism in the world since then. The ayatollahs have not ceased their quest for nuclear weapons capability and reportedly are closing in on the final stages. Meanwhile, they have developed missiles that could reach Israel, Europe, and even the U.S. Iran is this generation’s equivalent of Nazi Germany in the 1930s.

No matter what the outcome is in Syria, the Iranian leaders will at some point use nuclear weapons, most likely in an attack on Israel because their hatred of the Jewish State is irrational and because of their bizarre belief that they must bring about a global conflagration in order to secure the return of a mythical Twelfth Imam who will usher in a world under the domination of Islam.

Despite the inevitability of a nuclear war no one directing the affairs of this nation and others really wants to face the truth of this or, at least, discuss it in public. It explains, though, why the U.S. has moved a fleet of warships in and near the Strait of Hormuz, the chokepoint of the Persian Gulf and is building other military assets in the Gulf States.

How much of a military remains after the automatic sequester of Defense Department funding depends on the forthcoming election and the capacity of Congress to do anything sensible.

For now there are wars and rumors of war, and the world remains a huge insane asylum.

Dump a dictator and get full blown Sharia law...

Make me think of the old saying; what's worse? Burn to death or drown? Either way. you're dead.

You're right, Fred. There are no good choices in Syria and the rest of the Middle East.

The capacity of Congress to do anything sensible will be nil as long as that sour little man from Nevada has a chokehold on the Senate. But you knew that.