The "Worst President Ever"

You have to know how poorly Barack Hussein Obama has performed in office when the phrase the "worst President ever” has already become a cliché.

Obama’s first term is frequently compared to the devastation of Jimmy Carter’s first and only term. It left Carter a rejected, embittered man, frequently critical of those who succeeded him.

What did President Reagan do to create an economic boom in the wake of Carter’s sorry record?

Peter Ferrara, the Director of Entitlement and Budget Policy for The Heartland Institute, who served in the Reagan White House Office of Policy Development, writing in 2008 cited Reagan’s (1) tax cuts to restore incentives for economic growth, (2) spending reductions, including a $31 billion cut in spending in 1981, close to 5% of the federal budget, (3) an anti-inflation monetary policy restraining money supply growth, (4) deregulation that by 2008 had saved consumers an estimated $100 billion in lower prices, and (5) free trade in the form of worldwide agreements to reduce tariff taxes.

Citing tax cuts, Ferrara noted that “Reagan was not the first or last to adopt sweeping tax cuts to boost the economy. It has happened four, perhaps five, times in the last century, with virtually the same results every time.”

Obama has never stopped talking about raising taxes and his signature legislation, Obamacare, had more than twenty increases in taxes embedded—hidden—in the more than 2,000 pages that former Speaker of the House Nancy Pelosi famously said had to be passed in order “to find out what is in it.”

In contrast to Reagan, Obama has spent his years in office blaming George W. Bush and even the Clinton years for the economy he “inherited”, but which more accurately stated, was an economy he campaigned to fix, promising hope and change. 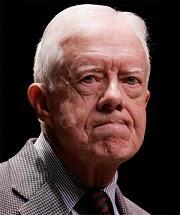 In 2005, Dr. Hans F. Sennholz, the chairman of the department of economics at Grove City College, wrote an analysis of “The Economics of Jimmy Carter” noting that Carter was “unaware of the inexorable economic principles that direct and determine economic life.”

Carter, Sennholz wrote, was unaware that, “Consumers determine not only the prices of consumer goods but also those of the factors of production, that is, land, labor, and capital. They determine and pay the wages of every worker” noting also that “Carter never tires of expounding his displeasure and irritability about the income and wealth of many capitalists and about government policies that seem to favor the rich.” Who does that sound like today?

In January of this year, looking back over the first three years of Obama economic policies, an Indiana University study noted that 46 million Americans are living below the poverty line—up 27% since the start of the recession dated back to 2006.

The report stated that “The Great Recession has left behind the largest number of long-term unemployed people since records were first kept in 1948. More than four million Americans report that they have been unemployed for more than twelve months.”

For those who still think Obama can be reelected, it is worth noting that the most severely affected states are Florida, Nevada, and Arizona which have been badly hit by the housing foreclosure crisis, and Michigan and Ohio that have seen the collapse of traditional manufacturing. These are all key states Obama would need to win.

On July 27, The Washington Post reported that the U.S. economic growth had slowed to 1.5 percent annual rate in the second quarter as consumer spending weakened. “The growth estimate Friday from the government suggested that the U.S. economy could be at risk of stalling three years after the recession ended.” While the official unemployment rate is 8.2 percent, it is widely believed to be above 10 percent.

“No president since Franklin D. Roosevelt, in the depths of the Great Depression, has been reelected when the unemployment rate exceeded 8 percent,” said the Associated Press report. “Presidents Jimmy Carter and George H.W. Bush were ousted when unemployment was well below 8 percent.”

At this point, the Obama campaign, unable to run on his economic record, has devoted itself to depicting Mitt Romney as a rapacious capitalist who grew wealthy investing in companies, a felon who continued to run Bain Capital after leaving to save the Salt lake City Olympics (a job for which he took no pay), and for failing to release his tax returns going back many years. Not mentioned is the fact that Obama is a multi-millionaire or his total lack of experience in the private sector.

Repeating all the errors of the Carter years and exacerbating the 2008 financial crisis by spending billions in taxpayer funds on failed “stimulus” programs, Obama compounded the crisis by waging war on the nation’s energy sector, wasting more billions on "clean energy", and using executive orders to circumvent immigration and welfare laws on the books.

The result has been the highest levels of federal deficit and debt in the history of the nation. He has, indeed, exceeded the damage Jimmy Carter inflicted during his only term in office. He is, indeed, the worst President ever.

You will incur the wrath of he who shall not be questioned!

Good, that means you hit the mark!

Well, maybe not WRATH exactly, but you're gonna make him pout.. LMAO

Fred, I am shaking in my boots...eeeeuuuuwwww,

Alan, the only thing Obama still has going for him is his half-black skin and his adoring, complicit media. So many Americans are shallow and uninterested and this is his voter base. Hopefully there are enough sane people left to vote him out on his ear!

Amen, you've hit the nail on the head, simply put,,,,OUTSTANDING

I have to disagree with you.

Obama is not the worst president in American history - that dishonor belongs to America's first gay president - Buchnan (1857 to 1861) - who allowed the country to drift into civil war.

Of course, I will have change my disagreement if Obama does manage to start a Second U.S. Civil War before he leaves office.

Personally, I think he can do it! In fact, I wouldn't be surprised if civil war wasn't Obama's real agenda from day one in office.

Ronbo, I can always tell when you're off your meds.