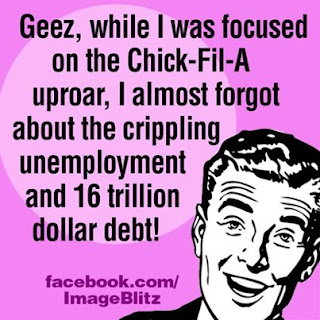 The good news is that the majority who will vote against Obama in November in a landslide rejection of African Style Communism are counting the days off on the calendar to the First Tuesday...98 days to go.

"Obama has failed to turn the economy around. And Mitt Romney is going to have more money to spend on the campaign than the president.

"You can do all the micro-targeting, all the get–out-the-vote efforts, and all the demonization of your opponent that you want. But unless it turns out that Romney spent his weekends during the 1980s robbing banks and loan sharking, I just don't see how Obama gets reelected."

The almost-convincing, breathless hysteria of those bent on demonizing Chick-Fil-A, the sincerity of it, tells me they are genuinely scared and angered by the thought of "going back" to a Republican administration (yes, that's the deeper idea at work, equating Republicans with Christians, and fundamentalist Christians at that). Even more frightening than such paranoia, are those who are so scared and so fed up that they can't see any difference between Romney and Obama. On TV yesterday, Fox newsman Bret Baier interviewed a Las Vegas businessman who said, "it doesn't matter who gets in, he won't help us", and another young man was quoted as saying he will half-heartedly vote for Obama again because, "when your choice is between a sandwich with salami [referring to Obama], and a sandwich without meat [Romney], you take the salami". That youth clearly does not know "meat" from "hot air"--nor has he bothered to get to know Romney, and his real accomplishments and character, even a little. So I say once again, the electorate has too many such, well, idiots, for me to be reassured its collective judgment will be sound. The country is in a mess because both parties have poked and prodded the electorate with fear, and into using personal fears to make our judgments. The Insane Left--and the thundering herd of sheep that makes up the Democrat party base--is entirely "round the bend" now. (I say this as an independent, who voted Democrat for President, after Richard Nixon, and before the useless and dangerous, character-crippled Obama, the "Masked Marauder" President.) There is simply too much fear and fear-misdirected anger in the American people (and in Obama). They are going to have to grow up, and face down fear--and see that Obama will not help them in that process, he will use it against them, against all of us (as he has for the last four years, quite clearly, time and time again), to get what HE wants (and only what HE wants, which is a USA that is indistinguishable from any second or third rate nation mired in ethnic and religious divisions). The watchword for America today is, "A House Divided Against Itself Cannot Stand" (and that is wisdom from the Bible, children, let's be honest, only more recently pointed out by Abraham Lincoln).

Great pic Alan! It has been widely spread via Facebook!

Since when do the ideologies or religious convictions of a business owner give politicians or anyone else the right to attack the business and/or drive it out of their communities? Chick-Fil-A isn't refusing to serve gay customers, or discriminating against gays in their hiring practices. If this nonsense is allowed to continue, it won't be long before the right to own a business will be limited to those individuals who the sitting government deems are "thinking correctly".

As a business owner myself, I certainly hope I am not the only one who sees a problem with this ...