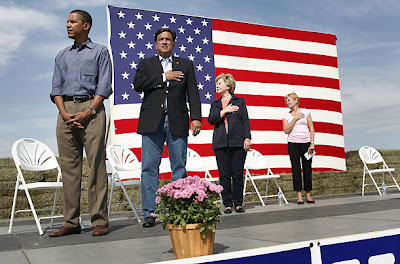 I regard the next four months between now and the election to be the most dangerous that the nation has faced since the months before the outbreak of the Civil War. I am concerned that President Obama, who has already declared “a state of emergency” in a recent Executive Order, will attempt to assert dictatorial powers and require U.S. military and law enforcement authorities to enforce them

You don’t get to be a general by saying no to the Commander-in-Chief. Witness the way “Don’t ask, don’t tell” was thrown under the bus by the most gay-friendly president in history. Then there’s the idiotic push to power naval ships with biofuels. The Fort Hood murders required a lot of officers to ignore the obvious. Et cetera.

My normal response to conspiracy theories is to dismiss them until I can find sufficient cause to give them credence. That said—President Obama is unlike any previous president this nation has ever had.

He is what those of us on the Right call “a red diaper baby,” raised from birth and mentored to embrace communism. Including his mother and grandparents, all of his closest friends and advisors come from the extreme Left.

By word and by action, Obama’s disregard for the Constitution, its separation of powers, and Americans suffering greatly from his policies, suggests that he is not beyond making the greatest grab for power using a bogus “national emergency” or manufactured “crisis” to declare martial law.

He has, moreover, recently issued three Executive Orders that (1) declare that the U.S. is in a state of emergency, (2) empowers the federal government to seize anything and everything it wants to pursue martial law in the event of an attack, foreign or domestic, and (3) to control all the means of communication nationwide..

The biggest question facing Americans is whether the members of our military and our law enforcement authorities would obey him.  My bet is that they would not.

Millions of active duty and veterans swear an oath when they embark on active duty. The oath for non-commissioned officers differs slightly in that it includes accepting orders from the President and the officers serving over them.

For officers, the oath is “I, [name], do solemnly swear (or affirm) that I will support and defend the Constitution of the United States against all enemies, foreign and domestic; that I will bear true faith and allegiance to the same; that I take this obligation freely, without any mental reservation or purpose of evasion; and that I will well and faithfully discharge the duties of the office on which I am about to enter. So help me God.”

The oath is for life! It does not end when you are discharged from active duty. Law enforcement officers take a comparable oath. As Gen. Douglas McArthur said when he spoke to the corps at West Point, the oath for all who take it is about “duty, honor, country.”

There is an organization called Oath Keepers composed of those who have served or currently serve in our military, in law enforcement, and as fire fighters. Here is their “Declaration of Orders We Will Not Obey.”

1. We will NOT obey any order to disarm the American people.

2. We will NOT obey any order to conduct warrantless searches of the American people, their homes, vehicles, papers, or effects—such as warrantless house-to-house searches for weapons or persons.

3. We will NOT obey any order to detain American citizens as “unlawful enemy combatants” or to subject them to trial by military tribunal.

4. We will NOT obsey orders to impose martial law or a “state of emergency” on a state, or to enter with force into a state, without the express consent and invitation of that state’s legislature and governor.

5. We will NOT obey orders to invade and subjugate any state that asserts its sovereignty and declares the national government to be in violation of the compact by which that state entered the Union.

6. We will NOT obey any order to blockage American cities, thus turning them into giant concentration camps.

7. We will NOT obey any order to force American citizens into any form of detention camps under any pretext.

8. We will NOT obey orders to assist or support the use of any foreign troops on U.S. soil against the American people to “keep the peace” or to “maintain control” during any emergency, or under any other pretext. We will consider such use of foreign troops against our people to be an invasion and an act of war.

9. We will NOT obey any orders to confiscate the property of the American people, including food and other essential supplies, under any emergency pretext whatever.

10. We will NOT obey any orders which infringe on the right of the people to free speech, to peaceably assemble, and to petition their government for a redress of grievances.

Samuel Adams of U.S. Revolutionary fame once said, "If ever the time should come, when vain and aspiring men shall possess the highest seats in government, our country will stand in need of its experienced patriots to prevent its ruin."

The oath keepers and other patriots are all that stand between “We the People” and a government verging on evil.

Every time I see that photo, my blood boils. Not because Obama has no respect for this country's traditions mind you ... but because that photo has been ignored by so many people. How can they even THINK of voting for someone who shows such an obvious disregard and lack of respect for the flag? It's beyond me ...

The most important question before Americans is, does a majority exist to vote Obama out of office in November? It is not a matter of how the military, or even the public, will react to obvious tyranny, if it comes, it is a matter of how many see the tyranny in what Obama has already done, and the tyranny implicit in his every judgment (that picture, of Obama trying to look casually disinterested while everyone else has his/her hand over their hearts, is his barely restrained ego subtly but determinedly expressing its independence of society's norms and expectations). I think Obama's presidency has been one long expression of a mid-life crisis, in which his long-nurtured lack of character is coming out ever more strongly as inappropriate behavior. He is not governing himself, but busting loose from his feelings of life's restrictions.

We are both former American soldiers who trained NOT TO OBEY illegal orders.

OUR OATH IS TO THE REPUBLIC AND NOT ANY INDIVIDUAL IN THE CHAIN OF COMMAND!

Furthermore, we were also trained in my day (1960s/70s/80s) to arrest officers and NCOs who gave illegal orders and turn them into the Military Police with a charge sheet.

In this situation, the rank of the individuals wouldn't matter - a private could arrest a general.

I agree if Obama were to issue orders to attack an American city/state or group of persons he considered "rebels" the generals and admirals would be required to arrest the president for treason.

I just finished something in my blog as to comparisons to 1984 and for whatever reason, this quote comes to mind as in regards to this President and in turn your fine essay.

One should in fact be very afraid as you point out Alan. I see so many parallels to the old Soviet bloc and for that matter 1930's Germany.

"To live in this process is absolutely not to be able to notice it—please try to believe me—unless one has a much greater degree of political awareness, acuity, than most of us had ever had occasion to develop. Each step was so small, so inconsequential, so well explained or, on occasion, ‘regretted,’ that, unless one were detached from the whole process from the beginning, unless one understood what the whole thing was in principle, what all these ‘little measures’ that no ‘patriotic German’ could resent must some day lead to, one no more saw it developing from day to day than a farmer in his field sees the corn growing. One day it is over his head.

An excerpt from
They Thought They Were Free
The Germans, 1933-45
Milton Mayer

Thank you for this quote from Mayer's book. It says volumes!

There are almost nothing in the way of police forces in the US anymore . . . and little in the way of a standing Army or a standing Navy. Almost all are National Guard members, wishing they could get back to families and friends.

Natural forces are destroying even the crops our farmers grow. Europe is now the same as a chicken with its head chopped of, still flapping around as if it were still alive, but in reality, compleately dead.

From the fundamental science I know well, the planet has begun another magnetic polar reverse, and the future does not bode well, for either fauna or flora.

Yes, Larry, the old world is collapsing and the new one will not survive the next magnetic reversal. They are always accompanied by mass extinctions.

The key portion of the oath in the example of Obama is "...I will support and defend the Constitution of the United States against all enemies, foreign and domestic."

It contemplates, as does the Constitution, the possibility that someone could come along who wants to make such a power grab for reasons that have nothing to do with what's in the nation's best interest.

I too have been watching all these incremental, hardly-reported things happening and have said that I would not be surprised if (most likely) right before the election, and certainly after if he loses) he might make some sort of martial law type power play. Heck, we may not even HAVE an election if he doesn't think he can pull it off.

I went to school in an era where they still taught about the rise of Communism, the rise of Hitler and Nazi Germany, and I'm seeing some very disturbing similarities that are escaping too many people for various reasons. I'm not an alarmist, but...I am scared for the future of this country and for her people under this president. I've heard others say the same thing since, and now you've very eloquently expressed it here.

Watch for an October surprise, Reichstag moment, false flag event to provide Caliph Hussein with the excuse to overturn the Constitution. Or even without that realize who many sheeple will be tricked into voting for him if there is a war, threat of war or terror event that just took place. London Olympics anyone?