Ethanol and Corn: The Power of a Really Bad Idea 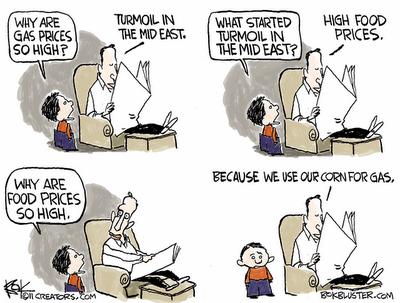 It took some eighty years for Communism to fail in the former Soviet Union. Along the way, millions were sent to gulags and millions more died from starvation and World War Two added to the death tolls. Spreading Communism like a religion, it had similar results in China and everywhere it has been adopted.

It takes a long time to rid the world of a really bad idea and, in the latter part of the last century, environmentalism sprung up like a weed to overwhelm the common sense of people with its mix of lies and hatred for humanity.

What does this have to do with the price of corn? A lot.

Under the Renewable Fuel Standard (RFS), an ethanol mandate exists that requires refiners to blend this moonshine with gasoline for the alleged purpose of reducing the emissions that driving a car produces. We are told it contributes to cleaner air and the effects of global warming—which is not occurring.

What it actually does is ruin your car’s engine because it is highly corrosive and it reduces the mileage you would get if it was not part of the gasoline blend. It also ensures that the growers of corn have a government mandated requirement that it be purchased. It is a farm lobby bonanza.

As Marlo Lewis of the Competitive Enterprise Institute points out about the RFS, “No matter how much of the U.S. corn crop is ruined by drought, no matter how high corn prices et, no matter how many people in developing countries are imperiled, the RFS requires that billions of bushels of corn be used to fuel cars rather than feed livestock and people. This is crazy.”

What most people, being city folk, don’t realize is how great a role corn plays in the nation’s economy, its export generates, and the astonishing list of uses to which it is put other than as a vital food for livestock—beef, pork and poultry—and consumed in hundreds of ways by people.

The Wall Street Journal, on July 19, reported that corn and soybean prices leapt to records on rising fears that the searing Midwest drought is further eroding the size of the coming harvests for two of America’s most important crops…The drought now covers more than half of the continental U.S. and covers a wider stretch of the country than in any drought since 1956, according to the U.S. government.”

And, even so, the Journal reported that “U.S. Agriculture Secretary Tom Vilsack said the situation wasn’t bad enough to warrant a reduction in government mandates for how much ethanol—typically made from corn—is blended into gasoline.” As for as Vilsack is concerned the RFS mandate must be enforced.

Marlo Lewis asks “Why as a matter of law should ethanol producers get first dibs on the U.S. corn crop?”

“What should their interest legally trump that of every other industry and consumer affected by corn prices?”

“Why should they have a legal privilege to jump to the front of the line ahead of meat, poultry, and dairy producers, or those who export grain to hunger-stricken countries?”

If we got rid of the ethanol mandate tomorrow our cars would last longer and drive farther. Since they are on our roads and streets anyway, does anyone really believe that air quality would be significant affected?

So ethanol, like communism and environmentalism, is yet one more very bad idea that is backed by the power of government mandates that benefit its growers, but does little else of any value for consumers.

And you are right, Alan, ethanol is very corrosive, and a blend of ethanol and gasoline reduces mileage by at least 15%.

The unintended consequences of the Left shown up once again. They never think through their so-called solutions - they're all about instant gratification and self aggrandizement. Too bad about the little people who get harmed along the way from their policies. I used to put Ethanol fuel into my car until I saw the black smoke being exhausted and my mileage going down. On top of that, when I confronted the manufacturer, they said that even though the engine has been approved for ethanol use, they suggest I don't use it as any engine damage would be on my dime! How's that for a clear enough message? Since stopping, my engine purrs along just fine and my mileage is up. Sure, it costs more but my car will last longer and I don't pollute the air!

If I had the authority, I would order the immediate arrest for treason of all leaders of the Democrat Party, Communist Party and the Environmentalist Wacko Movement.

Seriously, these are dangerous people who not only are attempting to destroy the United States of America, but detest mankind in general and seek the genocide of most humans - at best these degenerate traitors deserve only a short trial before a military courts martial before taking their last 13 steps up the gallows.

If this country is to survive, we must make the madness of Leftist traitors a very dangerous career with the real specter of the hangman always in their view.

The U.S. Constitution IS NOT A SUICIDE PACT AND THERE ARE LIMITS TO WHAT IS PERMITTED UNDER THE FIRST AMENDMENT.

I did a repair for a friend of mine daughter on her 1995 Nissan. When I pulled the fuel pump out, I saw all the debris in the sump and in the METAL tank. The newer cars use a composite material for the material of the tank, the older cars have metal and ethanol tears the crap out of the metal tanks and leaves a varnish on the intakes. I would love to find a station that doesn't use ethanol.

With the ongoing huge area drought, the havest of corn and soy beans is about nil this year. Food is going to be scarce, before all that long.

Better you should plant your own gardens, to feed yourselves. not going to be enough corn to make ethanol of this year.