Democrats Toss the Gays a Bone 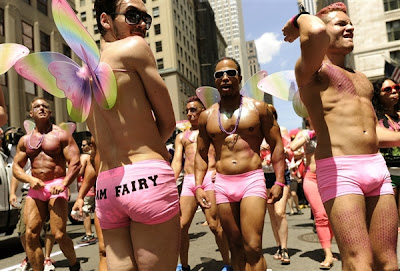 It’s official or, well, semi-official. The Washington Blade which identifies itself as “America’s leading gay news source” reported on Monday, July 30, that the Democratic Party platform had approved the language of “pro-LGBT positions” to be included in the party’s platform.

LGBT stands for lesbian, gay, bisexual and transgender for those of you who do not breathlessly follow the demands of this rather special group of voters. Apparently not satisfied in May when DC Comics announced that the sexual orientation of one of their superheroes would henceforth be homosexual, this latest breakthrough is surely being hailed in gay bars and salons from coast to coast.

The platform is still in a draft phase, but reportedly will include a plank approving same-sex marriage and rejecting the Defense of Marriage Act (DOMA). The Obama administration let it be known that it would not defend DOMA despite the fact that it is federal law. And, of course, Obama came out for same-sex marriage in May.

For those unfamiliar with DOMA, it was signed into law by President Clinton on September 21, 1996 after passing both houses of Congress with large majorities. Ah, for the good old days when Democrats actually supported marriage between a man and a woman.

Marc Solomon, the national campaign director for Freedom to Marry, was one of the witnesses testifying in favor of the “marriage equality” plank. How much marriage equality can the nation handle? There are people who are extremely fond of their pets. Will tree huggers insist on the right to marry an oak or a redwood? The variations are endless.

Solomon is quoted in The Blade saying, “As I testified to the Committee on Friday, the Democratic Party has a noble history of fighting for the human and civil rights of all Americans.”

Whoa! Solomon apparently is unaware that it was a Republican Party President named Lincoln who issued the Emancipation Proclamation or that the opposition to slavery was a major component of the Civil War. For a century after their defeat the former Confederate states not only fashioned the system of Jim Crow laws, but were the steadfast opponents of civil rights legislation right on through to the 1960s. Maybe they don’t teach U.S. history to gay boys and girls in our schools anymore?

A Huffington Post article reported that “The Democratic National Committee had hesitated to push for same-sex marriage as a platform plank as recently as this March, with LGBT sources telling The Huffington Post that they were getting pushback from party officials.”

Aside from the hideous economic, energy and foreign policies of the Obama administration, does anyone—including deluded liberal Democrats—think that including a plank favoring same-sex marriage and opposing the Defense of Marriage Act is going to produce enough votes to retain the Senate and the White House, let alone win back the House?

According to Wikipedia, “As of April 2011, approximately 3.5% of American adults identify as lesbian, gay or bisexual, while 0.3% or transgender—approximately 11.7 million Americans.”

So, to lock in those LGBT votes, the Democratic Party will include their plank. Or not. The final text of the party platform will not be voted on until the convention in September, though the close-to-final draft will be presented to the full platform committee in Detroit from August 10 to 12.

I do hope the plank becomes part of the platform if for no other reason that it is guaranteed to offend the millions of Americans who believe in the institution of marriage, are sick of Barack Obama, and are tired of the non-stop gay propaganda to justify homosexuality as a “normal” lifestyle in a world populated by billions of happy heterosexuals.

In the category of *Best use of an unintentional pun* ... The award goes to Alan Caruba for his title *Toss the Gays a Bone*...

LMAO... THAT is nothing less than AWESOME!

Between throwing BONES and calling in his most hated adversary I Just Love Obama Clinton as a last ditch "Read My Lips," it merely shows the world how desperate the world's biggest fraud really is...and for the first time in my life, I really feel ashamed for America.

You hit the nail on the head. Once Gay marriage is allowed watch all the other nut cases come out calling for their rights too - and what's to stop them when Pandora's Box has been opened? More unintended consequences. I have nothing against Gays - I just don't want to see, hear, or read about it continuously. And just what percentage of the population is Gay? 1%? All this noise to appease this tiny bunch of eternally unfabulous people. It's true, empty vessels make the most noise.

Homosexuals will never achieve their goal of having same-sex "unions" viewed as the moral equivalent of marriage. Homosexuality is a sin, condemned, and there is no path to redemption provided for that practice. The political parties can make any pronouncement they wish. God's laws are supreme. I pray for those trapped in this sin.