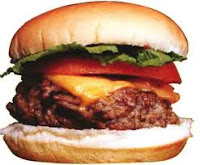 
Does it strike you as ironic that, along with all the advertisements for programs and pills that allegedly can help you lose weight, that there are also just as many urging you to eat all manner of tempting foods or dine out at ’s fast-food chains and restaurants?


In Lisa Tillinger Johansen’s new book, “Fast Food Vindication”, the dietician-author says, “Recently, several overweight/obese people have sued fast food chains for damages related to their weight gains, These people held the restaurants, not themselves, responsible for their excess pounds,” noting that “Congress eventually passed legislation to prevent frivolous lawsuits of this type from clogging the judicial system.”


Ms. Johansen is well aware that “There’s a serious obesity epidemic in the and it’s a growing problem throughout the world.”  I can remember was widespread famine and food scarcity. “Clean your plate,” mothers in the 1940s would tell their children, “there are children starving in .”  Not anymore. The same American fast-food chains are busy these days in a that has embraced capitalism while retaining a one-party system of government.


Ms. Johansen draws on her training as a registered dietician and her research, saying that one is more likely to over-eat in a sit-down restaurant and grow fat from “decreased or non-existent physical activity; increased caloric intake from snacks, sodas and energy drinks; and the content and size of foods prepared at home.


So, it’s your fault if you’re fat or your kids are fat.


The government is now engaging in all manner of advertising and other efforts to advise and keep people from getting fat, but the recent efforts of Michelle Obama regarding school lunch programs have backfired because the kids say they’re still hungry from the reduced portion sizes and the choices of food.


All this is of interest to me because my late Mother, Rebecca, wrote two cookbooks and taught gourmet cooking for some three decades in the adult schools of the community in which we lived or that were nearby our town. When soldiers returned from service in World War II, lots of them had been introduced to French and other cuisines, and they wanted their wives to learn how to prepare it. Television shows featured early teachers like Dionne Lucas and Julia Childs. Today, one can select from a dozen such programs.


One might think that I grew fat at my Mother’s dinner table, both neither she, my Dad, nor myself were fat because of the size of the portions and the wine that was served that helped metabolize what we ate. Age alone gifted my Dad and I with the familiar “belly” that men develop at the same time that fat goes to women’s buttocks.


In 2008, Connie Leas., wrote “Fat: It’s Not What You Think” (Prometheus Books) in which she said, “While experts purport to know how much fat is healthy and unhealthy, the truth is nobody really knows. People are different.” We know, however, if we’re fat. We need only look in the mirror. And too much weight does pose health risks.


“You need to take into consideration,” wrote Ms. Leas, “factors such as age, gender, physical activity, race, and where on your body the fat accumulates.”


Fat, however, has many positive factors for your health. “Fat is the primary building material both for cell walls and for the sheaths that surround and protect nerves,” wrote Ms. Leas, “The hormones released by fat cells affect metabolism, weight, and overall health. Besides producing hormones (that regulate bodily functions) fat cells also release other compounds, including immune-system cells.”


If, like me, you love chocolate and other sweets, Ms. Leas tells us that “Our genetic makeup is virtually that of our hunter-gatherer forebears. By the time they started planting crops ten thousand years ago, 100 percent of our genes were formed. In those days the problem was finding enough food to eat. When they found such a place, our early ancestors probably stuffed themselves. It was a matter of survival. Now food is always plentiful and survival is not the issue, yet we’re still programmed to take advantage of high-calorie food sources. We’re stuck with those pesky caveman genes.”


As a book reviewer of some fifty years, I can tell you that diet books and cookbooks flood into my office every month. I have long since concluded that maintaining a comfortable weight for yourself is a matter of eating moderately, getting some exercise, and understanding the role that fat plays in maintaining your health. Don’t like what you see in the mirror? Eat less. Snack less on sweets. Avoid diets that advise eating more of something and less of something else. It’s not what you eat, but how much you eat.


It is definitely not the government’s job to intervene. It’s your job.

Wonderful post this evening, Mr. Caruba. I wish I could of been in your mother's kitchen, I am sure to bet she was awesome.
My grandmother was a country cook, and was also Amish as my grandfather, but they were not heavy until in their later 70's, when the body changes. My grandparents lived through the depression, where there was little food, but my grandmother as well as your lovely late mother could make something awesome out of nothing.
French cooking looks fattening, but its not, as you say, its wine and also something that I learned from a lovely woman who came into my mother's quilting shop, she was Italian, and one of the secrets she told me about food, was Europeans enjoy their food, and do not gulp it, it is enjoyed with wine and good company and family. Food is also fresh from the open markets and shops, is bought daily and is generally hand crafted artisian food. Something we do not have here much in the States.

Thank you. I surely miss my Mom's wonderful dinners.

Oh great! We have fried chicken twice (that's two times) a year and you have to post somethng like this on this day. It's bad enough when Jeanie insists upon three paper towels to keep the chicken on, in the oven, now you are on my case. Thanks.

It has always been a curious thing that so many Americans are over-weight and the government wants them to eat less while on the other hand food banks claim at least 25% or more of Americans go hungary. How does that work out? Are Americans hungary because they overeat and now they can't afford as much food? Why are we giving them more food, if that is the case? None of this makes any sense to me.

@ Dave. Sorry about that, Dave. But only two times a year? I could not survive with my bbq chicken.