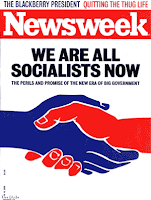 Newsweek, founded in 1933 by a former Time magazine editor, will cease to publish a print edition at the end of 2012. As a former journalist it pained me to read there will be cuts to its staff of 270 reporters and editors, but Newsweek has been a dinosaur for a long time, destined for extinction as a newsstand magazine and mailed to subscribers.
It always trailed Time magazine in circulation, a perennial bridesmaid, but the obvious reason is that digital news, delivered instantaneously, killed it; its declining advertising and circulation was simply the arithmetic of failure. It will live on as Newsweek Global in the Internet, but I have some doubts about whether even a $24.95 annual subscription price will keep it going. I suspect that most of its most faithful readers are themselves dying off.
Newsweek used to arrive at my home and was devoured by my Dad, Mom, and I. It was pretty good journalism until it was purchased by The Washington Post Company in 1961. Its liberal bias began to take a toll in much the same way it has done for other news organizations.
The decline of anything resembling journalism was captured when reporter Michael Isikoff learned of President Clinton’s dalliance with a White House intern, Monica Lewinsky only to have the story spiked by Newsweek’s editors. When the story broke on The Drudge Report it launched Matt Drudge and his news aggregation site into the Internet’s stratosphere of success.
In 2004, a study by Tim Groseclose and Jeff Milyo concluded that Newsweek, along with all other mainstream news outlets except for Fox News and The Washington Times, were irredeemably liberal and, by definition, no longer reliable sources of news.
Newsweek’s Washington Bureau Chief at the time, Evan Thomas, had acknowledged that Newsweek was “a little liberal.” He would later become its Assistant Managing Editor and, in 1996, he went on the record after leaving the magazine saying “there is a liberal bias at Newsweek.” Well, duh!
Things just got worse when, in the May 9, 2005 edition, Isikoff reported that interrogators at Guantanomo had “flushed a Quran down a toilet” to intimidate a detainee, but the magazine later admitted that its anonymous source for the story could not confirm the story. By then, however, the story had sparked the predictable anti-American riots and deaths in the Islamic world. The story was retracted under heavy criticism.
Newsweek’s only concession to a conservative point of view has been the columnist, George W. Will who has been a contributor since 1976. Writers need a steady paycheck like everyone else, but I am sure it must have pained Mr. Will to be associated with a news publication that was suffering a progressive form of suicide.
The Internet has put great strains on the mainstream liberal news media. It came as a shock when historian Niall Ferguson’s article, “Hit the Road, Barack: Why We Need a New President” was the cover story on August 27, 2012. I am betting that Newsweek will still endorse Obama before the election, but as I watch as one daily newspaper after another endorses Mitt Romney, there might be one last gasp of reality at Newsweek. I doubt it.
Liberalism killed Newsweek.
Yes, the Internet pushed it into its coffin, but the mainstream media still haven’t gotten the message. In a world where news is delivered 24/7 and available from a wide variety of sources, putting out a magazine once a week is untenable. Putting out one that endorses liberal politicians and policies is like drinking hemlock.
It is likely that Time magazine will suffer a similar fate and I suspect a host of newsstand magazines will also begin to disappear.
I may be among the last generation to have enjoyed magazines, but I rarely read any these days. I am letting my Bloomberg Business Week subscription lapse for the same reason I stopped reading The Economist.
It gets tiresome to keep reading references to global warming or climate change in these publications when that huge hoax began to come apart in 2009 with the revelations of “climategate.” The emails between the “scientists” who were cooking the books on climate data revealed how worried they were over the beginning of a new climate cycle in 1998 in which the Earth was cooling, not warming.
It is sad to see how formerly respected news organizations have abandoned any pretense about reporting the truth. Perhaps the ultimate example of this was, as media critic Bernie Goldberg put it, their “slobbering love affair” with Barack Obama that has afflicted America with a President who does not like America and may not have spoken a word of truth since he was an infant.
As a young reporter I used to write obituaries. Now I find myself writing one for Newsweek and doing so with a great sense of relief.
© Alan Caruba, 2012
Posted by Alan Caruba at 1:49 PM

This is the pithy and definitive kind of journalism I appreciate.

The mass delusion on the Left is on full, non-stop display again today, as I happened to catch some of it. I learned yesterday that Bob Schieffer of CBS is set to "moderate" the third presidential debate -- and just this morning, he outdid Candy Crowley and showed he is incompetent to moderate anything of importance to the nation: A Republican complained about the smallness of the Obama campaign, and used the "women in binders" quote as an example, and you know what Mr. Schieffer immediately did? He jumped on it, saying that it was Mitt Romney who brought the "binders" up in the first place! Holy something or other, half of the nation is so desperate to save face for Obama they will throw anything that comes into their feverish brains. Romney casually used the word "binders", the Left has made a big deal out of it, yet Schieffer thinks it is Romney's fault! Come to think of it, I suddenly realize this is just like Obama and his administration trying to say the Benghazi attack was because of an anti-Mohammed video that few had even seen: Put the blame on the person or thing you want to blame and knock out of mainstream consideration, not on the real culprits. We haven't had such clear enemies of our country since Hitler -- and the President (and Schieffer's version of the media) aids and abets them, and thus clearly shows, time and again, he is one of them (certainly more than he is one of us).

Yes, the internet started the death march for print media. But it is the liberal minded mentality that will cause Newsweeks death to go from sadness to glee.

I believe that despite the internet and digital news available 24/7, there is still room for a few print media news magazines. However, only the real cream of the crop, unbiased and hard hitting news reporting will be allowed that honor of remaining in paper format. I like holding an actual dead tree printed material as I am sure others do to. But, I want to read the truth. I will NOT waste my money and time on garbage such as the propaganda running cover for the inadequacies of those that rule over me. Newsweek was one of my favorites and I really liked the weekly format and the easy to read, quick, format. But after realizing that I can NOT trust anything they say and that most of what they write is agenda driven, I give up. I have better use of my money and time. Good Riddance and well deserved.

Couldn't have happened to a nicer magazine! How true when you write: "Liberalism killed Newsweek". It's what happens when you have a biased collectivist mindset running a business!

Vietnam drove the last nail into coffin for Newsweek as far as I'm personally concerned...

Back in '66 and '67 when I was still in high school there would be these lurid stories of alledged GI atrocities...

Found out later on that repeatedly the reporters from Newsweek never strayed far from the rooftop bar at the Caravelle hotel in Saigon and made up stories while in the throes of alcoholic inebriation...

I think it was in 1966/67 that many G.I.s woke up and realized the American Media had become pro-Communist and back stabbing the war effort.

You also cite the fact that many journalists stayed in more or less safe Saigon.

One important reason was the MACV got sick and tired of their treason - and made it difficult for them to get out in the field - and the few who did make it to the jungles quickly discovered the average soldiers was not their friend...or protector.