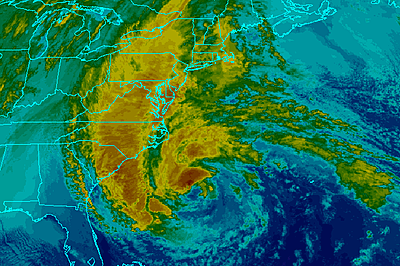 By Alan Caruba
When Mother Nature demonstrates her extraordinary power, I always hope that people will draw a lesson from it, but they never seem to. Hurricane Sandy is just the latest example of the futility and foolishness of thinking that humans can do anything about a hurricane or similar demonstration of who is really in charge. It is the planet. Not us.
This suspension of common sense is worsened when our President goes on television, as he did last Friday on MTV, to say “I believe the scientists, who say that we are putting too much carbon emissions into the atmosphere, and it is heating the planet and it is going to have a severe effect.” This is literally junk science, long since debunked by legions of scientists who know that carbon dioxide has nothing to do with the Earth’s temperature. The planet has been in a cooling cycle since 1998.
I keep hoping, too, that lacking the vital lifeblood of our nation--electricity—millions of people sitting around in the dark will ask themselves where it comes from, what generates it, how does it get to their home, and perhaps even why its cost keeps increasing even though the U.S. sits atop enough coal and natural gas to provide affordable power for two hundred years at current consumption rates.
According to the U.S. Energy Information Administration (EIA) in March of this year electricity from coal has fallen from 50% production to less than 40% by the end of 2011. Other sources include natural gas at 26%, nuclear at 22%, hydroelectric at 7% and “other” was said to be 6%. It should be noted that oil is a transportation fuel and not used to generate electricity. I believe that the amount that solar and wind produces is more likely closer to three percent. It is unreliable and uncompetitive and requires a traditional plant as backup when the wind isn’t blowing or the sun is obscured by clouds and, of course, at night.
Not surprisingly, the environmental organizations such as Friends of the Earth and the Sierra Club are already beating the drums about “climate change”, asserting “unpredictable, extreme weather.” The planet is always in a state of climate change if for no other reason that it is subject to the seasons. Blaming extreme weather on “climate change” is just a code for keeping the “global warming” hoax alive. The only reason President Obama talks about climate change is his hope that a carbon tax can be imposed to raise more money for the government to waste.
Electricity is not magic. Some form of energy must be burned to generate it and then it must be transmitted by a huge, very old grid to consumers.
In January of this year, The North American Electric Reliability Corporation warned that the reliability of the grid was in jeopardy. Thanks to the Obama administration’s (i.e. EPA) relentless attack on coal, the NERC noted that beyond the 38 gigawatts of electricity capacity that has already been announced to retire, it estimated that another 35 to 59 gigawatts will come off-line by 2018 depending on the “scope and timing” of EPA regulations. If you think the downed lines that Hurricane Sandy will produce are a problem, consider a future in which the electricity they are supposed to distribute will be significantly reduced.
What most Americans don’t know is that coal is the fuel of choice to generate electricity in many other nations of the world. Just five years ago it produced fifty percent of our electricity, but today it is less than forty percent, the lowest share since data began to be collected in 1949.  For example, China’s coal consumption grew 9.7% between 2010 and 2011. Last year China consumed 49% of the world’s coal supply. India’s coal consumption increased 9.2%
While the President blathers on MTV about CO2 emissions, my friend Dr. Jay Lehr, the Science Director of The Heartland Institute, dispatches that nonsense noting that “A simple volcanic eruption will cancel a decade of effort” to reduce emissions.
“Today,” says Dr. Lehr, “it is our government that is attempting to thwart our energy independence by blocking nearly every effort to develop our resources through completely unreasonable restrictions placed on us by the EPA and the Department of the Interior, and horrible policies of the Department of Energy which choose to throw unconscionable sums of money at renewable energy projects…”
Ultimately, while millions of Americans light candles in the dark or hope their flashlight batteries hold out, we have to ask WHY the Obama administration has waged a war on the provision of electricity.
This is a deliberate policy to weaken the nation’s capacity to function at every level and yet we are days away from an election where millions of Americans will vote to reelect Obama and send his Democratic Party minions to Congress.
It is in line with the Obama administration’s deliberate policy of reducing our military capacity on land, sea and air.
The only silver lining in the distress and disruption of Hurricane Sandy may be the awakening of voters to the critical need for more, not less, production of electricity, for improvements to the national grid, for more oil production for our transportation needs, and concurrent with this, the hundreds of thousands of jobs that such efforts would produce and billions it would generate to begin to reduce the national debt, now in excess of $16 trillion.
Long ago, the cartoon character, Pogo, famously said, “We have met the enemy and it is us.”
The enemy, I would suggest, is President Barack Hussein Obama, his many shadowy, unaccountable “czars” influencing energy policies, his Cabinet Secretaries of Energy and the Interior, and the rogue Environmental Protection Agency that is set to unleash regulations that will destroy the economy, aided and abetted by the nation’s environmental organizations.
That’s Hurricane Sandy’s message to America.
© Alan Caruba, 2012
Posted by Alan Caruba at 11:35 AM

Mr. Caruba,
I am not the brightest lightbulb on the planet (no pun intended), but I seem to think that most of O's minions and czars did not take or were asleep at the switch in science and biology and botany classes...plants use and need carbon for their existence...Or does O have a plan to deep six growing food? Seems there is a plan in the making to control the food production.
Just a thought

I am not sure that the production of more electricity will help in the face of something like the storm that we my suffer by. A stronger grid will just help to get power back faster. Not that I think that's a bad thing.

@JP. The US needs electricity for current and future needs. Without the capacity to generate it, we're sunk!

Obama and his minions are working very hard to sink America back to the dark ages. Obama will feel much better when Americans have the same standard of living as those people in third world countries. He redistributing American wealth at breakneck speed to other countries...after skimming off the top for himself thru so called green energy companies that are going bankrupt. Given a second term we will be under the UN with Obama as dictator.

"The only reason President Obama talks about climate change is his hope that a carbon tax can be imposed to raise more money for the government to waste." Great comment and I agree with you completely.
On the Big Island of Hawaii the volcano is spewing out gases into the air in huge volumes and has done so for about 30 years. Earlier this year the EPA imposed more emission restrictions on the local electric company saying they were polluting Volcanos National Park!!!

I hope Sandy doesn't hit the East Coast so hard that she causes power disruptions on a nationwide scale... It could happen I suppose, the grids are connected..