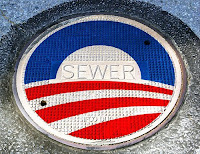 I suspect that Barack Obama has been told by his pollsters that he is going to lose.

Most certainly whenever Messeurs Axelrod and Ploufe, his political brain trust, get on television to respond to questions about how he will fix the economy, all one hears are the same tired excuses and empty promises. The news headlines these days tell another story.

Headline – Libya: The White House handling of the Libyan attack has already been dubbed “Benghazi-Gate” and revealed the level of contempt the White House has for the intelligence of Americans. Bad enough Americans are angry that an American ambassador lost his life in a 9/11 anniversary al Qaeda attack, no one with ten brain cells to rub together believes it was about an amateur movie no one had seen.

Headline – Afghanistan: After wars in Afghanistan—still ongoing—and in Iraq, Americans are extremely wary of the U.S. becoming embroiled in more conflict and yet Obama’s handing of foreign affairs, particularly in the Middle East, appears to have exacerbated events there. An unavoidable conflict with Iran looms ahead and Americans believe that Israel and our homeland must be defended. Obama gives little indication he would, but a President Romney leaves no doubt in their minds.

Headline – Foreign Policy: Overall, the impression is that Obama has weakened the nation when it comes to foreign policy despite the fact that it, along with defense, is a primary duty of any President. All the electric cars and bankrupt solar companies are no substitute.

Headline – Energy: The vast reservoirs of oil, natural gas, and coal that have either been under attack or restricted by the Obama administration along with the jobs they represent. Yet another reason for voters to elect Romney. Obama’s decision to deter the building of the XL Pipeline from Canada is still relatively fresh in the minds of voters and the shutdown of coal mines and power plants has had a ripple effect among those who make their living in these industries.

Headline – Fast and Furious: Still another scandal is bubbling up to the surface of voter concern. “Fast and Furious”, a Justice Department gun-running fiasco that got a U.S. border guard killed along with hundreds of Mexicans was just featured on Univision, a popular channel among Hispanics, and the White House has been counting on that demographic for support.

Headline: Gay Marriage: Obama’s refusal to uphold the Defense of Marriage Act and his endorsement of gay marriage could prove a deal-breaker among a lot of people who might otherwise vote for him.

Headline – Obamacare: I think the White House continues to underestimate the level of anger over having Obamacare forced upon us. Most polls show that at least half or more respondents expect it to be repealed IF Romney is elected and guess who they will vote for? Having taken $716 billion out of Medicare to pay for Obamacare, the reality of death panels has no appeal for the nation’s senior citizens who vote in large numbers.

Headline – Vacations: The lavish lifestyle of the Obama’s while he has been President had not been lost on a nation in which 23 million Americans cannot find a job or have given up looking for one. The debt load on new college graduates is cause for much less enthusiasm for a second Obama term in office.

Headline – The Economy: In the end, it is the economy that will dominate the outcome of the election and, no matter what the polls say—now widely regarded as manipulative—and what the mainstream media reports, the facts and the failures of the Obama years are known to Americans no matter how many times he tries to blame Bush for them. The stimulus failed. The Federal Reserve’s quantitative easing (printing money) has failed. Add in 43 straight months of unemployment at 8% (but actually closer to 12% to 15%). There is no recovery and no prospect of one if Obama is reelected.

It adds up to a torrent of bad news for Obama and that, dear reader, is the good news as the elections on November 6 draw closer with every passing day.

How many cards are there in the "racist" deck? I fear that this failed presidency will not be recorded accurately in the history books for fear of the "racist" outcry! The progressive, socialist, really Marxist, Democrat party still controls academia and the publishing side of things. The young people of today lean towards the dialectic in their thinking and consensus will be on the side of the PTBs.

I hope you are right. But Obama and his supporters in the media are putting on quite a show, i.e., that they are ahead in just about every swing state, and will, accordingly, win. Guess we'll find out on 11/7.

A little over 13% of the US population is Black. This group cannot elect anyone to the presidency. Plus, there are many Blacks who are with the GOP. If yo want to blame anyone, blame it on Lyndon Johnson who started the ball rolling with social programs that had rules that were not really well-thought out.

People who are misusing the system are often following all the "rules."

I don't like what Obama did, but the alternative right now is worse than what we have in place.

George, I hope--and believe--I am right, but you are right that the media has dropped all pretense of even telling the truth any more.

Linda, the commentary does not make any reference to black Americans. My sources, however, estimate that as many as two million may decide to stay home or even vote for Mitt. Four years later and both blacks, whites, and Hispanics are united in their disapproval of O's job performance.