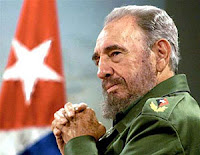 My foremost memory of Fidel Castro dates to 1961 during the Cuban Missile Crisis when, as a young soldier, the Second Infantry Division at Fort Benning, Georgia was put on full readiness in the event the U.S. had to invade Cuba. I was informed that I would remain in the Army “for the duration” thereby extending my enlistment. Happily, the crisis was resolved in 13 days, but everybody was holding their breath.
I had begun to hear of Castro as he pursued his efforts to overthrow the Cuban dictator General Fulgencia Batista who had overthrown an elected government. Throughout my college years, 1955-1959 at the University of Miami I had become friends with the sons of wealthy Cubans who were sent to the U.S. for a higher education. There were discussions as to whether they should return if he was successful. I knew nothing of Batista beyond the fact he was a dictator, but I harbored doubts about Castro even then. It was during the Cold War and anything that suggested a communist revolution made me wary.
Castro had been born into a wealthy family in 1926 and had drifted into the communist orbit like so many who thought it would bring "social justice" to the masses. He was intellectually gifted and had attended the law school at the University of Havana. The talk at that time was all about nationalism, anti-imperialism, and socialism.
He would engage in a number of unsuccessful coup attempts and even ended up in one of Batista’s jails, but was released in a 1955 amnesty. He went to Mexico where he met up with a psychopath named Ernesto “Che” Guevara. Returning to Cuba in 1956 with his brother Raul and a group of insurgents, they eventually fled to the mountains of the Sierra Madre. From there they mounted a number of successful military campaigns until Batista’s government collapsed in 1959.
The media made no mention of Castro’s communist beliefs for a long time, portraying him as some kind of Cuban Robin Hood, a man of the people. All that gave way to his affiliation with the Soviet Union and by 1961 outgoing President Eisenhower cut off all diplomatic relations and his successor, John F. Kennedy, inherited the CIA’s plans to put their own insurgents in Cuba to overthrow Castro. The Bay of Pigs invasion was a total fiasco. By 1962 Castro’s reliance on the Soviet Union led to the installation of offensive missiles and, as they say, the rest is history. It was a miscalculation by then-Soviet Premier, Nikita Krushchev.
The media kept reporting about things such as Castro’s creation of 10,000 new schools and the improvement in Cuba’s healthcare system, but what was happening was Castro’s positioning himself as the leading anti-American spokesperson in Latin America and encouraging revolutionary movements there and in Africa and Asia.
Meanwhile, Cubans did what they could to escape a prison nation. In 1980 alone, 120,000 fled when Castro let Cubans living in exile—mostly in Miami—to claim freedom for their relatives who wanted to leave. Castro also packed the boats with prison inmates, mental patients, and other social undesirables.
The collapse of the Soviet Union in 1991 took down Cuba’s economy with it. In 2001 Cuba suffered massive damage from Hurricane Michelle and President George H.W. Bush offered humanitarian aid in the form of food. To deal with energy needs, Castro ordered thousands of Cuban doctors be sent to Venezuela in exchange for oil imports.
By 2008 Castro’s deteriorating health caused the then 81-year-old dictator to turn the day to day running of the nation over to his brother who was 76 at the time, but he retained power as the First Secretary of the Communist Party.
Castro remains one of the world’s most despicable despots and Cuba’s jails are filled with anyone who openly expresses any opposition to his regime. Others were simply shot. Two Americans are being held hostage these days.
I will break open a bottle of bubbly when I hear the news that he is dead. I will do the same for Hugo Chavez of Venezuela.
© Alan Caruba, 2012
Posted by Alan Caruba at 1:14 PM

Agreed on ALL counts, especially the bubbly!

I, too agree with your sentiments and those of Fred.

I remember how the press played Castro up as some sort of hero. If fact, I clearly recall "Castro hats" and even "Castro beards" for sale in the local Five and Dime TOY departments back then.

It just goes to prove the leftist leanings of the MsM even then.

I still cannot believe the stalwart anti-Communist JFK didn't take out the degenerate Communist filth named Fidel Castro in the aftermath of the 1961 Bay of Pigs invasion.

A former Marine told me the original plan was for a follow up USA invasion after the Cuban Exiles had secured the beachhead.

What nixed that plan was the fact that the only operational MIG in the Castro air force was able to sink the supply ship for the Cuban Exiles - and they literally ran out of ammunition when Castro's pathetic militia counter attacked.

Meanwhile - just off the Bay of Pigs - American aircraft carriers full of planes and Higgins boats full of heavily armed U.S. Marines waited for the "go" order for invasion from JFK that were never issued.

I always felt the JFK simply "lost his nerve" at the last moment.

I will celebrate with you. I am a Cuban American born to Cuban refugees. I fear for the future of this country and the epidemic blindness of the American people to see the similarities in rhetoric and ideals of Obama and Castro