God and Governance in the USA 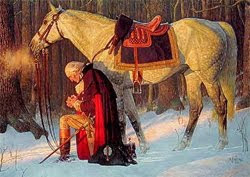 I confess I always look forward to July Fourth because it carries with it memories of my parents who proudly displayed the flag on every holiday and of the full day of celebration by my hometown that began with races in the morning by the various grades of school kids, baking and other contests, a circus and a concert in the afternoon and early evening, concluded with a grand display of fireworks at night.

My parents were both first generation Americans and their parents understood what the American Dream was because they had lived it. They had endured hard times and good, and were fiercely patriotic.

They would have been mystified and angered to hear the talk of the “separation of church and state” to justify thwarting the acknowledgement that God is at the very center of the nation’s creation. The Constitution does not speak of separation. It says that “Congress shall make no law respecting an establishment of religion.”

The Founders were well aware of the torments and injustices of the “old world” in which there were state religions and woe to those who were not members thereof. They were not anti-religion. They were against formal alliances between the state and a particular religion.

Atheists and secularists fail to acknowledge that “We hold these truths to be self-evident, that all men are created equal, that they are endowed by their Creator with certain unalienable rights, that among these are life, liberty, and the pursuit of happiness.”

The belief in God and the right to worship Him as one wished literally accounts for the first brave journeys to the land that would become colonies and then an independent nation. The Pilgrims came in search of the freedom to worship as they wished.

When the Declaration of Independence was signed, Samuel Adams wrote, “We have this day restored the Sovereign, to whom alone men ought to be obedient. He reigns in heaven and…from the rising to the setting sun, may His Kingdom come.”

When the fifty-six men from the thirteen colonies first gathered in Philadelphia on September 7, 1774 as a sitting Congress, there was a suggestion that the meeting begin with prayer. The motion was initially opposed, not because the delegates did not believe in God, but because they represented various religious backgrounds. There were Episcopalians, Quakers, Anabaptists, Presbyterians, and Congregationalists.

Samuel Adams stood to address the assembly. “I am no bigot. I could hear a prayer from a gentleman of piety and virtue.” He suggested that an Episcopalian clergyman, Jacob Duche, fit that description and that he be asked to read prayers to the Congress the following morning. The motion was seconded and passed.

In a book by Toby Mac and Michael Tait, “Under God”, they note that “A paid minister, whose salary has been paid by taxpayers since 1789, opens every session of Congress with prayer.”

On December 4, 1800, just weeks after moving into the newly opened Capitol Building, it became a home to religious services. Senator John Quincy Adams recorded in his diary, “Religious service is usually performed on Sundays at the Treasury office and at the Capitol. I went both forenoon and afternoon to the Treasury.”

Among the many interesting facts and stories they cite is one about the Washington Monument that is topped with an aluminum cap upon which two words are etched, Laus Deo, meaning praise to God and, within the cornerstone, laid on July 4, 1848, rests the Holy Bible, presented by the Bible Society.

Let those who would cast out God, would cast out the religion of the Founding Fathers and tolerance for those seeking freedom under God be rebuked. They are strangers to what it means to say, “I am an American.”