U.S. Looks Weak as Iran Flips Off the World 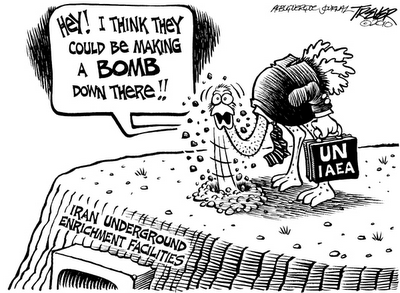 For months now, Mortimer B. Zuckerman, the owner and editor-in-chief of U.S. News & World Report, has been writing increasingly desperate pleas for the Obama administration to do something about the greatest threat to peace in the Middle East and the world, Iran.

“When Barack Obama became president, Iran had perhaps several thousand centrifuges enriching uranium. Now it may have thousands more,” wrote Zuckerman in the August edition. “What’s at stake here is too menacing for the world to delude itself that Iran will somehow change course. It won’t.”

It must be very frustrating to be a multi-millionaire media mogul and yet unable to do much about an impending disaster other than warn about it. My sense is that it falls on deaf ears at the White House.

Anyone as dense as Obama should not be allowed to be Commander-in-Chief, but he is and, worse for America and all other nations, he likely has no idea of the dangers involved in reducing the nation’s military capabilities at a time when Iran is closing in on becoming a nuclear threat to the Middle East and beyond.

“So, if Iran succeeds,” warns Zuckerman, “it would be seen as a major defeat and open our government to doubts about its power and resolve to shape events in the Middle East. Friends would respond by distancing themselves from Washington; foes would aggressively challenge U.S. policies.”

Writing in The Wall Street Journal, David Kay, the man who led the U.N. inspections after the Persian Gulf War and later led the CIA’s Iraq Survey Group following the 2003 invasion, dismantled the Obama administration claims that either economic sanctions or a weapons inspection program in Iran will deter the Iranians. “As a former weapons inspector, I have very bad news: A weapons inspection regime in Iran will not work.”

Don’t look to the United Nations to do anything. “Even after Iran’s 20-year-long clandestine program started to be revealed the IAEA inspectors have had a hard time getting United Nations authority to confront the Islamic Republic.”

“The blunt truth,” said Kay, “is that weapons inspections simply cannot prevent a government in charge of a large country from developing nuclear weapons.” It didn’t even stop a small country, North Korea, from doing so.

Does anyone believe that President Obama will support an Israeli attack on Iran to degrade its ability to complete its goal of acquiring nuclear weapons?

Does anyone know the extent to which the President is trying to reduce the U.S. arsenal of nuclear weapons? Or the capability of the U.S. Air Force to respond to a threat to the peace anywhere in the world?

The only time this president has shown any “leadership” was in response to criticism by the former head of the forces in Afghanistan, Gen. Stanley McCrystal. Meanwhile, the cost cutting in the Pentagon continues relentlessly.

All this reeks of the weakness shown by Great Britain and European leaders in the face of the obvious aggression by Hitler’s Nazi regime in the 1930s.

A January 31, 2008 article in The Economist, “Has Iran Won?” asked, “Who would have thought that a friendless theocracy with a Holocaust-denying president, which hangs teenagers in public and stones women to death, could run diplomatic circles around America and its European allies.”

The answer is that it’s easy when nations display the same gutless response of earlier generations and the weakness of the present administration.

The quote you attribute to Obama was actually in a satirical piece written by Johm Semmens.

Thanks. I will delete that graph from the text.

All Obama is going to do about Iran is talk, he can't, and won't act against his Islamic brothers...

The Bush Administration must share the blame with the Obama Regime for allowing Iran to become a nuclear power, because by 2005 it was certain that Iran would have nukes and a air campaign lasting several weeks by the Air Force and Navy was the only way to stop it.

@ Ronbo:
It's easy to get into a war and very hard to get out of one, i.e., Iraq and Afghanistan. I think this was on Bush's mind and no doubt influences Obama's as well.

It is a whole lot more difficult to get out of a war when you set rules of engagement for your troops which prevent them from doing what has to be done to destroy the enemy's will to prosecute said war.

While I personally hate war myself,
and hate seeing American troops killed in combat, I hate far more that those troops are being killed to no purpose other than a political one, and that they are forbidden rules of engagement which would allow them to win decisively.

I served on active duty 1954-1958, when large magnitude war appeared to be immanent. I am certainly most happy that I served my military obligation to my country then, instead of now. Then we would have fought to win decisively, not to bring our enemies leaders to the negotiations table, but rather to a place for them to surrender.