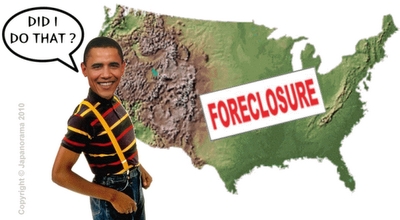 The unemployment rate keeps climbing and the polling results for the President and Congress keep falling. Conservatives are well aware that the Obama administration has relentlessly pursued legislation harmful to the economy, but just how bad it is and how bad it will become in 2011 may not have sunk in fully for the public in general.

Nothing among Obama’s legislative agenda and executive orders has done anything other than push the nation more and more toward bankruptcy. Perhaps the oddest aspect has been the action of the Federal Reserve which is, in theory, an independent entity. Suffice to say, it is pursuing policies that reflect the same disastrous actions that prolonged the 1930s Great Depression. Not surprisingly, Fed Chairman Ben Bernanke has pronounced the outlook “unusually uncertain.”

The worst is yet to come because the end of the Bush tax cuts on December 31, 2010 will generate major increases in taxation that will affect all but the appalling 40% who pay no taxes at all. This isn’t redistribution of wealth. It is a penalty levied on investors, entrepreneurs, and those who still have jobs.

One of those policies, the president’s shut-down of drilling in the Gulf, twice rejected by the courts, will add thousands more to the ranks of the unemployed without any justification.

When the tax cut deadline comes at midnight on December 31, the “death tax” on estates will return, increasing 55% on estates of $1 million or more, but it won’t just be “the rich” who are affected. As reported in Investor’s Business Daily, “The lowest bracket for the personal income tax, for instance, moves up 50%, to 15% from 10%.” These brackets will increase 25% to 39.6% for others.

The marriage penalty returns and the capital gains tax “will jump 33%” and “the tax on dividends will go all the way from 15% to 39.6%--a 164% increase.” Wall Street will hit a wall of resistance from investors.

A spending-crazed Congress will have $115 billion more to waste and, according to the Congressional Budget Office, it will reach $2.6 trillion by 2020, a mere decade from now. These funds are theoretically going to be allocated toward paying for the vastly expanded Obamacare “reform” of the already insolvent Medicare program.

A booklet by Michael D. Tanner, “Bad Medicine”, published by the libertarian Cato Institute, points how the fallacy—the lie—that an expanded Medicare will protect those now without such protection against rising healthcare costs. The truth is that by 2019 an estimated 21 million Americans will still be uninsured.

Obamacare will cost far more than advertised; more than $2.7 trillion over ten years of full implementation and will add $352 billion to the national debt over that period. Insurance costs will skyrocket for younger, healthier workers.

Furthermore, Obamacare “will increase taxes by more than $669 billion between now and 2019, and the burdens it places on business will significantly reduce economic growth and employment.”

The Obama administration and Democrat-controlled Congress will not engage in any of these well known remedies. What is occurring is a deliberate policy to destroy the nation’s economy and with it the nation. The trade deficits the nation has run, importing more than we export, will ensure we do not dig ourselves out of the hole for years to come.

All hail, Obama! The Nation Killer!

Few people realize that there were 2 revolutions in Russia in 1917. The first was a bloody revolution to replace the Tsar with a democracy. It was successful, and for a short while, the form of government of Russia was a democracy. Then came the second revolution which ended with communism being the form of government. The other countries around Russia, which together with Russia were the Russian Empire then became, by force, SSRs, and the USSR was the end result.

The Bolsheviks fomented both revolutions. Lenin was a smart man, aside from being an ideologist, and knew that there were not enough people who liked the thought of communism, essentially just another form of dictatorship, to overthrow the Tsar, but democracy seems a delightful concept to the masses so could get large popular support of the masses. He also knew that democracy is about the least effectual form of government, and that those who supported the overthrowing of the Tsar would become quickly disillusioned with democracy, and demand change much more rapidly than could be done with a democratic form of government. Fomenting another revolution to overthrow democracy was not difficult.

This is what I have found having done my own research.

As a wag, I say that with with communism, there is a pretense that the private control of property doesn't exist. With socialism, the pretense is that it does.

In regards to Larry's comment on the Russian Revolution of 1917 - There was only one revolution that overthrew the Czar on March 15, 1917. The Communists came to power by means of of a Bolshevik putsch against the Russian Republic in November, 1917. This takeover was not a done deal until after the Russian Civil War ended in 1921.

If current events in the USA are following the Russian Revolution model then our Republic is being overthrown by a Communist coup that will end in a very bloody civil war.