You Must Love the EPA--Or Else! 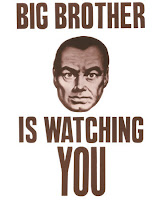 The U.S. Environmental Protection Agency comes as close to George Orwell’s version of Big Brother as any element of the federal government. It operates on a totally irrational basis, ignoring anything that even passes for real science. Through its regulatory power it imposes insane mandates that drive up the cost of everything and is trying to drive major elements of energy provision out of business.

What, for example, is the EPA doing offering “tips to protect eyes, skin from the Sun’s harmful rays”? Does the EPA sell sunscreen products? Charged with cleaning the nation’s air and water, why is it venturing into areas better served by the U.S. Department of Health and Human Services?

Charged with keeping the U.S. waters clean, why has the EPA launched a “National Water Conservation Campaign” complete with tips such as checking the toilet for “silent leaks” or replacing your showerhead with a “WaterSense labeled model.” Do we really need the EPA in the business of approving some showerheads over others?

The answer is that the EPA wants to be involved with all aspects of people’s lives and sees no limits on its authority or power and it wants you to love it for all the effort it is making to save you from a horrible death.

Recently the EPA classified milk as oil! How crazed is that???

It based this on the fact that milk contains animal fat which is a non-petroleum oil. The result is that dairy farming has become even more costly and you can bet the costs will be passed on to consumers.

While the Gulf of Mexico is polluted by millions of gallons of oil from the BP disaster, Frank Konkel of Silver Sky Dairy in Hesperia, Michigan, and all other dairy farmers will have to develop and implement spill prevention plans for milk storage tanks. The rules are set to take effect in November.

In another blow to the economy, in late June the EPA announced it was voiding certificates of approval for the import of up to 200,000 gas-powered off-road motorcycles and all-terrain vehicles.

The reason? The EPA “suspects that tailpipe emissions information was either incomplete or falsified.” All vehicles imported or manufactured in the United States are required to have certificates of conformity which are issued by the EPA. I suspect the EPA does like any vehicle that runs on gasoline and is used for recreational purposes.

The tentacles of the EPA reach into every enterprise in the nation. Like the FBI, the EPA even has its own fugitive list.

When not magically changing milk into oil, the EPA continues its crazed campaign to regulate every aspect of life in America. In June, it finalized requirements under its national mandatory greenhouse gas reporting program for “underground mines, industrial wastewater treatment systems, industrial waste landfills, and magnesium production facilities.”

The target this time is methane, among the most minor elements of the Earth’s atmosphere one can identify. In 1998, the amount of methane in the Earth's atmosphere was estimated to be 1,745 parts per billion.

Swamps and bogs around the globe naturally produce methane and always have. Identifying it as a “greenhouse gas” is part of the global warming hoax that claims methane and carbon dioxide are causing the Earth to heat up. Apparently no one has told the EPA that the Earth has been cooling for the past decade.

And, finally for the purpose of this quick look at EPA lunacy, to the joy of the taxpayer-subsidized biodiesel industry, the EPA announced that it would require the domestic use of 800 million gallons of biodiesel in 2011. It is made from animal products. This is part of the EPA’s never-ending war on oil.

As a close observer and expert on the oil industry pointed out to me, “The EPA always speaks in pints, quarts and gallons. That makes it sound larger. Step back and 800 million gallons equals 19 million barrels of biodiesel annually. This is the proverbial drop in the bucket when total oil demand is 5,501 million barrels annually.”

Biodiesel and biofuels have been subsidized with taxpayer’s money for some three decades at this point. The annual biofuel ethanol production increased only 16% in 2009 to 256 million barrels. This annual production is less than 8% of U.S. foreign oil imports of 3,307 million barrels. There is no way ethanol can replace foreign oil. There is no sensible reason to go on subsidizing biofuel or biodiesel.

The EPA has been totally out of control almost from the day it was established in 1970 by an executive order. Within two years it banned DDT. That ban was picked up by the World Health Organization and the result has been an estimated 400 million people who have since died from malaria. If that isn’t genocide, I don’t know what is.

If we don't ALL stop breathing, the world is doomed...

That's pretty much what the EPA wants, the simplified version...

Hi Mr. Caruba. The EPA and other groups won't be satisfied until we're all dead (that is everyone but those in power) and then the three toed frogs and swamp mice can live in perfect harmony in their natural utopia.
Oh, I don't even know what to reply to things like this.
God Bless you Mr. Caruba- have a great weekend.

...an estimated 400 million people who have since died from malaria. If that isn’t genocide, I don’t know what is.

I don't either, Alan.

Also, since these mega deaths are nearly 100% people of color in Africa and Asia, the EPA is clearly RAA-CIST.

Ronbo, I see your point, and I agree that the accusations of racism against the Tea Party are unfounded. Racism can be SEEN anywhere you look. It's no secret, and I don't expect that, in our lifetime, it will ever disappear entirely. Expecting a gathering of several thousands of people to be entirely free of racists is ridiculous, just as ridiculous as expecting a group the size of the NAACP to be free of them. However, holding either organization RESPONSIBLE for those individuals is also ridiculous.

Unless an organization makes being a racist a requirement of membership, or openly tolerates racist rants from its members, it's a subject that should be dealt with individual by individual.

That being said, which or the two groups I just mentioned openly tolerates racist rants from its members?