NASA's Mission to the Muslims 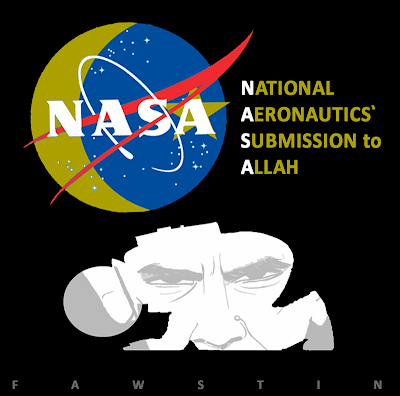 I felt like this back in the days when the Watergate scandal slowly, painfully unraveled, revealing the most appalling stupidity and criminality emanating from the Oval Office. From the night when the burglars were arrested in the Democrat Committee headquarters on June 17, 1972 to the day Nixon resigned on August 9, 1974, Americans were forced to witness and endure something unthinkable.

The news that NASA administrator, Charles Bolden, had been dispatched to the Middle East to fulfill what he said was its “foremost” mission, “to find a way to reach out to the Muslim world and engage much more with dominantly Muslim nations to help them feel good about their historic contribution to science…and math and engineering” was so appallingly stupid that it defied any legitimate reason for NASA to exist.

The other mission objectives Barack Obama charged Bolden with were to “re-inspire children to want to get into science and math” and to “expand our international relationships.”

You need a bit of history to lend some clarity to this. NASA was the direct result of the Cold War scare when the Russians put Sputnik into orbit over the Earth in October 1957, thereby demonstrating they had missiles powerful enough to launch a nuclear attack on the nation. It galvanized the U.S. government into passing the National Defense Education Act in order to get more young Americans to go into the fields of science and math, and it prompted the creation of the National Aeronautics and Space Administration for the purpose of demonstrating American scientists and engineers could create bigger and better missiles.

In February, President Obama proposed that NASA abandon its Constellation program. As the New York Times reported at the time, it would involve abandoning “the rockets and spacecraft that NASA has been working on for the past four years to replace space shuttles.” It would impose a mandate “that any future exploration program will be an international collaboration”, not an American one.

NASA made news again in mid-June when it was announced that Obama’s amended budget request would slash $100 million from its operating funds in order to “spur economic growth and job creation along Florida’s Space Coast and other affected regions.” According to Speaker Nancy Pelosi, this somehow “revitalizes NASA and transitions to new opportunities in the space industry and beyond.” How many NASA engineers and scientists will now transition to jobs at Disneyworld?

Islam has not been “hijacked” by the likes of Osama bin Laden. Islam has always been about the conquest of the world and its greatest “scientific” breakthroughs since the 1980s have been the development of truck bombs and suicide bombers who have attacked targets from Bali to London, Madrid to Manhattan.

Obama’s Cairo speech on June 4, 2009 was filled with the kind of lies that portray Islam as a peaceful religion and one responsible for all manner of scientific breakthroughs from the invention of the magnetic compass to the printing of books.

Neither is true. What is true is that the Chinese had developed the compass and Islam had resisted printing books for a thousand years following its rise after 632AD.

Those under the oppression of Islam did not contribute to or experience the rise of science and the arts as both were rejected as un-Islamic. Many forms of music, for example, were banned in Islam. While the West was producing Galileo, Isaac Newton, Nicolaus Copernicus, Aristotle, Rene Descartes and Albert Einstein, not one single scholar of comparable stature was produced in the Islamic world.

Contrary to Obama’s mission to reach out to Muslims, they "reached out" to the West and, in America on September 11, 2001, destroyed the Twin Towers and attacked the Pentagon, killing some 3,000 victims.

Typical of the arrogance of Islam is the proposal to build a mosque within a block of ground zero in New York City!

Building mosques over sites held sacred to non-Muslims is an long tradition of Islam, from the mosque built over the Temple Mount in Jerusalem, to the countless other mosques in converted Christian churches, Buddhist and Hindu temples, as a demonstration of their intention to replace Western and Asian religions.

Permitting the building of the proposed New York mosque would signal submission to Islam.

Perverting and defunding NASA’s mission is evidence of Obama’s commitment to Islam.

I just recently heard that according to the Quran...the earth is flat! ("The earth is flat. Whoever claims it is round is an atheist deserving of punishment."
Sheik Abdul-Aziz Ibn Baaz, supreme religious authority of Saudi Arabia, 1993)...and also the sun and moon revolve around the Earth.
And we all know that earthquakes are caused by woman who dress premiscuously! Hmmm very scientific! Now I know why Obama is so smart! NOT!!

My question on this topic is why is no one challengening Obama on this issue. He has stripped NASA of the budget. We, the greatest Nation on this planet are now dependent Russia to get us to the ISS. As for me I am embarrassed that we we once the leaders in space exploration and now reduced to hitching a ride with the Russians.

From the beginning, I've tried to reserve judgment on Obama, even though every bone in my body was telling me that putting him in office was a huge mistake. I was hoping that maybe my viewpoint was just tainted by my conservative background, and that given a fair chance, maybe he could effect some positive change in America. He couldn't really be as bad as everyone on the right was saying he was, could he?

Well, obviously, my instincts were right. With the latest news about what's happening to NASA, the lawsuit against Arizona, the attempted override of the federal judge's decision on oil drilling, this Black Panther voter intimidation fiasco, the ACORN scandal, and the growing list of taxes and sneaky new laws that were hidden in the legislation they've rammed down our throats, I've come to the conclusion that THIS MAN, AND HIS WHOLE ADMINISTRATION SUCKS!

They've engaged in deliberate falsification of the job numbers, while actively working to destroy business in America. They've seized private businesses, ignoring our bankruptcy laws, stolen billions of dollars from investors, and handed it to the unions. They've passed radical legislation in direct opposition to the will of the people. They've done nothing but trample our Constitution, and to top it off, they've aided and abetted our enemies and encouraged illegal immigration in direct violation of their oath to defend us.

There's more, but I think I've said enough. We have a traitor in the White House. What are we going to do about it?

I recommend you pick up a copy of "The Manchurian Candidate" by Aaron Klien, published by WND Books.

I believe that the best possible use of NASA's resources now would be for an expedited mission to develop the "can't miss" golf club. Made from the "redistribuum" alloy that keeps Obama on the golf course, feeds his ego, and keeps him away from our country's business as much as possible. A parallel project that might go a long way toward improved public relations with people of all persuasions the world over would be a teleprompter jamming devise with a default mode that flashes local tee times available.

The Manchurian Candidate and Atlas Shrugged ... I can't think of two more relevant books given our present situation!

You are a great writer, I admire your work, all of it, but this is, to me, one of the best you've put out there...

Thanks, Fred. I tend to think I am only as good as my last commentary, so I keep trying to outdo myself.

Your kind words are appreciated.

Excellent piece with a most accurate conclusion.

Keep up the fine work

Alan,
What I find it startling that so many intelligent people are just now becoming startled. Not one bit of any of what is being done has surprised me at all. Naturally I didn't have any idea what the details were going to be, but the general philosophy and tactics being followed were completely predictable.

Everything he said during the campaign and everything said about him by his friends and allies should have made this obvious to everyone. The apple doesn’t fall far from the tree. I just can’t understand how smart people cannot see these patterns which repeat over and over again.
Rich

@ Rich: The only consolation is that the tide is turning swiftly against Obama and I am increasingly of the view that the Nov midterm elections will be a Democrat/incombent bloodbath.

If they try a lame-duck effort to pass these awful bills, we could see some serious protests and civil unrest.

Alan, they've openly declared that they plan to press on with their agenda, despite what happens in November. We'd better hope that November is SUCH a blowout that they're forced to retreat. Anything less than a blowout, and I think you're right ... it's gonna get rough. People are getting really angry now, and we're reaching the flash point in my opinion.

Thank you for the insightful assessment of Islam and how it is in play in the USA.
While this writer is just now learning about Islam, it seems that building a mosque at the site of Ground Zero in NYC would be like the USA building a mini-White House in Nagasaki and Hiroshima, Japan.
Granted the USA has had occupation troops and facilities in Japan since the end of that war. Maybe the mosque at Ground Zero would be seen as a sign of an Islamic battle victory.
Any feedback would be appreciated.