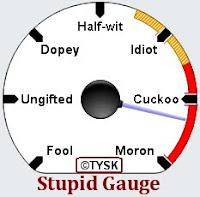 If you harbor the suspicion that a lot of voters are not bright enough to understand the issues, the candidates, or anything about those who hold public office, you are right.

Considering the critical issues affecting the security, economy, and the future of the nation, it is clear that we are being ruled by a cabal in Congress who vote the Democrat Party line without regard for anything other than political self-interest.

They got there, however, because of a solid core of voters who consistently demonstrate what dim bulbs they are.

Assuming some of these morons read the newspaper or got their news from the Internet sites of what is called the mainstream media, a 2004 Pew Research Center poll found that five times more journalists described themselves as politically “liberal” than those who said they were conservative.

That same year, a poll by the University of Connecticut found that journalists backed John Kerry over George W. Bush by a margin of two-to-one. Not much has changed since, except that daily newspapers keep going out of business; more than 120 dailies shut down in 2009.

Journalists keep asking themselves why???

Perhaps slobbering over Barack Obama and getting him elected might have contributed to a general sense of dissatisfaction among people whose I.Q. is higher than room temperature.

For many years there has been an annual Battleground Poll conducted by a bipartisan polling organization known for its rigorous methodology. It seeks to determine how Americans self-identify themselves politically. One of its questions asks, “When thinking about politics and government, do you consider yourself to be…” Then the respondent can choose from “very conservative, somewhat conservative, moderate, somewhat liberal, very liberal, or unsure/refused.”

The April 2010 poll results revealed that Americans overwhelmingly describe themselves as conservative. Over the years the percentage has never been less than 58% and, over the course of the years, 60.2% on average call themselves conservative.

This raises the question, of course, why the Congress is filled with so many “progressives” or “liberals”, depending what they call themselves or why Ronald Reagan’s two terms and George H.W. Bush’s single term was followed by William Jefferson Clinton? He, in turn, was followed by George Walker Bush. Voters then turned to a completely unknown candidate with no experience beyond having been a “community organizer”, Barack Hussein Obama.

Nothing resembling logic explains this, but there is a factor that stands out in poll after poll and that is raging stupidity.

A casual look at poll results in just the past month gives evidence of this. For example, despite the greatest man-made disaster of recent times, the BP oil spill, Rasmussen Reports revealed that 25% of adults nationwide had a favorable opinion of BP. Indeed, 6% had a “very favorable” opinion of BP.

Rasmussen polls asking for opinions of Janet Napolitano, the Secretary of Homeland Security, revealed that 32% had a “somewhat favorable” opinion of this pinhead and 21% had no opinion regarding her performance in office.

Asked about Attorney General Eric Holder, one in four voters (26%) “still don’t know enough about Holder to venture any kind of opinion about him” and 35% professed to hold a favorable view. This is the AG who criticized the Arizona illegal immigration statute without having read it.

Finally, for my purposes, there are the polling results regarding whether the nation is on the right or wrong track these days. As recently as late June 28% of likely voters said that the country is heading in the right direction!

We have a Congress voting on bills, often in excess of two thousand pages, without knowing what they entail or the changes they will impose.

We have a President who has taken barely a year and a half to double the national debt, crisscrossed the world to apologize for protecting huge portions of it from despotism, has nationalized one sixth of the economy with a hated healthcare act and is pushing for a Cap-and-Trade bill that will impose crushing taxes on all energy use. He also intends to raise our income taxes in the midst of a raging Recession.

You don’t have to be a statistician to figure out that somewhere between 25% and 30% of the voters are stupid beyond redemption, oblivious to events and trends that show a nation in deep trouble.

I suggest this is the core constituency of the Democrat Party that has been pandered to from the days of Franklin D. Roosevelt. The remainder, the 60.2% who identify themselves as conservatives had better get to the polls in November to save this nation from utter ruin.

Excellent points, Alan. This reminds me of the pre-election YouTube video in which voters who expressed a preference for Obama were asked if they like him more because he was pro-life or because of his choice of Sarah Palin as his running mate. Most instantly picked one or the other. Duh! Lots of morons out there voting for Democrats.

I've also wished that voters had to pass a short civics quiz before they received a ballot. Who's the Governor? Who's the Mayor? How many stars on the American flag? I'm sure quite a few people would be stumped by those questions.

Some News from France, a socialist and pro-islamic dictatorship :

1)A prefect sentenced to 1 500 € of penalty for "racist talk" because he said "it's like in Africa here !" in a french airport.

2) A former french minister, Martin Hirsch, said on TV that "the real integration in France will be when french catholics will name their children "Mohammed" ".

What a wonderful country...

@Biblioteque:
It is astonishing and depressing to see what has happened to a great nation in just two or three generations.

I'd say come to America, but you have to be Mexican and sneak in across the border to get in these days.

I can predict a lot of requests coming from France (and Europe in general) to go to the USA (or Canada, which is a little bit easier) within the next years.

The political class is clearly against french people, french culture and french history. The 1793 atheist revolution is not over, and Islam is a great solution to destroy catholicism forever...

I just want to discuss your use of the term 'democracy' in the previous post.

We do not now, or ever have had a democracy , here in the USA.
Hopefully we will never have one!

Benjamin Franklin was asked, by a woman whose name escapes me momemtarily, as he was exiting the Constitutional Convention, 'What, Sir, have you given us ?' To this he replied; 'A Republic, ma'am, if you can keep it'

Our Forefathers abhorred a democracy as much or more than they did a standing army. Realizing that it is but one step to anarchy, then another step to a dictatorship.

They gave us a Constitutional Republic, comprised of the rule of law as denoted in our Constitution.

Thanks ! Keep up the good work !

I agree completely with Rocky Bensch. Calling the USA a democracy is no more than playing into the hands of those who would destroy our republic. Democracies are the most fragile of governments and historically have always deteriorated rapidly into dictatorships, as did the democracy established by the Russians in the first Russian Revolution of 1917.

With that exception, your blogs are always spot on, Alan.

Here's a definition of democracy from a dictionary website:

I must digress. It doesn't matter what some dictionary website refers to our country as.
It was established as a Republic and , hopefully, it will remain such, or I'm afraid, that it might die. Much to our current leader's delight, I do believe.
I know that it might seem that I am picking, but semantics, or word definitions & meanings , are important, if we are, as a people, to understand our origins and our Founder's beliefs and designs with which they undertook to establish this Great Nation!

People can practice their U.S. civics knowledge at http://CivicsQuiz.com.