The People Versus the Government 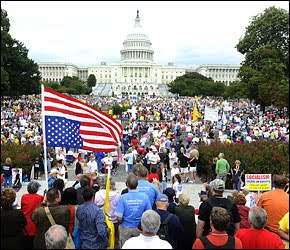 These are truly extraordinary times. With every passing day, we are witnessing what can only be called the People versus the Government. The distrust and disdain Americans of all political persuasions feel toward the White House and Congress is extraordinary.

A June Gallup Poll revealed that just 12% of Americans expressed confidence in Congress, “the lowest of the 16 institutions tested this year, and the worst Gallup has measured for any institution in the 35-year history of the question.” A recent Rasmussen Reports survey found that 68% believe the nation’s Political Class doesn’t “care what most Americans think.”

The so-called Stimulus Act was widely seen as a “porkulous” act; over two thousand pages filled with Congressional pork projects passed off as “shovel ready.” It promised to reduce unemployed which since has risen—-officially—-from 8.5% to just under 10%.

There was widespread opposition to the government takeover of General Motors and Chrysler as opposed to an orderly process of bankruptcy that would have permitted changes to restore both companies. The arbitrary White House intervention left bond holders and investors in the cold. It was clearly a bailout for the United Auto Union. This was then followed by the astonishingly stupid “Cash for Clunkers” legislation and the closing of selected auto agencies, some of which were sales leaders.

The overwhelming majority of Americans did not want the healthcare reform act to be passed and now want it repealed. Much has already been written about how it will raise costs and decrease services while driving many physicians to abandon Medicare because of its low payment schedule.

Then came the financial reform act, another huge bill whose contents are still being analyzed, but which significantly avoided any reform of Fannie Mae and Freddie Mac, the two government “entities” that were responsible for the sub-prime mortgage crisis. Both agencies have been seized by the government, but both still own over fifty percent of all U.S. mortgages.

Healthcare, financial services, auto manufacturers; at what point will there any “private” enterprise left in America that is not totally controlled by the government?

What surprises me most is the lack of protest marches in Washington, D.C. The September 2009 rally drew close to a million utterly peaceful people who were opposed to Obamacare. The Tea Party movement has been staging events that have drawn large crowds.

I suspect it has much to do with a patient electorate counting down the days until the November 2nd elections. They are more critical to the future of the nation than any since the election of Abraham Lincoln just prior to the Civil War when southern States were calling for secession.

We are witnessing an increasing friction between the States and the federal government and there is no telling how that will manifest itself in the years to come. The decision by a federal judge regarding Arizona’s effort to force the federal government to do more regarding the wholesale invasion of America promises to be a major issue in both the midterm and 2012 elections.

For me, the most interesting aspect of the dissatisfaction with President Obama is that occurring in the Democrat Party.

“Rather than being a unifier,” wrote Caddell and Schoen, “Mr. Obama has divided America on the basis of race, class and partisanship.” The number of leading Democrat office holders, past and present, that are outspoken in their criticism is becoming a daily event. “President Obama’s divisive approach to governance has weakened us as a people and paralyzed our political culture,” said the pollsters.

None of this bodes well for Obama, despite his ability to raise money for the Democrat Party’s candidates in November and for himself in 2012. It is widely reported that Wall Street, normally a reliable contributor to Democrat coffers, is conspicuously absent at fundraisers.

All this comes back to the fact that Obama is Marxist ideologue. He is also a liar, a trait no one likes, and a narcissist who gives continued evidence of regarding the presidency as a daily opportunity for self-indulgence and bottomless ego satisfaction.

A recent Investor’s Business Daily editorial said, “As Americans suffer economically, President Obama golfs, vacations, campaigns, appears on a frivolous talk show—and vacations some more. Gee, don’t we have a war and other problems to attend to?”

Obama may not be easily removed, but he can be politically neutralized if Republicans can gain control of Congress in November. There are barely 900 days left in his first and hopefully last term; still time for him and his cadre of czars to do more damage.

I'm not so sure that even GOP control can stop Obama...

As long as his ability to issue Executive Orders exist, he is still a danger to this nation...

Obama needs to be removed, and at this point in time I am not terribly concerned about HOW he is removed either...

By vote, by military coup, as long as they take Biden, Inouye, Pelosi, Shrillary and the rest of that unholy debacle called a Cabinet with him...