The Islamic War for the Future of the World 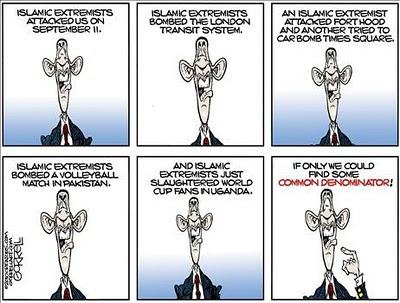 Muslims do not take kindly to criticism of any kind. Their solution, as often as not, is to kill anyone who criticizes them. Indeed, the Koran’s punishment for converting to another religion is death.

Islam’s primary weapon in recent decades has been terror. There are literally thousands of terrorist acts occurring throughout the world these days. 9/11 was the quintessential Muslim act of intimidation, but it was preceded and has been followed by many others.

In an act of political correctness and national suicide, Americans elected Barack Hussein Obama President in 2008. He has made no secret of his Muslim roots and beliefs. His very first television interview as President was with Al Arabia and, most recently, one of his appointees, Charles Bolton, the director of NASA claimed that he had been instructed to redirect that agency’s objectives to include a mission to the Muslim world.

On September 25, 2009, there was a National Day of Prayer for Muslims that was held on Capitol Hill near the White House. There were more than 50,000 Muslims in attendance and as this is being written, Muslims are attempting to build a huge mosque within a block of Ground Zero in New York.

My friend, Amil Imani, born in Iran, an American citizen, has been courageously outspoken on the topic of Islam. Recently he published a book, “Obama Meets Ahmadinejad” that uses satire to reveal some fundamental truths about these two men. Ahmadinejad, of course, is the president of Iran and so hated there that crowds filled the streets of Tehran to protest. Iran is the classic Islamic nation that uses brutality and oppression against its own people.

Imani’s book has already been hailed by some of the leading voices warning against the Islamic threat to freedom and liberty. They include Robert Spencer, the author of “The Politically Incorrect Guide to Islam and the Crusades; Dr. Wafa Sultan, author of “A God Who Hates”; and Dr. Ali Sina, the author of “Understanding Muhammad and founder of FaithFreedom.org. Let me add my recommendation that you get a copy for yourself.

In his most recent commentary, posted July 14, “Islam Must Be Stopped in America”, Imani makes a powerful case for the ways Muslims are using America’s traditional tolerance to make inroads that would impose Islam on the nation. He ruthlessly exposes the lies that Islam is a “religion of peace” or that Muslims believe there is “no compulsion” to convert.

“The Muslims,” Imani wrote, “and their apologists quickly run out of their few cards, and the rest of the Islamic deck is all about intolerance, hatred and violence toward the infidels, toward all others who are not true Muslims, and even toward those who consider themselves Muslims. Shiites, for instance, judge the Sunnis as traitors to Islam, and Sunnis condemn the Shiites as heretics. Each side deems the other worthy of death.”

Infidels, all those who are not Muslim, can see the truth with their own eyes as they observe “the savage Shiite-Sunni bloodletting in Iraq; the genocide in Sudan’s Darfur region; the Somali killings; the Iranian mullah’s murder of their own people, and the support of mischief abroad; and the incessant terrorist acts of Hamas, Hezbollah, and Islamic Jihad on Israel.” There are so many other examples that only fools would cling to the belief that Islam does not pose a threat to the world.

From the beginning of the Obama administration to the present, every effort was made to avoid identifying the enemy; most egregiously expunging any reference to “terrorism” from the language of its top officials including the Attorney General, the Director of the Department of Homeland Security, and a top national security advisor to the President, John Brennan, who has asserted that jihad does not mean war on the infidels. Tell that to 1.2 billion Muslims!

Americans have just over 900 more days of the Obama administration and the fate of the nation literally hangs in the balance until it is replaced.

Hi Mr. Caruba. When I first saw the cartoon and hadn't finished reading it, I thought it was going to be a comment that obama made yesterday (or a few days ago) about how he finds Al Quaida as a racist group.
Sorry, that stupidity aside, very interesting article. I've heard of Mr. Imani, and I will have to look for his book at the library on my next trip.
I have read quite a few books on Islam and the Q'uran, so I'm not totally ignorant about that religion. As I was reading your article though,all I could think about is people's ignorance, the "religion of peace" and all they want is understanding etc.
And this business of them wanting to build a mosque at ground Zero.
They claim because it will be a center for interfaith meetings and learning, and a chance for the West to understand they only want peace and to be able to practice their religion without persecution.
Excuse me, but that is a pile of hooey.
People like Obama, and Bloomberg and others keep spreading the same lies, and the hypocricy makes me sick.
First off, how is it going to improve relations by building a mosque at the site where their own murdered so many people? They seem to love building bigger mosques on top of places they see as conquered. If they want understanding, how about them forgetting that idea? They won't because it's not understanding they really want- it is submission from the rest of us, and to slowly take over. They will not be satisfied until we are under Sharia law.
For those who don't believe folks when we tell them- all they need to do is look around the world as see where their big mosques are.. Jerusalem comes first to my mind. Right smack on the Temple mount.
If these people were so tolerant and wanting people to truly practice religion without persecution, they need to look at themselves first. When they allow Christians to build a cathedral in Mecca, maybe I may believe them. For now, I will continue to hear their actions instead of their words. Their actions say nothing except jihad. And I'm not meaning "the internal struggle" either.
God Bless you Mr. Caruba. Thank you for being so willing to speak out on things like this. Most people shy away and not want to offend, or say they don't want to start a holy war. I have news for them- we're already in one, and we didn't start it.

What are you trying to say with this nonsense, Caruba?

Yes, most of the modern terrorist threats to the United States are Islam - places like North Korea excepted. But what are you suggesting - that therefore all Muslims are our enemy?

The world's most populous Muslim-majority nation is Indonesia. 86% of the country is Muslim. Now, they are generally not considered a supporter of terrorism, but they ARE Muslim. Should we launch a preemptive strike and attack them? Or maybe that's too much - do you think we should stop allowing Indonesian flights in to the country?

No, probably neither of those things. Probably you think, "Well, they haven't done anything to merit that. It would be wrong to consider them enemies just because their Muslim."

And then you have to face the fact that despite your vitriol, it's not being Muslim that makes someone an enemy of America. It's a lot more than that, and simplifying it down to religion is puerile.

As noted, throughout Islamic history, it has acted aggressively against other faiths and its fundamental belief is that they must be eliminated and replaced with Islam. That's a formula for trouble.

Finally, Islam divides the world between Dar es Harb and Dar es Islam. Dar es Harb is the world of "war", which is represented by all places in which Islam is not the dominant faith.

I have been saying that since day one, and aside from a few isolated incidents, I have yet to hear the kind of condemnation of terrorism that MUST come from the Muslim community if they ever hope to be considered our friends. Muslim Americans have an especially significant obligation to denounce terrorism if they want to be welcome here. Until they do so, most people will be keeping a watchful eye on ALL of them, and will probably assume the worst.

I feel the same way when it comes to several other hate-based groups in America today. Having Black Panthers publicly declaring their hatred for "crackers" and La Raza openly declaring that they want to seize all or part of the United States makes them our ENEMIES. Anyone, black, Mexican, or otherwise who doesn't DENOUNCE that sort of behavior becomes complicit in my opinion, and will suffer the consequences.